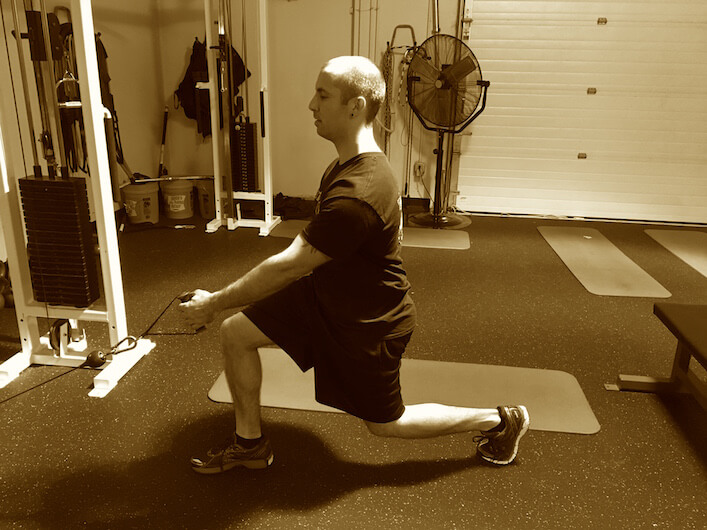 The debate between unilateral (single-leg) versus bilateral (double-leg) lifts has raged on for nearly a decade.

In one camp, you have coaches that really, truly believe that single-leg lifts are on par (in all respects) to bilateral lifts.

And on the other hand, you have coaches who would never, ever, consider having their athletes perform a circus stunt like a single-leg squat or RDL.

Are single-leg and split-stance exercises the be-all, end-all of training?

And if not, do they have any role in a program?

In my experience, there’s definitely a role for these exercises in an athletic development program. Here are five potential reasons you should include single-leg or split-stance exercises in your programming.

(Side note: Going forward, I will refer to single-leg and split-stance exercises collectively as “unilateral” exercises for the sake of brevity. I know it’s not 100% scientifically correct, but I hope you’ll let me slide in the name of better writing!)

Let’s get this out of the way first…

I’ve talked about this extensively in the past: Basic biomechanics tell us that prime mover output is going to go down the second you go from a bilateral exercise to a split-stance or single-leg exercise.

A narrower base of support means less prime mover output and an increase in stabilizer function.

Furthermore, the loads used in bilateral exercises are far more similar to what we see in sport, so I think it’s time we put that argument to bed. 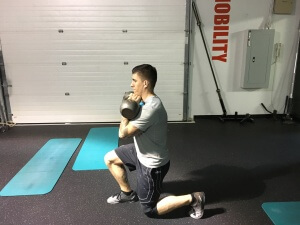 However, I’m not poo-pooing the idea of strengthening each leg independently of each other, because there is merit there.

I think there are definite benefits when it comes to strengthening the body in a unilateral fashion, as the motor program is unique.

But perhaps more importantly, we all know that we aren’t perfectly symmetrical creatures.

We have asymmetries due to our internal anatomy, injuries and compensations we’ve developed, or even due to our sporting backgrounds.

One of the biggest benefits of unilateral training is the ability to build strength independently between legs. Even if we can’t get as strong with a unilateral exercise as we can with bilateral exercises, that doesn’t mean they aren’t valuable.

And in fact, I think the next four points are the real reasons you should be using split-stance and single-leg exercises, anyway.

As I alluded to before, when you move from a bilateral stance to a unilateral exercise, you narrow your base of support (BOS).

The bad news with regards to a narrow BOS is that you can’t move as much weight. Prime mover output goes down, and stabilizer function goes up.

You’re doing a heavy split-squat exercise with a barbell on your back. As you’re trying to set-up, you’re constantly trying to catch yourself from tipping over.

You’re repositioning your feet constantly in an effort to get set-up “just right.”

First off, this is the exact you can’t load these exercises to the same degree as a bilateral exercise. Your primary goal isn’t to push weight – it’s to keep you from falling flat on your face!

But herein is the real benefit of the exercise:

Split-stance and single-leg exercises teach you to stabilize and control your body effectively. 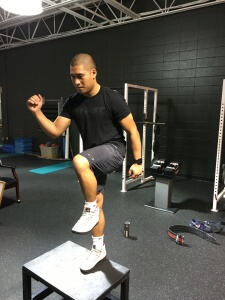 This is also why when it comes to unilateral training, load should not be the primary focus, especially early-on. Again, if I want to load, I can use a big bilateral lift like a squat or deadlift variation.

Instead, I want to focus on stability and control. It’s not as sexy as uncorking a big squat or deadlift, but when an athlete is moving better and more resilient, the results speak for themselves.

In my opinion, learning to effectively stabilize the core, hips, knees, ankles and feet are a huge benefit of unilateral training, and one that should not be overlooked.

Inhibition is another primary reason I’m a huge fan of split-stance work.

Our goal should be to maintain a “cylinder” position for the core: The lower rib cage is down and the pelvis is facing up. This posture allows the diaphragm and pelvic floor to face each other, and makes for an optimal position to drive airflow throughout the body.

However, we know that many of our athletes walk around in a scissored posture. The lower rib cage is flared up, and the pelvis is in a position of anterior tilt.

We could also call this a state of hyperinflation, or even more simply, an extended posture.

Muscularly, this drives issues as well. The hip flexors and lower back muscles are constantly “on,” trying to pull the next breath in to the body.

To address this extended posture, we not only have to address the breathing dysfunction itself, but then challenge our athletes by having them maintain this “cylinder” in different body positions.

Split-stance exercises such as split-squats, lunges, and rear-foot elevated/Bulgarian split-squats, when done correctly, inhibit the rectus femoris on the “back” leg, which makes them a powerful tool in our arsenal.

The big focus here has to be on execution. Far too often, I see athletes get into a really wide stance front-to-back, which drives them even further into extension (as well as blows out their anterior capsule, but that’s a discussion for another day).

Instead, take a more moderate stance width where you can feel the whole front foot, while simultaneously maintaining that ribs down/pelvis up position throughout.

This may incredibly simple, but I guarantee if you have your athletes do this the right way it’s going to be much more challenging than expected!

Many moons ago at IFAST, Nick Winkelman talked about how he liked using wall sprint drills. It wasn’t so much that he loved the drill itself, but because it allowed him to create context for teaching acceleration postures to his athletes.

One of the reasons I personally love unilateral exercises is becasue they give me an opportunity to coach my athletes in a low-load environment.

When it comes to big lifts like the squat and deadlift, it’s really easy to get caught up in the weights being used.

Even if technique is good, it doesn’t provide the best opportunity to coach movement.

On the flip side, unilateral exercises are typically lower in load, and we can work on specific postures, positions or concepts (such as improving center of gravity) that allow our athletes to better express the athleticism they already own.

For instance, I’ve been talking a lot about the “whole foot” concept lately. This can be really tough in big movement patterns like squatting or deadlifting, as those patterns are strongly ingrained in the system.

But I can very easily give a client an offset squat (video coming soon!), or a step-up and they can quickly pick up on the concept.

As a coach, my goal is to teach athletes to move well first, and unilateral exercises are just one more opportunity for me to do that.

When it comes to athletic development, we all know that sports are played in three planes of movement.

However, when it comes to the weight room, it’s really easy to fall in love with big, compound lifts like squats, deadlifts, etc.

And rightfully so – they are great tools for helping our athletes get bigger and stronger.

But that does not mean they are the only exercises we should use in the weight room. 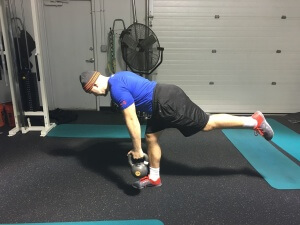 After all, if our athletes play sports that occur in multiple planes of movement, why are we only training them in one plane of movement (i.e. the sagittal plane) when we get them in the gym?

Unilateral exercises allow us to maintain and express our movement variability, or our body’s ability to move freely in multiple postures, positions, and planes of movement.

Here’s how I think about this: We all know that in sports, things are chaotic. Someone runs into us, we get into a odd body position, etc.

This is where things can go really bad, really fast.

If all you do are sagittal plane lifts, you can become really stiff, rigid and limited in your range of motion. Think about a high-level powerlifter – they have “enough” range of motion to break parallel and get into specific body positions, but that’s about it.

This stiffness and limited range of motion is a specific adaptation they’ve created to be successful at their sport.

However, athletes need a broad mix of physical qualities, not just strength. They need the ability to bend when necessary, the freedom to move in multiple planes, etc.

Basically, they need some wiggle room (or margin for error) when it comes to movement.

When you combine increased movement variability with improved stability and control, this is arguably the biggest benefit we glean from single-leg and split-stance training.

Single-leg and split-stance exercises provide a myriad of benefits that can help your athletes perform at a higher level, while simultaneously developing qualities that can help them stay healthy.

The key to a high-quality program, then, is finding a blend of bilateral and unilateral lifts that allows your athletes to reap the benefits of both styles of training.