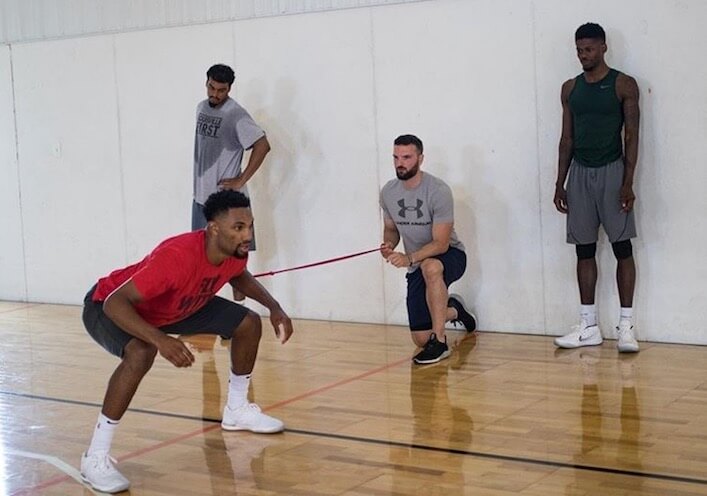 It’s been a little while since I wrote a new article, and while the podcast is still humming along, there’s something very humbling about writing that I have really missed.

As such, I’m going to jump back in today with a “Random” article, with the hope being that this will spur me into more articles and writing going forward.

So without any further ado, let’s jump right in!

I have talked about this numerous times now, but I’m constantly shocked at how many really good athletes don’t understand movement angles. 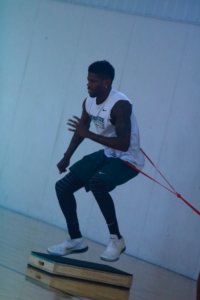 When I was doing more Combine/Pro-Day training last spring, this was readily apparent when it came to acceleration drills. The goal in acceleration is to create forces that are driving down and back, which can be a difficult concept for athletes to understand initially.

(And is often compounded if they don’t have the physical prerequisites to get there as well, but that’s a whole ‘nother can of worms.)

Now that I’m working with more off-season basketball players, this applies not only to linear acceleration but to lateral acceleration and deceleration as well.

When a basketball player is shuffling and needs to decelerate, I find many of these athletes shy away from aggressively getting their foot out wide.

However, getting their foot out wide is not only a great way to decelerate their body and slow momentum, but gives them the proper angle to re-accelerate back out of that cut.

When coaching your athletes, always look at and work to improve their angles. Even if this is the only thing you accomplish, chances are your athletes will move more effectively as a result.

As you know, I coach high-level athletes from a variety of sports.

So when it comes to my social media universe, I have coaches and followers that span the sports universe.

A while back I asked a very simple question – and got a question I really want to elaborate on.

What types of exercises/workouts do you like to focus on when training soccer players?

Whether it’s football, basketball, or soccer, I’d like to think that the deeper down you look, the more you realize one thing:

Which is why when you look at many of my training programs, especially early-on, the programs might look very similar.

Focusing in a bit more, the R5, or resistance portion of the workout, is going to look eerily similar across sports.

We’re going to push and pull.

And we’re going to include accessory movements that improve stability, control and movement variability.

So let me circle the wagons a bit here:

Much of the resistance training for my athletes looks the same regardless of sport. If possible, I want all of my athletes to be able to squat, hinge, push-up, lunge, pull-up, row, etc.

However, the subtle differences could include:

On the flip side, the biggest differences you’ll see across sports are the movements involved, as well as the energy-production needs of the sport.

To be really general, a football player will probably be exposed to higher external loads, and energy system demands that are very alactic-aerobic in nature.

On the flip side, my soccer athletes will not be moving the same loads, but their capacity demands will be much greater in nature.

I’ll elaborate more on this later, but start thinking more about how your programs are similar (or different) across sports.

I think the thought process alone will be illuminating for you.

3. How Do You Build Physical Qualities When Movement Quality is Off?

This is a question I’ve struggled to reconcile in my monkey brain for a while now.

Let’s say you have an athlete in for a very short window of time. They don’t move particularly well, so loading them up and pushing the intensity of the workload in the weight room may not be in your best interest.

I’m a big believer that efficiency has to come first. If you can get an athlete to move air into the right places, if you can improve their movement variability, and if you can give them stability and control in the right areas, you’ll often see measurable performance improvements just by eliminating inefficiencies.

I saw this a lot with our off-season basketball guys. After all, many of them are going to go in and be asked to perform combine-style tests (vertical/approach jump, lane agility, etc.) so they want to perform well when they test.

So if you look at it from the athlete’s perspective, using a soft approach to training can be a tough sell, especially if they aren’t injured.

If they don’t hurt, in their mind, they’re ready to train and be pushed. So why is coach holding me back?

So this question keeps coming up in my thought process:

How can you build physical qualities (such as speed/strength/power), while simultaneously improving movement quality? 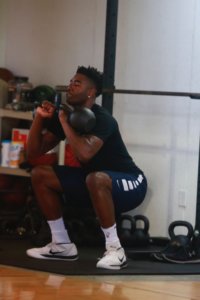 What I’ve tried to do here if maximize their strengths, while simultaneously minimizing their weaknesses within the program.

Let’s say a kid just really struggles to squat. Sure I could keep pushing the back squat or front squat variations, but it’s probably not going to help my cause.

Instead, I’m going to find an exercise like a goblet or 2-KB front squat where they literally can’t screw it up, and I’m going to push them as much as I can there.

Now here’s the cool thing about this…

Most athletes have some context as to how “strong” they are in the basic barbell lifts.

In other words, they “know” how much the front squat, back squat, etc.

But if I change the context of the lift/drill/exercise, now they’re less resistant to using what could be perceived as a lighter weight.

I can’t tell you how many times I’ve done this using the exact example above. An athlete comes in and thinks they’re a 225# front squatter, or a 315# back squatter.

I tell them we’re going to use a heavy goblet or 2-KB front squat to teach them to load their body effectively.

Then voila! If you’re coaching it up, and they’re moving it well, they don’t care as much about the total load.

Instead, they’re just focused on how it feels, and on doing it right.

If you struggle with athletes who are always chasing load, instead of fighting them head on and asking them to drop the weight, instead work to change the context.

4. Make Them Feel Their Feet.

Another thing that I’m constantly shocked by is how poor many athletes are at feeling their feet.

Now I’m not talking about 5-10 years ago where we had everyone in Vibrams or walking around the facility barefoot.

No, I’m simply talking about getting an athlete to feel their whole foot – the toes, the heels, the instep/arch, and the outside of the foot.

I remember when I was coming up and I told almost all of my athletes:

The weight room is the only sport where you want to be on your heels versus your toes.

And I came up with all kinds of analogies for this.

“Can you wiggle your toes in the bottom of an RDL?”

But over the years I’ve really come to reconsider that position.

When you exaggerate being on your heels, it almost immediately puts your spine in a bad position. Now you’re forced to lock your spine into extension to control its position.

Now when my athletes are squatting and deadlifting, I want them to feel the whole foot instead.

Below are two videos – one on the concept of “Tripod” foot, the second on how this applies to a specific exercise, like RDL’s.

When you can feel your whole foot in a squat or deadlift, this helps you “stack” your body top to bottom.

Furthermore, feeling your whole foot helps you maintain your center of gravity and balance, so that you can learn to be a pusher vs. a puller.

But this is just in the weight room!

When it comes to our speed and agility work, this is critical as well.

We had Lee Taft in last week, and he was describing this as well – how we get so obsessed with one area that we forget about the big picture.

News flash: When one area of your foot is carrying too much of the load, it’s going to limit your movement options.

For example, try sprinting straight ahead and then stopping/decelerating without finding your heels.

(I had an athlete this summer that tried for an entire session, and needless to say, it didn’t go well for him!)

The key, then, is to feel that whole foot, but to bias your weight shift to a specific area.

When lifting, you want to feel your whole foot, but the weight may be biased slightly to the heel.

If you’re doing linear speed work from a parallel stance, start in an athletic position with the whole foot in contact with the ground but the weight biased slightly to the forefoot.

And last but not least, if you’re doing lateral speed and agility work the starting position will have the feet wider than the hips. As such, feel the whole foot but be biased slightly towards the arch.

I guarantee if you can teach your athletes to feel their whole foot, it can be an absolute game changer – both in the gym, or on the field, court, or pitch.

5. The Sagittal Plane MUST Come First.

This last one is going to be a bit of review, but that doesn’t mean it’s not important.

It’s like the thing you learn in the first week of school, but it’s so important, you need to remember it all the way until that cumulative test you take during finals week.

Quite simply, you must learn to control the sagittal plane first.

I still seeing athletes doing all this cool work in the frontal and transverse planes, yet it’s obvious they have no control over their sagittal plane.

Work to get that pelvis as level as you can front to back first.

Work to neutralize that thorax and get the air flowing first.

When you do this, so many little things come around.

You tend to get hip extension back.

You tend to get hip rotation back.

And lo-and-behold, you tend to get shoulder rotation back as well.

(This is something I’m sure Eric will be talking about at his Shoulder Seminar here in Indianapolis in November. If you’re in the area, I’d highly recommend signing up!)

Now with that being said, here’s the bad news:

There’s not one “thing” that’s magically going to fix this.

It’s not one targeted breathing exercise or reset.

It’s not one specific stretch.

And it’s not simply moving from back squats to front squats.

If you want to unlock movement quality and truly take your athleticism to the next level, everything in your program needs to addressing controlling the sagittal plane first.

I’ll probably do a more thorough write-up on this in the future, but if you want a bit more insight, here’s a little side reading for ya: Sagittal Plane First.

All righty friends, that does it for me.

Thanks so much for reading and have a great day!