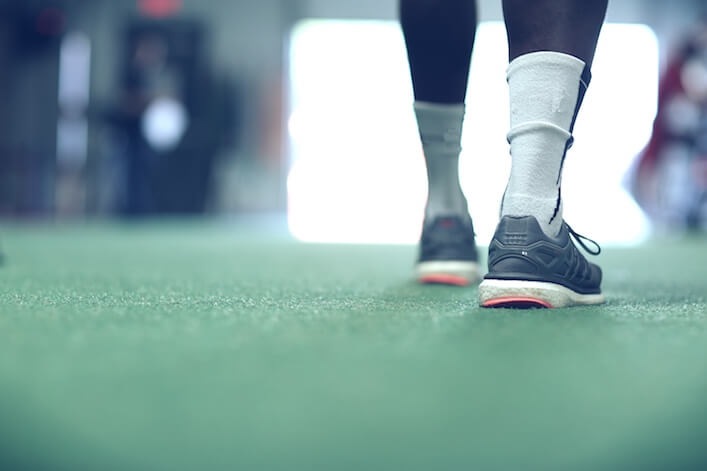 One of my favorite athletes of all time, Kathryn Voelker, had just gotten a soccer scholarship to play at Purdue in the fall.

Life was grand – except it wasn’t.

KDawg had struggled with conditioning her entire career.

Here was a girl that had some pace and explosiveness, and could do what every coach wants:

She put the ball in the net!

But here’s the thing – after 15-20 minutes of hard work, she was totally gassed.

Poor conditioning was obviously impacting her on the field. But then we got the really bad news:

If she didn’t pass the pre-season conditioning test, she would immediately be cut from the team!

Needless to say, we had our work cut out for us.

I was a complete neophyte when it came to conditioning programs back then, and I didn’t have a system for writing programs.

(BTW – if you want a great starting point for writing programs, read this article from Joel Jamieson.)

So my good friend Eric Oetter and I sat down and we fleshed out what would be the next 12 weeks of KDawg’s life.

And of course, a nice dose of lactic work at the end! 🙂

Since that day, I’ve made a ton of mistakes with regards to my conditioning programs.

Those mistakes not only allowed me to learn more about conditioning, but most importantly, have helped me write far better conditioning programs since then.

So without any further ado, here are six things that I’ve learned over the years when it comes to writing conditioning programs. Enjoy!

One of the most important things you can do when you first write conditioning programs is to begin with the end in mind.

Of course you want to make your athlete more resilient so they can play longer and fatigue less, but smart conditioning does so much more than that.

When you have a robust aerobic energy system, your body is more efficient and effective.

And the coolest thing is, as conditioning improves you can also tolerate and handle more training stress. More reps, more sets, more intensity – the fitter you are, the more you can handle and adapt from.

But let me tell you one of the biggest secrets with regards to conditioning:

And all things being equal, the athlete who can do more skill-specific work, wins.

Pro Tip: Before you lay out a program, determine what your short- and long-term goals are for conditioning.

Why are you having them condition? What do you hope to get out of it?

Have a mental image for the type of athlete you want to create. Once you do this, writing programs will be infinitely easier.

The Power-Capacity continuum holds all the secrets when it comes to writing conditioning programs.

Do your athletes need to be big, strong and powerful – with minimal conditioning needs?

OR do you need athletes that are extremely well-conditioned, but still need to retain as much speed/strength/power as possible?

We all want to create well-conditioned athletes, but smart conditioning is based on context.

Furthermore, if we want to get really nitty-gritty, how do the conditioning needs differ between different positions in the same sport?

In soccer, a wide midfielder is going to run a ton, a center back will run a bit less, and a goalie will do almost zero running.

In football, you have skill players, lineman, special team kickers and quarterbacks. Each one has different needs with regards to conditioning

Do you see where I’m going with this?

Quite simply, the more you know about the athlete standing in front of you, their sport, their position, and their style of play, the better program you’ll be able to write.

Pro Tip: Make it a goal to really understand the needs and demands of your athletes’ sport.

A few years back, I was watching this awesome video by Patrick Ward.

In his talk, Patrick was describing how one of his goals was to give his athletes a “buffer” for various physical qualities.

Now I’d heard Gray Cook talk about this years before with regards to movement quality, but I hadn’t thought of it in this way before.

This was further impressed upon me after talking to Keith D’Amelio in a podcast last year.

Keith talked about how there are certain athletes with horrible movement quality (or poor position/alignment), that never seem to break down.

How on Earth is that possible?

There are numerous reasons why an athlete does (or does not) get injured, but one of the big ones is having great work capacity and conditioning

I’ll even give you an example: If you would’ve asked me 5-10 years ago what NBA pro was most likely to break down, I would’ve told you LeBron James.

If you look at James’ body, he’s got a massive rotation through his right tibia. This thing just screams at you, and I felt like it was a knee issue waiting to happen.

Yet James has been to the last SIX NBA Championship series’, and he consistently logs some of the biggest minutes in the league.

And outside of an off-and-on back issue, he’s been incredibly resilient and healthy over the course of his career.

Now I’ve never trained LeBron myself, but one thing I can tell you is this:

So to bring this full circle, I think it’s fair to say the LeBron has a huge physiological buffer zone that helps him stay healthy. You’d be wise to do the same.

Pro Tip: Make it a goal to give your athletes just a tad more conditioning than they need.

You don’t want to do so much that it robs them of their natural speed, strength, or power, but even a little extra can go a long way.

Giving your athletes this buffer not only goes over well with a coach, but will also go a long way to keeping them healthy. 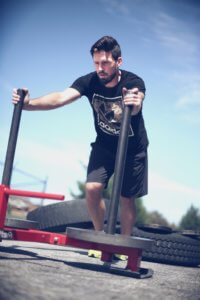 When you’re training a young athlete, I’m all about building an athlete.

Not a baseball player.

Not a soccer player.

Not a football player.

However, as an athlete gets more specialized, there conditioning must become more specific as well.

You’ll still start the off-season with some general physical preparation, but as you move forward, the goal is to become more and more specific.

Think about it like this: Running on a treadmill can help you get the physiological adaptations that you want.

Whether it’s a higher VO2 max, a more efficient heart, or improved oxidative enzymes, I will never argue that general means can develop physiology.

But sport is so much more than physiology. High level sport pairs not only physiology but mechanics as well.

Not only should we develop our athletes from a physiological perspective, but with regards to the forces involved in their sport as well.

As your off-season goes on, make it a goal to get more and more specific with your conditioning.

Running that incorporates speeding up, slowing down, and/or change of directions can go a long way.

Some of the best coaches in the world (like John Cone) do a beautiful job of merging the worlds of physiology and biomechanics.

With the appropriate creation of small-sided games, you get a blend of three critical elements:

Whether it speeding up and slowing down, changing direction, or even getting some skill work in, the more specific you can make your conditioning, the better!

#5 – Do NOT Shy Away from Lactic/Glycolytic Work

One big mistake that I made early on was neglecting lactic/glycolytic programming in my work.

Now I know what you’re thinking:

“But almost all field and court sports are alactic aerobic. Why on Earth do we need lactic work Mike?”

Time motion analyses in soccer show an athlete might go hard for 2-4 seconds, and then get a 60-90 second break.

In football, the average play last 5-6 seconds, with roughly a 30 second rest in between.

I get it, and trust me, we do plenty of alactic and aerobic work in our initial training blocks.

But glycolytic work gets them prepared for when things get messy.

When they step on the line and have to do that pre-season conditioning test.

When that coach decides that his athletes aren’t working hard enough and needs to “run” them.

Or when things get hectic in a game and they have to go and make a play.

Quite simply, lactic work preps your athletes for the randomness and chaos that accompanies sport.

The last thing I want to do is prepare my athletes based solely on what a time-motion analysis says, and fail to prepare them for what actually happens in a real life game or match.

Pro Tip: Take the last 2-3 weeks of your off-season programming to sprinkle in some lactic-based training.

It’s not going to kill them, and you’ll see profound changes in their ability to tolerate glycolytic work as a result.

This way when things get ugly in the pre-season or during a big match, they’ll be ready for it!

#6 – Putting the Pieces Together is the Hardest Part!

Last but not least, once you’ve got all the big rocks in place, it’s time to put it all on paper.

But here’s the bad news – this is the hardest part! I struggled mightily writing that first conditioning program.

After talking with Joel, he did as well.

You have to write that first program, and it won’t be perfect. Just get it on paper and move on.

Write the program, make notes with regards to the changes you see, and then tweak and refine.

There’s a simple mantra that I’ve been living by these days that applies here:

I’ve been working on writing better conditioning programs for 5 or 6 years now.

I’ve come a long, long way – but I still have a ton to learn.

Pro Tip: Get out of your own way!

Write the program, make some mistakes, and learn from it. The faster you fail, the faster you will see true success.

As I’ve mentioned above, I’ve made a ton of mistakes writing conditioning programs in the past.

However, each program I write gets me a bit closer to my end goal, which is to write world-class conditioning programs. 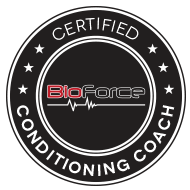 If you want to take your own conditioning programs to the next level, then please check out Joel Jamieson’s Certified Conditioning Coach Course.

Joel has provided you with a step-by-step and proven system to writing better programs, and he’s been instrumental in my development.

The course is only available this week, and if you don’t register it will be 6-12 months before the program opens back up.

P.S – In case you were wondering, KDawg never got to test her conditioning that summer, as she sprained an ankle in summer camp (long story here – buy me a beer next time we hang out and I’ll give you all the details).

However, after 2-3 weeks on our conditioning program, she was texting me that she was making hard runs in the 80th, 85th and even 90th minute of her matches.

For a girl that could only go 15-20 minutes a month earlier, I’d say this was a pretty good result!