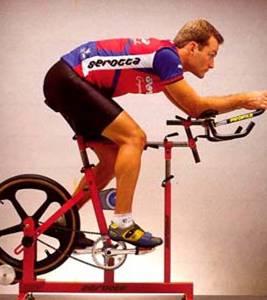 Note from MR: Mark Young is one of my favorite fitness guys.  He’s well-read, looks at everything with a critical eye, and perhaps most importantly, he’s willing to speak his mind.

I think you’re really going to enjoy the piece below.  Enjoy!

With all of the talk about interval training for fat loss in recent years it was only a matter of time before someone stumbled across the 1996 study by Dr. Izumi Tabata and his colleagues.  In fact, this study created such a rage that now hundreds of thousands of trainees around the world now include “Tabatas” as part of their fat loss programming.

Unfortunately, there are two fatal mistakes made by those using these protocols and I hope to identify and dispel the myth of the Tabatas once and for all.

Despite the widespread use of this system, most people have absolutely no idea what the actual Tabata protocol is.  In the often cited (but rarely actually read) study, one group performed moderate intensity (70% VO2 Max) steady state cardiovascular exercise for one hour on 5 days per week.  This would be along the lines of what most people would be accustomed to doing in the gym.

The other group used the Tabata protocol which consisted of a 10 minute steady state warm up followed by 7-8 sets of 20 seconds at 170% VO2 Max on a mechanically braked cycle ergometer.  Subjects were given 10 seconds of rest between each set.

One more interesting part?  On 4 days of the week the Tabata group performed this exact protocol.  On the fifth day they actually did 30 minutes of steady state exercise at 70% VO2 Max followed by 4 Tabata style intervals.

So over the course of a week the Tabata group also did a total of 70 minutes of steady state exercise as well!

But here is where most people mess up.  VO2 Max is determined (in this case) by having the person ride the ergometer while measuring their oxygen uptake and gradually increasing the wattage until the person’s oxygen uptake no longer continues to rise.  This is considered 100% of their VO2 Max and it is often associated with complete exhaustion and/or vomiting.

Now imagine increasing the resistance on the bicycle to increase the wattage to 170% of that value.  That is the intensity required for a true Tabata interval.  Each interval is completed with maximal effort.

Despite what you’ve been told, front squats, resistance bands, or any other bodyweight routine you might be doing may replicate the time sequence of the Tabata protocol, but it is NOT a Tabata interval.  If your first set is performed at a submaximal weight that becomes maximal by the final set this does not even come close.  It might be hard, but it isn’t a Tabata.

Mistake #2: Tabatas have not been shown to be more effective for fat loss than any other type of circuit training.

In fact, the Tabata protocol has not even been tested for fat loss at all.  In neither of the studies done on this protocol was fat loss even measured.  This protocol was created for performance, and the primary outcome measures were predominantly looking at aerobic and anaerobic fitness.  Someone simply took these studies to mean something that they didn’t say.

Is it possible that the Tabata protocol is better than other fat loss protocols?  Sure.

Is it possible that it is equally effective?  Of course.

But with those two possibilities comes the other possibility that the Tabata protocol is not as effective as any other protocol whether it is circuit training or steady state exercise.  And that would be assuming that you are indeed performing the Tabata protocol as it was originally described which most people certainly aren’t.

In the end, if you’re looking for something different to throw into your routine go ahead and do a 20 second interval with 10 seconds rest, but DON’T call it a Tabata because it isn’t.

And don’t put all your eggs in one basket.  Make sure you include other types of metabolic work as well.  Even the authors did that.

Mark Young is an exercise and nutrition consultant from Hamilton, Ontario, Canada.  You can check out his website and subscribe to his newsletter at www.markyoungtrainingsystems.com