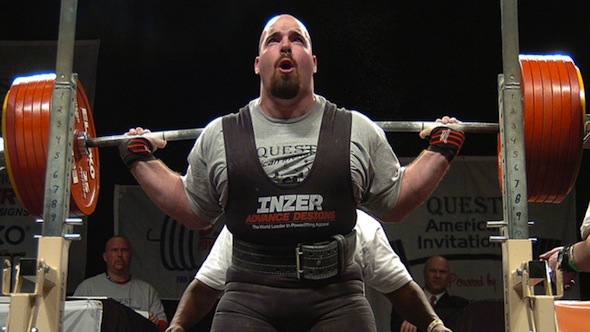 A few weeks back, I wrote an article for T-Nation titled 7 Reasons Everyone Should Doing a Powerlifting Meet.

It got great reviews, and almost all of the commentary and feedback was awesome. And hopefully I inspired a few people to do a meet in the process.

However, one guys’ comments stood out – essentially, he said that as a young guy with a business, and more importantly, a family, I should hang it up and forget about competing.

There’s a valid point there, and I respect his opinion, but it also got me thinking:

Why exactly did I feel the urge to compete again?

And herein lies that answer. Enjoy!

#1 – I Needed an Athletic Goal

My last powerlifting meet (prior to the one in October), was in April of 2005.

Following that time, quite a bit has happened:

So basically, a lot has changed in the last 6 years.

Up until 2005, however, I had always trained for something.

Since then, with all of the other stuff going on, I hadn’t really had a goal other than to stay in reasonably respectable shape, maintain at least some of my strength, etc.

So in going to back to powerlifting, I immediately had an athletic goal, or target, to shoot for.

Perhaps more importantly, I had a deadline – on X date, I needed to be ready to rock.

So beyond the goal, there was a sense of urgency to put everything into my training, versus going through the motions.

As I mention almost daily, I’m very goal-oriented and goal-focused.

When I left the sport in 2005, there were still goals hanging over my head that I hadn’t achieved.

The issue was, from mid-2005 until last year, I just hadn’t had the time to dedicate to my own training.

Those of you with businesses, with a family, or both, know and understand that there are times in your life when you have to shift your focus.

Quite simply, you’re not the most important thing in your own life – at least not for the time being.

So once things started to settle in, I realized that I wasn’t getting any younger, and if that I was going to achieve those initial goals I had set for myself, now was probably the best time to do so.

So this was the ideal time – between my family/personal life, my professional life, and my “career” (if you can call it that) as an athlete, now was the best time to make that push.

Beyond everything else, this was the one that stuck in my mind the most. I like to call this the 80-year old test.

Bottom line – when I’m 80 years old, decrepit, senile, talking about my glory days, would I be able to say I gave everything I had?

That I gave every ounce of my being to my sport, and I achieved what I wanted to?

But I’d like to think I learned some things over the past 6 years.

I’d like to think I learned more about technique, and how I can adapt my technique to my own body to get more out of it.

I’d like to think all that “corrective” stuff we do could pay dividends – not only in improving my performance but also by keeping me healthier and allowing me to train harder, even at my “advanced” age.

And in the end, all I can say is that I know I have a little bit left in me.

Knowing this is probably my last go-round has lit a fire under my butt (and in my belly) that I didn’t’ know was there before.

So yeah, I’m going to do this one more time – for a few more years.

I want to see what I can accomplish, what my body can do, when I push it to the limits.

As the saying goes, “You don’t know what you’re capable of until you push your limits.”

So that’s why I got back into powerlifting.

It’s not so much hitting specific numbers as it is the discipline, going through the mental and physical grind, and seeing what I’m made of, that excites me the most.

Even if you never compete in an iron sport, hopefully this post motivates you just a little bit to think about your goals, what you want to accomplish, and to take action on them as soon as possible.