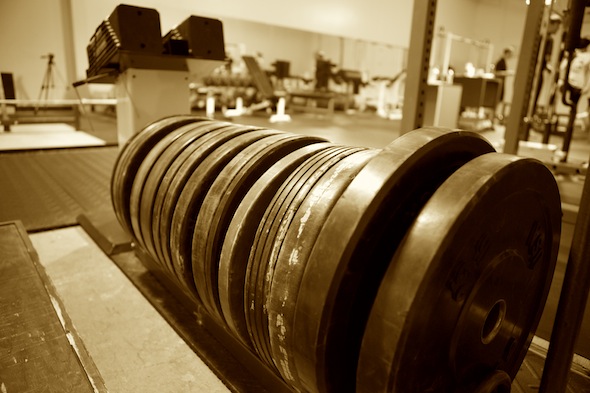 Staying true to my theme from Monday’s post, today I want to talk about the long-term development of young athletes.

Last night for part of my continuing education time, I was brushing up on som materials by the Russian powerlifting coach Boris Sheiko.

If you don’t know anything about Sheiko – Google the man.

He’s produced numerous world champions, and he epitomizes the volume-based approach of many Eastern Bloc powerlifters.

So now I’m sure you’re wondering:

What can a world-class powerlifting coach teach us about training our young athletes?

In his book (which you can find parts of for free on Elite Fitness Systems), Sheiko points out several critical components of his training for young athletes.

Here they are, in no particular order.

#1 – Use Box Squats to Teach the Squat

Sheiko notes that teaching young athletes to squat effectively can be challenging, as there are a lot of moving parts.

Two of the big ones are focusing on locking in the back, while also keeping the knees in the right spot.

His solution is to use the box squat instead of a free squat initially.

This has long been a tool in my training arsenal as well. I quickly realized that most athletes don’t have the posterior chain strength to initiate the movement by sitting back, so giving them a box allowed them to learn this pattern much quicker.

Another great option is the goblet squat. Although the pattern isn’t as hip dominant, it will still teach a great looking squat, and give you a great movement pattern to build from in the future.

#2 – Use Rack Pulls to Teach the Deadlift

Rather than focusing on the rack pull exercise, just think about the concept here.

We know that many athletes either:

A – Don’t have the posterior chain strength to push back and load the hips/hammies, or

B – Don’t have the mobility to get into a proper deadlifting position initially.

Instead of having them deadlift with crappy form Day 1, I’d rather find a happy medium that allows them to groove optimal technique right from the start.

Since we don’t train powerlifters exclusively at IFAST, some of our favorite variations are either trap bar deadlifts, or kettlebell deadlifts off a box. Both allow us to minimize range of motion initially, while still training the hip hinge pattern.

This can’t be harped on enough:

Young athletes (especially males) will always put more weight on the bar than they could/should!

Whether it’s ego, stupidity, or some special blend of the two, if you’ve ever worked in a high school or college weight room, you know this is the case.

If you work with athletes in these age brackets, it’s imperative that you let them know you don’t care about load early-on.

In fact, I’d rather them hold themselves back a bit until their form, technique and confidence are rock-solid.

Make sure they get all their reps, groove their technique, and build a base.

Then, and only then, will we start to push the load a bit.

This goes hand-in-hand with the previous points.

You have 18-year-old, all-world linebacker Johnny Rocket squatting 405 for reps in one rack.

Down the way, Tiny Tim (who only made the team because his dad is the high school principal) can barely squat 135 without his back rounding and knees damn-near touching each other.

When Tiny Tim sees Johnny Rocket, his natural intuition is to load the bar up and do more than he’s really capable of.

And we all know what happens then…

…his technique gets worse, his squats end up higher and higher, and eventually, he’s not doing anything remotely resembling a squat!

By keeping kids of similar age brackets together, you can stop some of this from happening.

Now this may not always be feasible in a high-school weight room, but at least keep it in mind.

A more practical solution may be to only pair athletes up who are of similar age/development.

Sheiko is big on having his young athletes lift in “meets.” But when he uses the term “meet,” he isn’t talking about going to a venue and lifting max efforts in front of a crowd.

Instead, his meets are held in the gym and are focused solely on executing the lifts with proper technique.

I damn near shed a single-tear reading this one – it reminded me of my good friend and Olympic lifting coach Grant “Rufus” Gardis, who has done this exact thing with his young Oly lifters.

Remember, the goal early on isn’t to test strength – it’s to teach proper movement and technique.

Once technique is solid, then loads can be progressively increased.

While my goal was to pick up some new powerlifting tips and tricks from my reading (which I did), I was pleasantly surprised to get such great information on training young athletes/weight lifters as well.

And hopefully I didn’t butcher or misrepresent any of Sheiko’s work – sometimes those Russian-to-English translations aren’t 100% clear!

If you train young athletes, the International Youth Conditioning Association (IYCA) has opened the doors for it’s annual conference this March. I’ll be speaking on the topic of program design, and I’d love to catch up with you if you’re around.

You can find all the information about the IYCA at their website: