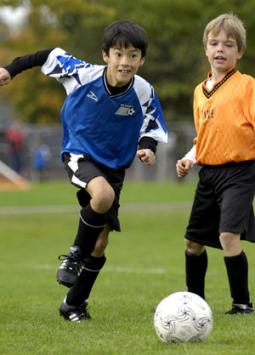 (Note from MR: Brian Grasso is not only a great coach and speaker, but someone I consider a great friend as well.  His passion for helping kids is second-to-none, and he’s someone I will have guest blogging for RTS on a continuing basis.

Other than possibly Eric Cressey or Bill Hartman, I can’t think of anyone who consistently examines life, and training, as similarly to myself as Brian does.)

The Youth Fitness and Sports Training explosion has happened.

More than $4 billion are pumped into the niches of personalized training and coaching for young people every year in the United States alone (Wall Street Journal, November 2004) and roughly 1 million kids and teens hired a Personal Trainer in 2006 (msnbc.com).

Given those stats and the enormity of both the problems (youth obesity and sports-related injuries) as well as the market size (see above) you’d think that we, as a profession, would have a relatively good working knowledge of how young people need to be trained and guided through a physical education process.

Unfortunately, this is as far from the truth as it gets.

I won’t bloviate or preach.

I won’t reveal my thoughts regarding how ineffectual we choose to be when working with this demographic.

And I certainly won’t use any sardonic overtones about the role of responsibility we should employ when opting to work with such a sensitive and cherished client base.

I will simply appeal to your sense of logic and intelligence.

For the purposes of this article, let me say this:

“Kids” is a term I will use to encompass everyone who inhabits the ages of 6 – 18.

Miniature superstars, bench-warmers and the overweight, will all be lumped under the same umbrella.

And simply stated, I do this because the development parameters of physical stimulus needed for ALL ‘kids’ is the same – at very least in the beginning phases of training spectrum.

Training stimulus with this demographic is guided, primarily, by physiology.

Instead, your focus must be on the organism itself.

What a young organism needs to experience in the way of physical stimulus can largely be deduced by chronological age.  Certainly biological age (relative body maturation), emotional age (psychological maturation) and even personality (temperament) can all be factored into the equation, but I have found in my 13 year career that chronological age determents can be successfully applied in 90% of the cases – the remaining 10% can be accounted for through proper coaching and identification.

Having said all that, the following is a brief rundown of the physical needs of ‘kids’ based on chronological age:

* Guided Discovery – implying that Coaches and Trainers must create games and exercises that involve a variety of movement and guidelines in terms of execution, but allow the ‘kids’ to explore on their own.  This phase is terribly critical for establishing ‘Athletic Intelligence’ and sets the seeds for increased complexity of training in the future

*  Outcome-Based Coaching – Coaches and Trainers must restrict their commentary and praise to that of ‘outcome’ oriented verbiage.  For example, when asking a 7 year old to pick up a medicine ball and throw it forward using a chest-pass motion, provide praise on that and that alone with respect to successful execution.  Comments pertaining to form are not required and can impede the natural development of ‘kids’ with respect to establishing ‘Athletic Intelligence’.

*  Learning Exploration – Not dissimilar to Guided Discovery, ‘kids’ must still be encouraged to discover what proper execution feels like on their own.  However, as emotional maturation increases (and while neural plasticity or adaptability is still high) it is also critical to start teaching the essence of primal patterns.  Educating ‘kids’ on how to produce and resist force, create angles or accelerate/decelerate becomes an increasingly important part of the training process.

This is a rough overview.  I admit it.

But learning exactly how to work with ‘kids’ in a training environment is a process of education unto itself.

Just know this for starters:

It’s not about Sets & Reps – it’s about instructing technique through a developmental process.

There’s more, MUCH more I need to cover… And fortunately will be able to.

Next month I’ll be back with another installment.

Until then,  re-read the above.

The ‘kids’ are worth our best effort.

Brian Grasso has trained more than 15,000 young athletes worldwide over the past decade.  He is the Founder and CEO of the International Youth Conditioning Association – the only youth-based certification organization in the entire industry.  For more information, visit www.IYCA.org