Note from MR: As many of you know, I’ve spent a ton of time the past couple of years learning about speed.

As you can imagine, this is a massive topic – and one I’ve really only scratched the surface on.

However, one of the more complete manuals I’ve come across is Travis Hansen’s “Speed Encyclopedia.” It’s a really solid resource, and one that I learned quite a bit from.

Today is a guest post from Travis, and one that I sincerely hope you’ll enjoy! – MR

It’s really no secret at this point that outside of possessing higher power output throughout the entire body in both the vertical and horizontal direction, being able to effectively exhibit that power through proper technique will be critical to athletic success!

In this guest post I’m going to either introduce or review, and then elaborate on 3 specific cues that you can implement with your athletes immediately to help make them faster.

This technique applies after the athlete has exited the start where body lean, increased knee bend, and the early acceleration phase have finished.

After 10 yards up until the athlete reaches top speed (30-40 yards+), he or she needs to have the stance or landing leg to be locked and rigid. 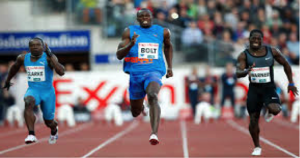 Notice the sprinter on the right and how stiff his landing leg is which allows for greater speed potential.

Often times, you will notice that many athletes will “collapse” the knee which creates an inevitable state of deceleration and energy loss.

Lower body weakness, inexperience, and lack of kinesthetic or movement awareness are probable causes of this technical deficiency that should be addressed right away.

This technique refers to the manner in which the muscles on the front of the shoulder swing the arm forward as we sprint.

You will still notice many coaches, trainers, and even parents making a strong case for “tucking” the elbows and maintaining a strict linear arm drive while sprinting.

This is simply wrong.

After watching literally thousands upon thousands of sprints and considering local anatomy, I think this cue is wrong and very unnatural for the athlete.

To help illustrate my point, just look at strength potential and force output in a conventional bench press versus a close grip press. Obviously, the former is a stronger and more powerful variation of upper body motion.

I think this fact helps explain in part why athletes exhibit some degree of a “partial crossing” pattern with their arms during sprinting. 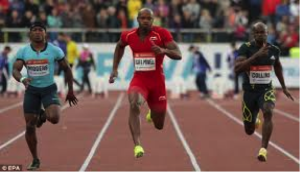 In the picture on the right, notice the elbows flare out on the back-swing and then come forward and across as the arm drives forward. This helps feed more energy forward in the intended direction.

Moreover, I’ve wondered if the arm swinging forward and across the torso like shown above, might help to activate the entire latissmus dorsi more, which might further activate the Posterior Oblique Sub-System, and enhance leg drive into the ground??

As the arm swings forward it also horizontally adducts in the transverse plane of motion. The lat is one of the muscle groups performing this muscle action based on its attachment at the shoulder.

At the same time, the other half of the lat is driving the arm back into extension and is linked through a force couple with the gluteus maximus of the stance leg.

Having the lat work at two ends is better than one and may feed the glute to contract more since their actions are synergistic in the sprint pattern.

If nothing else, utilizing stronger muscle groups to swing the arm forward through the partial cross is definitely reason enough to encourage this technique.

This principle of speed can be applied with Assisted Sprints (slopes or bands), ladders, slideboards, or simply with traditional sprinting.

If athletes aren’t attempting to push past their current level of speed output then not only does the body have no reason to move faster, but science has shown that the body has established a form of “governor” that regulates speed in the central nervous system.

The only way to re-adjust that governor would be to try and push past it, so that speed can be reset a little bit higher.

Once a new speed has been set, then the cycle repeats and it is this accumulation of small and consistent changes that causes times to drop over the long-term.

It all starts with the Overspeed Principle though. Frequent, long, and slow distance running isn’t going to warrant any change.

Managing overspeed also depends on experience level and the skill of the athlete. As athletes become faster, careful manipulation of their speed program needs to be taken into consideration and overspeed can eventually be counterproductive.

For now though, you should just look at and consider overspeed training as a basic principle that is still missing in many athletic and speed development programs.

Travis Hansen has been involved in the field of Human Performance Enhancement for nearly a decade. He graduated with a Bachelor’s degree in Fitness and Wellness, and holds 3 different training certifications from the ISSA, NASM, and NCSF. 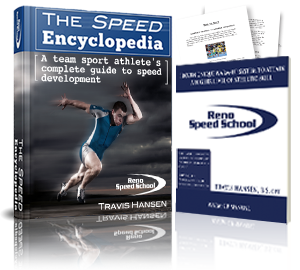 Travis was the Head Strength and Conditioning Coach for the Reno Bighorns of the NBADL for their 2010 season, and he is currently the Director of The Reno Speed School inside the South Reno Athletic Club.

He has worked with hundreds of athletes from almost all sports, ranging from the youth to professional ranks. He is the author of the hot selling “Speed Encyclopedia”, performance writer, and is also the leading authority on speed development through the International Sports Sciences Association.