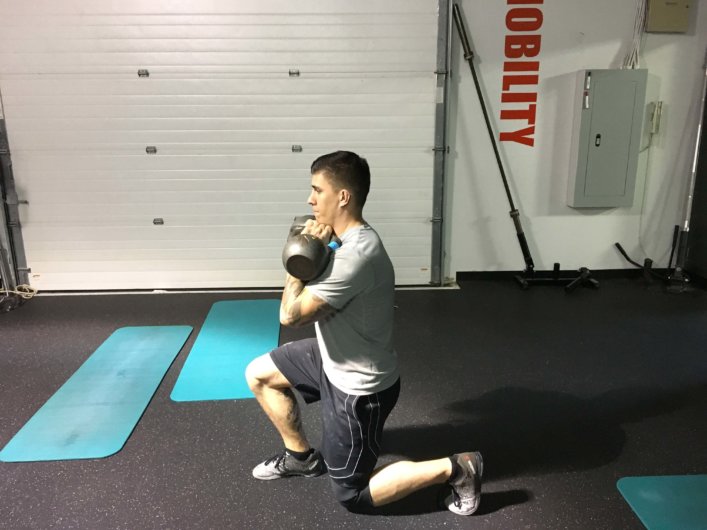 As trainers and coaches, we love to classify our exercises.

We have our quad dominant and hip dominant lifts.

We have horizontal and vertical pressing and pulling.

And of course, we’ve got elbow flexion and extension, because we have to find a way to make arm training sound sophisticated, right?

But when it comes to unilateral training, the water gets muddy.

For some reason, it feels like unilateral exercises are far more difficult to classify than they should be.

Case and point – many trainers and coaches will often refer to a split-squat or step-up as a single-leg exercise.

But is that really the case?

Today, my goal is to give you two very simple questions you can ask to determine what type of unilateral exercise you’re doing, and by extension, just how challenging and complex that exercise really is.

But first, in the interest of being thorough and complete…

In the title of this article, I use the term “unilateral.” Now keep in mind, a truly unilateral (meaning ONE or SINGLE) leg exercise would only include single-leg squats, RDL’s, and their derivatives.

So in the interest of being thorough and complete, let me say this:

I understand that the term unilateral is not 100% correct. But it’s far easier (and more concise) than typing out “split-stance and single-leg exercise” every single time I want to refer to these types of exercises.

Now that I’ve got that out of the way, let’s talk about our questions.

Two SIMPLE Questions You Need to Ask Yourself…

In Mike Young’s podcast on plyometrics, he gives you four simple questions you can ask yourself to determine the intensity level of a plyometric exercise.

And this really resonated with me, because he didn’t just give us the answer.

Instead, he gave us a filter that we can pass any plyometric through to determine it’s intensity level.

My goal was to create something similar for unilateral exercises, and I came up with two questions:

So with that being said, let’s answer those questions and see where we end up!

This is what we call a “split-stance” exercise, and it’s the starting point for our unilateral progression.

In a split-stance exercise, the feet are offset front-to-back relative to the body (more on this below).

And when we move from a parallel stance to a split-stance, that reduces our based of support.

But this part is critical:

With both feet on the ground throughout the exercise, we not only have a constant feedback loop, but a constant external stabilization strategy as well.

Exercises that would fall into this grouping would include:

Now keep in mind, there are exceptions to this example.

For example in a lateral split-squat, the feet are both on the ground at the same time. However, they are also placed in a wide, parallel stance.

So it’s not perfect, but it’s a start!

This is what I call a “pseudo single-leg” exercise.

And to make this clear, let’s start with examples first.

In a lunge, you start in a parallel stance, and then assume a single-leg stance while moving the “swing” leg forward or backward.

In a step-up, you move from a parallel stance to a single-leg stance. But at the midpoint, you can rest both feet on the box to gather yourself.

As you can see, these aren’t true single-leg exercises, as both feet are in contact with the ground at the midpoint.

But at the same time, they’re vastly more challenging than split-stance exercises, because we have those transition periods where only one foot is in contact, and we’re in true single-leg stance/support.

This is why I call these exercises pseudo single-leg exercises.

They are, quite literally, the bridge from split-stance to true single-leg.

And as you can see from the examples above, lunging and step-up progressions fit nicely into this area.

Now that we’ve covered this, let’s talk about the final unilateral progression.

If you are in single-leg stance/support for the duration of the lift, this is what I call a true “single-leg” exercise.

These are by far the most challenging and complex exercises we can perform from a stability perspective, as our base of support is quite narrow.

This puts a premium on internal stability and control, and forces us to control our bodies in all three planes of movement.

Now keep in mind, this is also why I say one foot is off the ground “during execution of the lift.”

If you’ve ever performed a single-leg squat or single-leg RDL before, you know that keeping your balance can be quite a chore.

At the top of the movement, if you have to touch the ground to regain your balance and control, by all means, do that.

First and foremost, I hope this articles helps clarify – and classify – what split-stance, pseudo single-leg, and single-leg exercises are.

But perhaps more importantly, I hope I’ve given you a filter that you can use to help determine the complexity of any new unilateral exercise you want to add to you arsenal.

And if you want to learn more about unilateral training, from programming, to coaching, to progressions and regressions, then you’ll definitely want to check my Complete Single-Leg Training product which will drop in a few weeks.

This is my complete system for unilateral training, and I promise it will streamline everything you do.

Until then, have a great day and best of luck with your training and coaching!