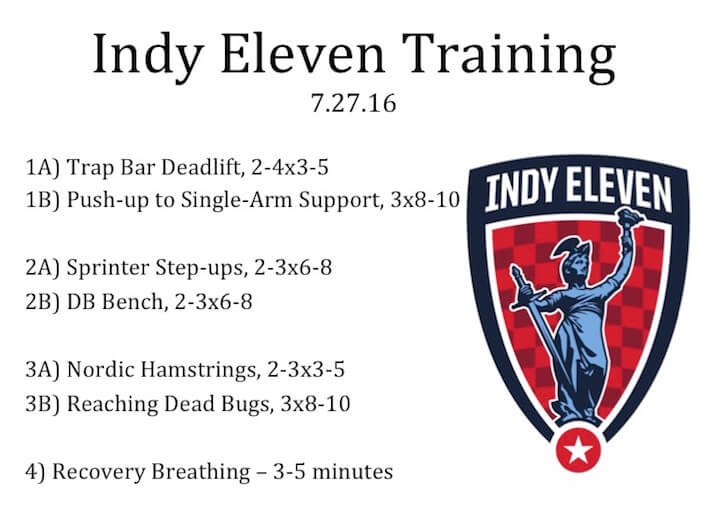 I’ve been doing this physical preparation thing for 16 years now, and it’s safe to say I’ve learned a thing or two along the way.

While I’ve always spent more time coaching athletes in their off-season, the past three years have provided a new challenge:

Keeping athletes fit, healthy and strong over the course of a competitive season!

(If you want an intro to my thoughts on in-season training, be sure to check out the following articles:

As well as my Managing the In-Season Athlete presentation from the EADS 2.0 DVD’s.)

I’m a big believer in constantly evolving and growing, which is why I’m writing this article today.

Quite simply, what am I doing different this year, versus in years past?

I’m a big believer in making changes when it’s warranted.

If there’s a need to change, then make changes.

If you’ve grown or evolved in your approach, then make changes.

In the league that I work in (the North American Soccer League, or NASL) there’s a lot of player movement and turnover year-to-year.

In fact, of the 20+ guys we have on our roster this year, only three of those guys have been with me since we started 2.5 years ago!

So there’s constant churn within the roster, but the schedule has changed as well.

The NASL added a new team to our league this year, which has increased the number of games played.

In soccer you typically play every Saturday, with a few Wednesday matches thrown in.

From a programming perspective, this makes things incredibly simple.

But as the number of teams expands, well, you don’t get more Saturdays!

This means that we play more Wednesday games, or as we call it, 3 in 8 (three matches in eight days – i.e., Saturday, Wednesday, Saturday).

As you can imagine, this puts a crunch on recovery, and forces you to better manage your athletes.

So with all that being said, here are the two biggest factors for the changes I’ve made this year.

We Have an Older Group of Athletes

The first issue is that this year (when compared to years past), we have an older group.

The benefit here is that technically and tactically, they’re more sound.

But on the flip side, recovery is always on our minds.

As such, my primary goal this year is to help the guys feel good week-in and week-out.

Now I could say without reservation that’s been my goal for the past two seasons as well, but it’s even more important this year.

My Role as an Athlete Manger and Facilitator

The second big change has been in how I view my role within the team.

When you’re working with athletes, you have to remember that your job is to prepare them for their sport.

As much as you might love it, the weight room is not their sport!

So here are a few thoughts on my role:

So that was a really long wind-up, to get to this:

My five big changes in my programming this year.

With an emphasis on recovery and making sure the guys are fresh, we’ve had to reduce the number of times we lift each week.

As you may recall, in Year 1 we lifted 1-2x/week. This was mainly because, as a staff, we were trying to figure out what worked best.

Last year, we had a dream scenario – I got the guys 2x/week. And it worked great for that group, as they were a bit younger and needed more time in the gym.

This year, however, with the increased frequency of matches and older age of our team, we’ve had to reduce frequency.

In all honesty, though, I feel in some ways it’s worked out quite well for us.

The guys are often very motivated to come in and train, knowing that they only have to make the trip to IFAST once per week.

(It’s a 30-minute drive from the pitch to the gym, so it’s not exactly convenient.)

Second, I don’t feel like we lose the quality of our sessions. We put a premium on a few key areas, get our work in, and get out.

The second big adjustment I’ve made this year is giving the guys more freedom in how they get the work done.

We’ve all written a program for an athlete where we have an idea of what we want to accomplish that day, only have to them walk in and be unprepared to train.

Quite simply, there are a lot of factors that play into whether an athlete is ready to train on a given day.

So while I’d love for a guy to do 3×[email protected]% this week, the fact of the matter is that might not happen!

With an older group, I’ve tried to give these guys more leeway.

If you’re feeling good, push it and get some quality work in.

If you’re feeling banged up, go a bit lighter and use the gym to work some of the kinks out.

It’s not a perfect approach, and definitely puts the responsibility squarely on the athlete.

However, I think Mladen Jovanovic would respect the fact that this is a very agile approach to programming.

Beyond the freedom of choosing their sets and reps, I’ve also given the guys more freedom with regards to exercise selection.

For example, I have an idea of what I want to accomplish out of each section of my workout.

My 2A is generally single-leg or split-stance work.

My 3A is generally a Nordic hamstring or similar eccentric-hamstring exercise.

But what if a guy just doesn’t feel like doing Nordics that day?

Or can’t fathom doing another split-squat?

That’s where I’m willing to give that guy more freedom to choose an exercise that works best for him.

I always tell my guys that if there’s an exercise they don’t want to do that day, or can’t physically perform, let me know and we’ll find an alternative.

The only thing I stress here is that I don’t want some totally new or unfamiliar exercise that will make them sore.

Otherwise, if it fits into the general theme of that portion of the workout, then go for it.

Another key emphasis for me this year is using the gym not only as a tool to develop strength or power, but to help the athletes move and feel better before they leave.

I’ll be honest here: No one cares how much you can trap bar deadlift on Wednesday if you move like shit on Saturday!

This will be an article in-and-of-itself in the future, but here are a few exercises and variations I’m using a lot these days:

Each one of these exercise branches or themes not only builds a more resilient athlete, but helps them feel better before they leave.

And speaking of feeling better before you leave, that brings me to my final point.

If you’re familiar with the R7 Approach to Training, you’ll know that the 7th R is “Recovery.”

In my world recovery is critical, and I’ve said numerous times it’s not how hard you can train, but how well you can recover that really matters.

Recovery is even more critical in-season versus the off-season.

When you work with a team, the sole goal is to have the team ready to play at a high-level, each and every week.

As such, the last thing I have my athletes do at the conclusion of every session is recovery breathing.

But unlike in years past where I had it written at the bottom of their sheet, now it’s written into the workout.

This way, the athlete knows that this isn’t just an afterthought – but something that we absolutely do as part of our training session.

So there you have it – five updates to my in-season training protocols.

Like most things in training, it’s always a work in progress.

However, for this group of athletes, and this competitive calendar, I’m very pleased with the results!