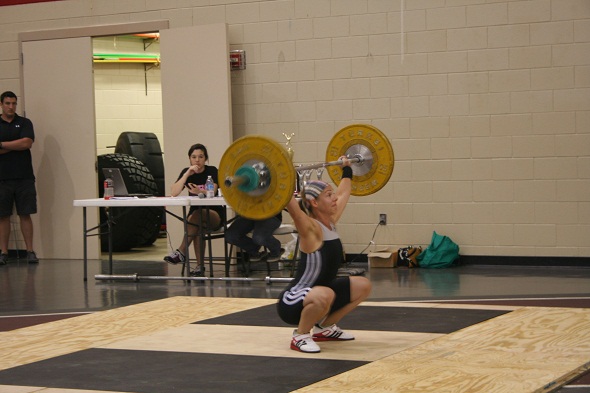 Mike’s note: I recently interviewed Dan, one of our key coaches at IFAST. I really enjoyed reading this guest post from Dan, and I hope you do, too!

Planting the Seed of Change

I’m known as an Oly-lifting guy, but this is not a post about weightlifting. Instead, it’s a post about how we can change the world through weightlifting, through exercise, and through coaching movement in general. But to make that point, let me start with a story about my awesome wife.

A little over a year ago, my wife was “getting her body back” from the birth of our lovely baby boy. Prior to her pregnancy, Natalie had begun Olympic weightlifting and after only a total of 9 months training was ranked in the top 25.

Her determination to get back into shape was sometimes my own personal hell. For those of you who are married and coach your wife, you probably know the frustrations of the coach-husband relationship (and for those of you are not, you can only imagine).

For women, post-partum hormones cause serious symptoms that, had it not been for the pregnancy, would clinically cause a woman to be diagnosed with multiple personality disorder (luckily, she didn’t have Hilary Duff’s issues).

Somewhere after the joy and excitement of a newborn subsides for a moment, a post-pregnancy Jekyll-and-Hyde hormone imbalance kicks in. To put it simply, my wife was now a combination of the possible bastard love-child of Mike Tyson and the Incredible Hulk. (Not post-prison Mike Tyson or the Bruce Banner version, either.)

Hormones aside, training after the birth of a child is difficult. My wife’s body was bigger than it ever had been, she now had milk-engorged breasts that had to be maneuvered around, and maintaining overall balance (let alone lifting technique) for her was damn-near impossible.

For someone who is as competitive as she, it is impossible to not get frustrated. When the frustration met the Tyson-Hulk hormones, I, like any good husband, was the recipient of all that joy. 🙂 (Love you, hunny!) 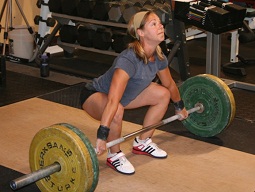 Somewhere in the middle of one of those weeks where my wife became enraged Dr. Banner, I put her in a room with a pen and pad of legal paper. I told her to write down every reason that she wanted to be an Olympic weightlifter.

Here are some of the highlights from her list:

This past week for me has been hell. I am knee-deep in starting a business, and nothing seems to be going smoothly. My week from hell consisted of the lows of starting a business: the uncertainty, the cost, and the stress of trying to do something different. However, in the middle of a week from business hell, I found the old list Natalie had written and stopped to contemplate it, and it completely re-energized me.

Natalie’s list reminded me why people get into the sport of Olympic weightlifting. There is much more to sport than just the winning. Sure, my wife had “being the best” on her list, but more to the point, the challenge of the sport leads to something more fulfilling.

Natalie gains much more from the 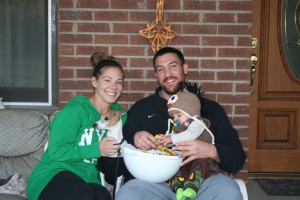 sport than just winning. She gains confidence, enthusiasm for sport and life in general, and the drive to show her son just what amazing things that human beings are capable of.

And maybe most importantly, the sport gives us something to bond over. Like Natalie says, a family that squats together stays together.

Sprouting Into a Purpose

Sure, at the end of the day, coaching weightlifting in the physical sense is nothing more than weight is being horked overhead. But when I coach, I feel there is something more to it, something deeper. I actually believe that when I teach someone to do something physical with their body, for themselves, I am making the world a better place.

For some, I can help them gain the independence and freedom to take their body and ability to places they want it to go. For some, I help provide an escape from being a cubicle-caged 9-to-5 humanoid. And for others, I’m helping them be a better role model for their kids.

At the end of the day, as a coach, I am making all of those things happen. Sure, I want more sales, web traffic and product sales, too. But every night, I go to bed knowing that I provide people with tools that help them change their lives.

I believe I am making a difference, and best of all, I get to share this experience with people who desperately need a change. I think if Natalie had asked me to make a list about why I wanted to start Force Barbell, it would have looked something like this:

Honestly, my brain works just that way. My number-one goal is to change the world, and of course all the time I hear how ridiculous that is.

People think it’s ridiculous because change is hard even if you’re the President, let alone if you’re trying to create global change through the platform of a fitness company. I’m sure my sister is rolling her eyes at this very moment reading and doubting this very thing because she has heard it at the dinner table before.

People like my sister inevitably ask, “How are you going to change the world?” I tell them: “With movement,” but I am not sure how it is going to work. And of course they laugh and say “No way,” and trust me, I see their viewpoint.

However, I say “bullshit”; if one man can inspire change, many can.

I Also Have A Dream

Think about this. Martin Luther King, Jr. was able to convince 200,000 people to join him on the Washington Monument, to hear a speech called “I Have a Dream.”

Now, hold it right there. The speech was not titled, “I have a solid plan” nor was it called “I can change the world in 5 easy steps,” or “I have it all figured out.” No, it was a speech with no clear-cut solution; he had nothing more than a thought of making the world a better place.

To make it more impressive, put yourself in late August in Washington DC. I am sure the temperature was somewhere in the 90’s with high humidity. And let’s not forget that in 1963 people were not running around in microfiber shirts and shorts; these people were wearing wool suits.

Think about that. 200,000 wool-suited people showed up in near-100-degree heat to hear a speech about a dream… and it sounds crazy to say it out loud. But guess what, MLK changed the world, and without a plan.

I get asked all the time, why do you want to coach? There is no money in it, and if there is money in it, the hours are horrible. “Dan, you could do so many other things, why?”

I tell them I plan on changing the world, and I mean it. I believe movement unites people. I am not 100% sure how it works, I just know it does. In team sports, you train, you eat, you suffer, and you move with your fellow teammates. And it is the unity of movement that makes individuals in sync, that makes them become a team.

In the military, you move, you train, and guess what, you go into battle and you are united through that movement, long before you get to the war. Why can’t we all move together and all unite?

Think about that, one giant training regimen that everyone does together, kings and peasants, skinheads and blacks, Israelis and Palestinians, Hatfields and McCoys, the Irish… and well, everyone.

Sure, people think I’m crazy, but I have a dream, that everyone will live light and lift heavy. So let’s all do this together, because one person’s crazy or dream will create unity in Changing the World through Movement.

Dan Brown is the creator of Force Barbell.

Force Barbell is dedicated to the pursuit of all athletic and physique goals. We believe that implementing coaching based on strong and sound scientific evidence, coupled with the ability to think outside the box, will greatly alter the physical culture of our country. More information can be found at www.forcebarbell.com.

Read Mike’s recent interview with Dan, and if you want to contact him, feel free to shoot him an email at