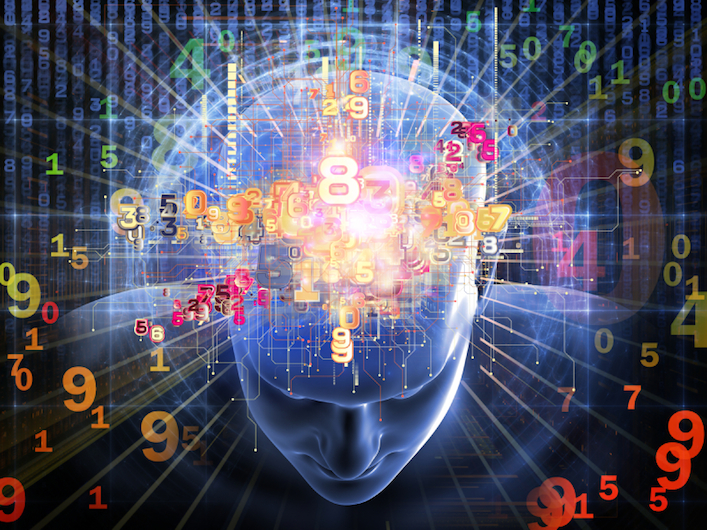 For higher level clients and athletes, however, it’s just not that simple.

Using ratings of perceived exertion, or RPE’s, is a critical component of my programming these days. In this article, I’m going to give a thorough understanding of RPE’s – what they are, why you should use them, and perhaps most importantly, how to use them effectively in your training.

The American College of Sports Medicine (ACSM), defines a rating of perceived exertion as:

“The RPE scale is a psychophysiological scale, meaning it calls on the mind and body to rate one’s perception of effort…The RPE scale measures feelings of effort, strain discomfort, and/or fatigue experienced during both aerobic and resistance training.”

If you want a more layman definition, an RPE is a subjective measure of how hard you feel like you’re working during a set, exercise, etc. 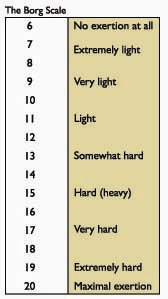 I remember first learning about RPE’s during my undergraduate exercise science studies at Ball State.

We were introduced to the Borg 20 point scale (shown at right). Even then, I thought it was ridiculous.

I don’t care if there is scientific evidence behind it, it’s not very practical.

As I continued on in my learning, Mel Siff often talked about RPE’s both in his Supertraining textbook, as well as his listserv group by the same name.

But it wasn’t until a few years ago when I came across Mike Tuscherer’s work where I found someone who seemed to not only have a grasp on RPE’s, but was using them effectively in training.

Now that you have a brief understanding of what an RPE is, let’s talk about why they could benefit your training.

Let me tell you about two squat workouts I had many moons ago. 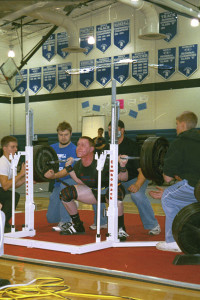 I was using my Modified 5×5 squat routine, and making consistent gains. As I’ve noted numerous times, this squat program took my squat from 407 to 530 in approximately two years.

But what was the worst training session of the whole cycle?

Where everything felt heavy on my back?

This illustrates a good point, and gives us a glimpse as to why RPE’s can be beneficial in our training.

What we’re talking about here is the difference between internal and external loading.

On the flip side, internal loading is how that bar weight feels. Here’s a different way to look at it.

Let’s say  225 is a respectably heavy weight on your bench press. Not max effort, but you’re not hitting it for 15 or 20 reps, either.

Some days, you can go in and crush that 225 like it’s nothing. And others, that 225 feels like a ton of bricks in your hands.

The bar weight (external loading) never changed. However, how that weights feels can vary wildly.

Why? There are tons of reasons for a higher internal load, or RPE:

This is where RPE’s can come into play. If you’re following a percentage based program like 5×5 or 5-3-1, if the cycle says to hit 5×5 at 225 that workout, that’s what you should do (although we all know there’s a gray area in everything).

Without RPE’s, you may be under-training on certain days when you could go heavier.

And on the flip side, you could be lifting too heavy on days when your body or mind aren’t prepared for it.

Quite simply, RPE’s allow you to customize each and every training session, to make sure you’re getting the most out of what your body can give you.

Now that you’ve got a basic idea of why you might want to use RPE’s, let’s talk about how you can start using them in your own coaching and training to maximize your results.

As I mentioned before, I really like Mike Tuscherer’s system, and the one I use is almost identical. For my RPE system, it looks something like this:

As I mentioned previously a 6-20 point scale is ridiculous, and most people are never, ever, ever going to use it.

A 1-10 scale works for almost everyone, as our brains have been taught to work in that fashion since we were youngsters.

Furthermore, for what we’re trying to do as strength athletes, using an intensity below a 7 or 8 just doesn’t do much for us outside of active recovery.

(Side note: I’ve dabbled with lower numbers for speed/power work, but I honestly feel that sort of training should be regulated using a velocity-based system such as PUSH strength, a tendo unit, etc.)

If you’re serious about incorporating RPE’s, it’s pretty darn simple – just start using them! Even if you don’t want to deviate from the program you’re currently following, just start jotting down an RPE number down next to each set in your training journal.

Doing this will allow you to see how you perform on any given day, and determine what factors lead to good or bad training days.

Now let’s look at the specifics of using RPE’s as an athlete, coach, and/or program designer.

Using RPE’s as a Coach

I’ve been using RPE’s as a coach extensively for the past three years now, and I feel like it really allows me to customize the training and loading of my athletes.

When you start asking athletes how they feel (versus calling weights for them), it immediately engages and empowers them in the process.

Most of my athletes love the fact that we’re working together to get the most out of each training session.

But, this can also be challenging at times.

I may not be comfortable with how someone’s technique looks, yet they feel the weight is easy.

This is where I may have to do a bit of coaching prior to the next set, while simultaneously holding them back a bit as far the loading goes.

When asking an athlete for feedback, I simply ask them: “How hard was that set, on a scale of 1-10?”

Based on a combination of their feedback, how hard I thought it looked, and the quality of their technique, we will work together to pick a weight for the next set.

Again, I can’t stress this highly enough – the second you start incorporating RPE’s and getting feedback from your clients and athletes, they are immediately more engaged and dialed into the process.

Using RPE’s as an Athlete

Looking back at old training journals from 2002-2005 when I was powerlifting, I always noted three things:

The most important factor when you start using RPE’s as an athlete is to make sure you’re honest with yourself.

This isn’t about how a weight should feel.

Or simply being a bad-ass ninja assassin, crushing your way through each and every workout.

The goal is to be honest with yourself. And for some people, that can be pretty darn challenging! As I mentioned above, if you’re using a percentage-based system, by all means keep doing that.

Using RPE’s to Design a Program

The final step is using RPE’s to dial up or scale back intensity over the course of a training cycle. For instance, here’s how a training cycle may look for the squat over 4 weeks:

As you can see, there’s a natural fluctuation to the loading, but you don’t have control over the intensity based on how you’re feeling. Here’s how that same cycle may look using RPE’s:

“But Mike – those look exactly the same!”

And while they look similar at first blush, the big difference is having the ability to increase or decrease the intensity based on how you feel.

Working in this fashion,  you can still wave intensity much like a percentage based system, but you have the built-in ability and freedom to changes things on the fly, based on how you’re feeling.

At some point in time, your newbie gains are long gone and the systematic, linear approach you used to build an appreciable level of strength just won’t cut it any longer.

When you delve into this brave new world of intermediate and high level training, you’ve got to arm yourself with tools to help you step up your training game.

RPE’s are a fantastic weight to customize and dial-in your training on a day-to-day basis. Give them a shot next time you’re in the gym, and let me know how it works out for you!

PS – If you’d like to learn more about how I design programs, check out my all new “Insider Secrets to Program Design” series. With over two hours of content, you can pick up your copy today for only $29.95!