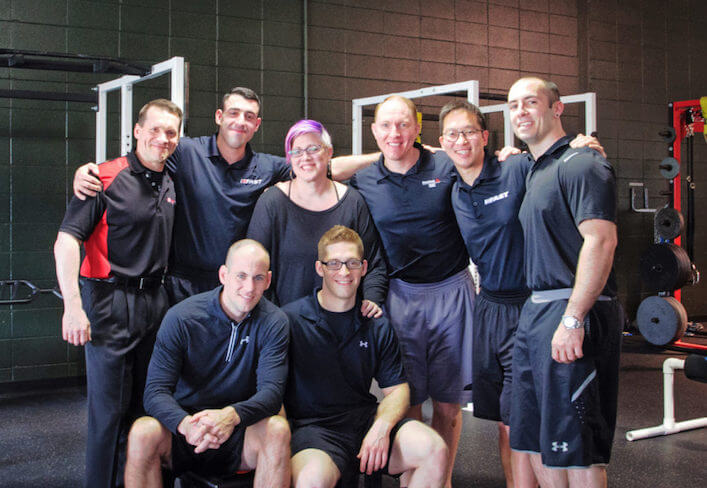 In the summer of 2000, my life changed forever.

I thought I wanted to do something in fitness, and the thought of being a personal trainer or strength coach sounded pretty darn cool.

Problem was, I’d coached/trained less than 10 people in my entire life!

(I had, however, become an absolute ninja assassin in the formal arts of taking body comps with skin calipers, and taking blood pressures while people rode an exercise bike, however.)

So the other day I was thinking back to the start of that internship, and reflecting on things I wished I’d known back then.

The list below include five things I wish someone would’ve told me when I got started in the world of coaching.

Would it have made the path easier? No.

Would it have made it more direct? Possibly.

But most importantly, I think it would’ve given me some perspective on the journey that laid ahead of me.

Anyone who works in the field of strength and conditioning or personal training knows one simple fact:

This sh*t is hard damn work.

For me, hard work was instilled at a young age. My mom was an entrepreneur, so she had to grind it out to make ends meet as a business owner.

And my dad worked during the day as a professor at Ball State, only to come home in the evenings or on the weekends to random jobs and tasks all over the farm.

In the early phases of your career, you’ll probably work long hours.

Whether it’s in an internship or your first job, if you’re working less than 10 hours at a clip, be thankful.

My internship was somewhat unique because I worked in the summer (with limited hours in the training hall), but I can think of at least three times in my life when my schedule was absolutely crazy:

So early-on, you work long hours. That’s just kind of how it works.

And as you get older/wiser/better, I think you may work fewer hours, but those hours become more mentally fatigued.

The same principle applies to coaching – the more you know, and the more dialed in you are during your sessions, the more fatigued you are when you are done.

But here’s a little known secret to all this…

I don’t know about you, but there are many days when I’ve coached a full shift and yes, I’m mentally tired from coaching, but I’m also invigorated by all the great work that was accomplished that day.

The bottom line is this: Coaching is hard work.

But in no way, shape or form does that make it unpleasant.

So here’s something that, admittedly, took me far too long to figure out on my own (and hopefully I keep YOU from making the same mistake!).

Just because something is written on the program DOES NOT mean it has to be done!

And while that’s all fine and dandy, when you write a program, right wrong or indifferent you’re writing it as though the human being who will execute it will respond predictably like a robot or machine.

In all honesty, our best programs are really good educated guesses.

I say this because you can’t determine what’s going on in their life outside of the gym, how their body will respond to the training, or any of the numerous factors that influence how clients and athletes respond to any program.

To give you a couple of more specific examples, consider the following:

But consider two athletes, both of which are supposed to lift that heavy set of five:

Athlete A: Slept 8 hours the night before, training has been going great, and has no external life stressors to speak of at the moment.

Athlete B: Slept 3 hours the night before because he was “up in the club,” training has been suspect at best, he’s flat broke, his dog died, and his girlfriend just left him.

Who do you think is going to hit a PR that day?

This is obviously an exaggeration, but hopefully it proves my point.

Another example is putting the wrong, or inappropriate, exercises into a program.

I’d like to think I do this less and less now, but let’s be honest – we’ve all had a client who we’ve pushed too fast, too soon with regards to their exercise selection.

After all, not everyone can do a reverse lunge to overhead press on Day 1!

My philosophy at this point is to underestimate them a bit, and if they progress quickly, then to use that as a way to build not only confidence, but rapport as well.

Psychologically, it’s a huge difference to an athlete to be progressing rapidly, than to be told that they’re not good enough and that we need to take them back and regress them a bit.

Last but not least, if I’m being honest and transparent here (which I always try to be!), then one thing I can still get better at is progressing clients at their own pace.

I’m blessed to work with some of the best athletes in the world. And if you’re an adult and you get paid to play sports for a living, you’re probably a pretty good athlete!

So with that being said, yes, you may need to regress someone for a short period of time while you rebuild their mobility, stability or strength.

But that doesn’t mean you have to take 4-6 weeks to get them to the next level or exercise!

If someone is crushing it a week or two in, progress them then and there. Not only will it keep the training fresh and exciting, but they’ll love the fact that you’re challenging them as well.

#3 – You Can’t Swap Knowledge for Experience

And no it’s not because we’re  all a bunch of uncaring mentors who don’t want to see them get better.

Instead, it’s due to the simple fact that they are going through the Four Stages of Competence.

In case you’re unfamiliar, the four stages are:

When they come in, life is hunky dory and bliss-like because they don’t know anything about training or coaching.

But once they get in here and start learning a bit, well, now things are totally different!

It generally takes 6-8 weeks, but eventually they move into the worst part of the conscious incompetence phase.

In other words, they know that they are incompetent at their job, or not performing at a high level, but they struggle to do much about it!

On the contrary, they’re doing everything in their power to get there.

But here’s the thing: As I wrote several years ago, you can’t trade knowledge for experience.

I don’t care how many books you read, videos you watch, and seminars you attend, at the end of the day you have to be in the gym coaching people for a really long time to become a great coach.

Looking back, I can clearly remember going through this phase myself in my own internship.

I was surrounded by a staff that had, individually, been coaching for multiple years. And furthermore, I was the only intern when I got started, so I felt like I was on an island.

So needless to say, I did everything in my power to get better.

I read everything I could get my hands on.

And I asked questions incessantly.

But when it comes to the world of coaching, there’s simply no amount of knowledge that can replace your time in the trenches working with real, live human beings.

Now just to be clear: This is NOT a license to go in the opposite direction, either.

The coach who relives the same year 25 times because he never grows intellectually is every bit as bad as the keyboard expert who has read every book on training, yet has never coaches a serious athlete or lifter in his or her career.

Taking in and learning new information grows easier by the day, especially with the influence of the Internet and the globalization of information.

But developing a keen coaching eye and getting really good on the floor?

Well, that’s going to take a bit of time.

The next two points are similar, yet distinct enough I wanted to tease them apart.

When it comes to coaching, we often look internally first.

We want to better ourselves, and as a result we go out and learn more about program design and the best coaching cues to use.

In effect, we assume that it’s all about us and what we’re doing to help our athletes.

I was guilty of this early-on as well. I thought if I could learn as much as possible about strength, power, flexibility, or whatever, that I would be able to best serve my people.

And while that’s definitely not wrong, it’s clearly not the only thing that’s important.

At the end of the day, real, live people work your program.

How do you relate to them?

How do you connect with them?

How to you motivate them, empathize with them, and help them understand what they are capable of?

So while I was entirely consumed with continuing education early-on, I also got lucky.

I’m a naturally empathetic person, and someone that truly cares about others and is willing to listen to them.

So even though I didn’t realize it at the time, I was making deep connections with my clients and athletes that allowed me to be successful.

In fact, when I look back at my time in a rehab setting, I’m pretty sure that the only reason I was successful was because of my personality and my caring of people.

Because let me tell you this – it definitely wasn’t the programs I was writing!

As we discussed in the point above, I’ll never tell you not to get better technically as a trainer or coach. That will absolutely help.

But at the end of the day, PEOPLE work your program. Don’t ever forget that.

A few years ago I had this very powerful realization.

And not to say that I didn’t know this before, but it not only crystallized for me, but I also found inner peace with it as well:

My life is here to help others. More specifically:

As a coach, it’s about using your life to help others lift theirs up.

If you’re in this field to blow up your own ego and talk about how awesome you are, please save that shit for someone who cares.

I promise you this: A real coach knows very quickly who’s legit and who’s not.

They know who is in it for themselves, and who is in it to help their clients and athletes achieve their personal bests.

Now don’t get me wrong – every great coach has an ego, they take pride in their work, and they know they’re worth their salt.

But there’s a huge difference between knowing your worth and beating your own personal drum every chance you get.

What’s almost important to note here is that while there is an altruistic element to all this, you’re not some helpless schlep who has no control over his or her own life, either.

You serve because you enjoy it.

Because it invigorates you.

And because you love the feeling of helping someone else achieve their goals.

In my opinion, coaching is one of the most powerful jobs you can have (and yes, I’m admittedly biased here).

Each and every day, you can positively impact the people you coach and train, and help them make their lives just a little bit better.

I hope you realize just how important you are as a trainer and coach, and you’re ready to go out there and make a difference.