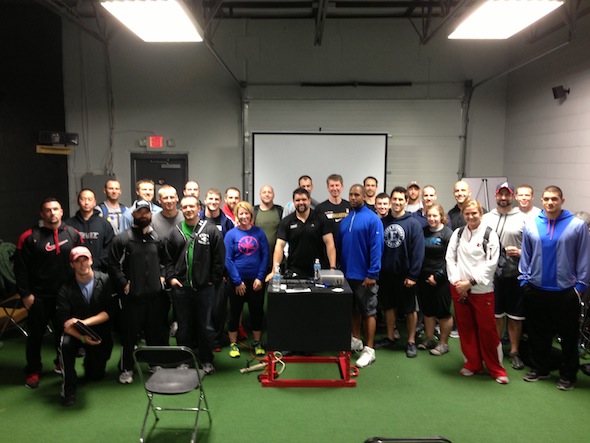 This past weekend, I attempted something totally new with our seminars here at IFAST.

Rather than bringing in a slew of presenters and only allowing them an hour each to present, I brought in two top notch guys in Lee Taft and Nick Winkelman, and allowed them each a half day to speak.

Needless to say, the response was overwhelmingly positive.

The biggest reason I ran this seminar was because I wanted to get better myself. I’ve got a handful of high profile clients that I’m working with, and my biggest knowledge gap to date was speed and agility training.

I know that if I can make these clients faster or more agile, I’m giving them a leg-up on their competition.

After this seminar I know I’ve still got a ton of things to learn, but I also feel like I’ve got a better foundation to build from. I also know that I’m going to be a better coach!

With that being said, here are some of my biggest takeaways from this weekend’s seminar.

This cue alone (via Lee Taft) was worth the price of admission.

Set-up in an athletic stance with a fairly wide base of support. The ankles should be dorsiflexed, the knees bent, and the hips back.

Once in this position, think about “spreading” the floor apart (ala Louie Simmons), or “tearing the paper.”

If you do this correctly, there’s no way you won’t feel the big muscles of your hips and thighs engaged and ready to push you quickly in any direction.

At least five times during the day, I couldn’t help but think to myself:

I wish someone would’ve taught me this years ago when I was playing competitive sports!

Now the big caveat here is that you need adequate dorsiflexion at the ankle. If you don’t have it, don’t force it or your knees are going to get beat-up as a result.

However, this was really affirming and backs up what I discussed a few weeks back in my Case for Big Quads blog post. I’m all for glute and hamstring development, but in true athletic movement and deceleration, the quads are a critical component.

#2 – You Must Learn to Accelerate

For years, we’ve discussed how important it is to work on deceleration before acceleration.

After all, we know that the eccentric component of an athletic movement (such as planting and cutting) is where most athletes get injured.

Deceleration, therefore, is like a foundation. You need to fix that up first.

However, at some point in time, you have to actually work on coming out of that cut.

You can’t train deceleration forever, as the angles and body positions aren’t the same.

When you’re aggressively coming into and out of cuts, you may have to take a wider foot position to find a good angle.

Furthermore, just like there are three phases to lifting (eccentric-isometric-concentric), there are the same three components to athletic movements as well. You need to be stable, yet explosive in all of them.

Cal Dietz talks about this in his Triphasic Training book. The goal is to make that angles of that “V” as steep as possible, while still being in control.

The faster you can decelerate, transition, and then explode out of a cut, the more explosive you’re going to be.

#3 – The Need for Reactive Agility

The first presentation by Nick Winkelman was really interesting, and got me thinking about how to make our agility training more realistic to practice and game environments. 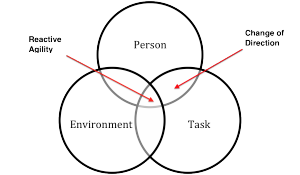 Nick’s presentation focused on the need for reactive agility. Unlike standard change of direction drills like a 5-10-5 or “T” Drill where you know exactly where you’re going, sport situations are different.

You’re in a chaotic environment where numerous things can happen. You’re forced to react to a play, the ball, etc., and it’s important to make a decision quickly and then react explosively.

I couldn’t cut and paste Nick’s graphic here, but the figure I’ve created above is the same. As you can see, when you have a person and a task, you have a standard change of direction drill.

But when you take that person, and combine it with a task and a unique environment, you now have a reactive agility drill.

What was really interesting in this presentation was some of the research that Nick presented on. For instance, you might think that when you look at low-level and high-level sportsmen, the physical changes are obvious. After all, it only makes sense that a higher level athlete is bigger, faster, stronger, etc.

However, in the research Nick cited, it wasn’t so much the raw physical differences such as speed or change of direction that separated the two groups.

Instead, it was when they were evaluated for their ability to make a snap judgement and then react that high level performers really showed their prowess.

One final element that I liked about Nick’s presentation was how reactive agility is a great diagnostic tool for athletes coming back from injury.

While a lot of athletes are tested for leg strength, one thing that’s not evaluated is their ability to react, plant and cut safely and effectively.

While I’ve still got a ton to learn on this topic, I feel as though reactive agility is definitely a tool you want to have in your toolbox, especially for higher caliber athletes.

The final presentation of the day by Nick was on how to effectively plan practices, and coach and cue clients.

Being a coach myself, I’ve always taken pride in my ability to get the most out of my athletes. But it wasn’t until I started learning from Nick in recent years that I realized how misguided some of my thoughts were.

Nick’s primary emphasis in this presentation is how to effectively coach or cue a client. This is obviously a very wide-ranging topic, but here are a few bullet point takeaways.

Focus on external cues versus internal cues. Let’s take an RDL for example. Instead of using the cue “chest up” (which focuses on the body), using something like “touch the wall behind you” which focused more on the outcome.

Beginners need more “block” practice. Beginners need time to figure out how to perform movements, drills, skills, etc. If you’re constantly changing things on them, they’re not going to be successful. On the opposite end of the spectrum, high-level performers will need more variety to keep them engaged and interested.

Cue on 1/2 to 1/3rd of the reps. This is something I’d naturally trended towards over the years, but it’s really easy to inundate a client with too many cues. Instead, focus on one cue over the course of the set, and give it on every second or third repetition. This will allow them time to learn and figure things out for themselves.

Lee Taft and Nick Winkelman are world-class at what they do, and it was an honor and a privilege to hear them present.

And while I’m not sure if Nick has a ton of resources out there other than AP mentorships, if you’re into speed and agility I’d highly recommend picking up a copy of Lee Tafts’ Groundbreaking Speed 2.0 DVD series.

I watched these DVD’s twice prior to the course, and I feel like they gave me a great foundation for my future learning with regards to speed and agility training.

Last but not least, thank you to all of our attendees. It was a great day, a great event, and hopefully I’ll see all of you again soon!