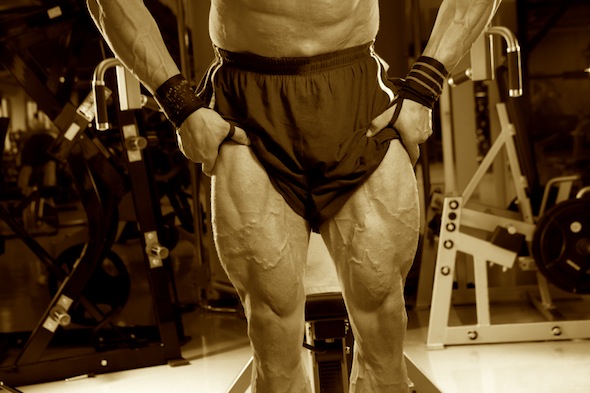 Quads get a bad rap.

But the quads aren’t the red-headed step-child they’re made out to be.

In fact, regardless of your goal in the gym or on the field, strong quads can help you perform at a higher level.

Let’s take a quick look at what the quads really do for you, and from there, we’ll look at how to build them effectively.

There are at least four big reasons I can think of to develop your quads:

Let’s look at each of these in a bit more depth.

To Improve Your Squat

This should be pretty self-explanatory. The quads are a major player in the squat, especially due to it being more upright in nature than a deadlift.

When I was training seriously in powerlifting and started adding in more single-leg, quad-dominant work I saw an immediate increase in my squatting performance.

Even if you’re a low bar squatter, developing some strength and size in your quads is virtually guaranteed to improve your squat numbers.

To Improve Acceleration in Sprinting

While the analysts on ESPN love to talk about fast 40’s, any coach worth his salt knows that football is a game that’s played in a very small box.

Instead of worrying about the 40 (and testing maximal speed), we should be more focused on 5 or 10 yard times, as that’s far more “sport-specific” that a 40.

The first 5-10 yards of any movement is dominated by the quads and glutes. If you want to be faster off the line, build a strong set of quads.

To Improve Planting and Cutting

Another key component of athletic performance is getting into and out of cuts fast. In many sports, the ability to get into and out of a cut fast is the difference between a good player and a great player.

Need evidence that quads are important in these situations?

Just look at how most soccer, football and basketball players are built – they have huge quads, and this is due in part to all the planting and cutting they have to do.

When you go to plant and cut, the hips flex but there’s also knee flexion and dorsiflexion at the ankle. This eccentrically loads the quads, loading them like a rubber band.

And while the hips, groin and core/trunk all play a role, I think we’re too quick to dismiss the role of the quads in lateral agility.

This reminds me of a discussion I had with Eric Oetter a while back. This guy was a stud football player who spent two years at Georgia Tech, and in high school he did a little bit of everything on the field – return kicks, throw passes, played ‘D,’, etc.

He was quick to tell me how fatigued his quads would be after a play where he had to plant and cut numerous times to break tackles or avoid defenders.

The bottom line is this: If you want to be a beast on the court or field, strong quads will help.

I know at least a handful of you reading this want a higher vertical jump, so driving up those squat numbers and building a bigger set of quads can help you get there faster.

For Shock and Awe

I heard a story years ago about Kirk Karwoski, owner of a 1,000 pound squat in the 275 pound weight class.

The interesting thing about Karwoski’s squat-style was that it was far more quad-dominant than most. This, obviously, lends itself nicely to a set of enviable quads.

The US National powerlifting team is in some remote section of the world and sitting down for lunch in a local restaurant, and Kirk is wearing shorts that are about mid-thigh in length.

The servers at this particular restaurant obviously notice that the people sitting down to eat aren’t normal human beings, and are obviously staring at this group of super-human beings.

A female server comes over, and Karwoski pulls his leg out from under the table and immediately flexes his quads. The server damn near keels over in shock from the size of his massive thighs.

If your only goal is aesthetics, I get it. Big quads are cool.

And if you’re a woman reading this, don’t shy away from heavy leg training.

Any guy who trains seriously respects a woman who has trained hard to develop her lower body. The only people who don’t get it are either in the fashion industry or lay media.

Nobody cares about them, anyway.

So you’re serious about building a big set of quads – how do you go about doing it?

I covered this pretty extensively in this article for T-Nation, but let’s recap here as well.

The two biggest determining factors as to whether an exercise is more focused on the quads or the hips are:

At the torso, similar rules apply.

So when you start to put these pieces together, it looks something like this:

This little recipe will help solve 95% of your questions as to whether an exercise is quad or hip dominant.

And if you’re still left wondering, do what Arnold used to do when he wanted to know what muscle group an exercise trained…

Perform 20 sets of 20 for that muscle group, and see what’s sore the next day J

Now that we’ve covered the principles, you should be able to determine what exercises are quad/hip dominant in your programming.

But I know some of you want to know my favorites, so here goes!

Not only are they fantastic for building the quads, but they also promote total body mobility through all the major joints (ankles, knees, hips, t-spine, etc.) but strengthen the anterior core as well.

Last but not least, they’re far easier to coach than a back squat!

Technique cues to focus on here include:

Bulgarian split-squats (also known as rear-foot elevated split-squats) are a fantastic exercise for building both the quads and glutes.

I don’t think they’re nearly as good as front squats for building total body strength, but there’s something to be said for building strength and stability in a unilateral fashion.

(This is an older video, and ok for general performance. If you want more quad development, narrow up the stance front to back a bit.)

Technique cues for the Bulgarian split-squat include:

Last but not least on my list of favorite quad-dominant exercises is the low-handle trap bar deadlift.

While I typically coach the trap bar deadlift using a very hip dominant approach (vertical tibia and angled torso), you can absolutely perform the exercise in a more upright fashion t shift the focus.

When you stay tall/upright and allow the knees to glide forward, this exercise can be very quad dominant.

Technique cues for the low-handle trap bar deadlift include:

Before I start getting hate mail, let me say that I fully understand the importance of the posterior chain.

And if you don’t belive me, just review my Blog or Article archives here on the site. I think you’ll notice a theme there, and I know that the posterior chain is critical not only for injury prevention but performance enhancement as well.

But don’t throw the baby out with the bath water here.

If you want to maximize performance, building a set of big, strong quads can be a game changer.