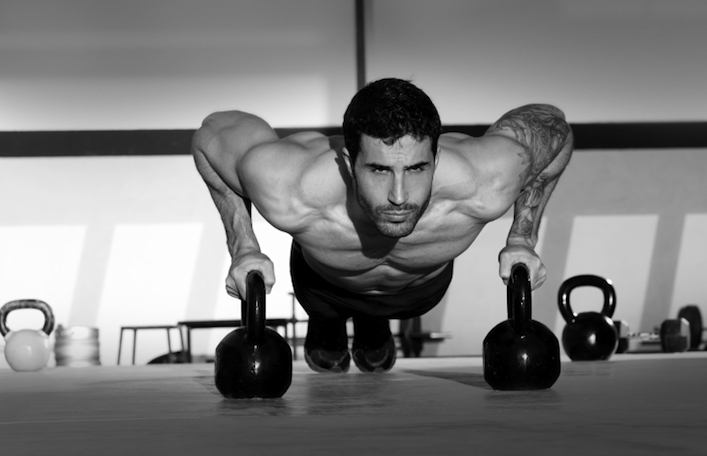 Let me start by making one very important point:

Not everyone can, or should, barbell press.

And taking that a step further, there are plenty of people who should be excluded from other big-bang exercises and variations as well.

I’ve worked with athletes of all shapes and sizes over my career. I’ve seen competitive powerlifters with the worst mobility you can imagine, and I’ve seen gymnasts and divers with so much range of motion and instability it would make you sick.

So when it comes to shoulder training, there’s definitely not a “one size fits all approach.”

However, over the course of time there are certain exercises that I’ll use in more cases than not, and that’s what I’ll be sharing with you here today.

This is a great question – how did I come up with this list of exercises?

In other words, what puts an exercise on this list, or on the flip side, keeps it off the list?

Here are a few things that I consider:

The exercises should be safe for almost anyone.

While there are tons of other great exercises that we could put on this list, I’m trying to find fairly benign exercises that every people with very unstable shoulders can perform safely and effectively.

However, there are always outliers, and some shoulders are worse than others. Just keep in mind that not all variations may be suitable for all clients/athletes.

They are more horizontal in nature.

Going overhead isn’t easy, as you need a whole bunch of things to happen at once:

So as you can see, there’s a lot of room for error, so initially I start with horizontal variations (or at least exercises that minimize the vertical component).

They emphasize either static stability, or reaching.

This could lead to a much bigger post, but suffice it to say that static stability is critical, especially early-on in a program. Quite simply if you can’t stabilize your shoulder when it’s simply holding posture, how can you expect it to do so while moving through a range of motion?

Second, learning to reach effectively is critical as well. This is something that I’ve taken from PRI, but the ability to reach not only engages the serratus, but it repositions the rib cage and abdominals (so that the diaphragm is in a better position), and helps us regain our natural kyphosis.

There’s a lot of good stuff in that last paragraph, so make sure to read it again.

Furthermore, many rowing and chinning variations lead to extension elsewhere in the body (typically the lumbar spine) as a compensatory strategy. Plus, when you consider that many people need a ton of coaching and cuing to row/chin effectively, I’ve left them off this list.

So keep in mind I’m not saying rowing and chinning variations are bad. Instead, I’m saying when I’m starting off with someone that has shoulder issues, I may not use them early-on in my programming.

So with that being said, here are my 3 favorite exercise variations to get sexy, stable shoulders.

Needless to say, I’m a big fan of the landmine press.

Even though not everyone has the pre-requisites to press overhead safely and effectively, using a landmine to split the difference between horizontal and vertical pressing works pretty darn well.

The landmine is also awesome because you can use it in some many different postures and positions.

For example, we’ll often start our clients off with a half- or tall-kneeling landmine press to start. These postures can be incredibly challenging, as they not only develop a solid pressing/reaching pattern, but they also re-build the core.

Once things are going well in a half- or tall-kneeling posture, you can definitely progress into standing variations of the landmine. The nice thing here, again, is that you’re pressing at an angle (versus truly overhead), which requires a lesser degree of mobility and stability throughout the body.

When coaching/cuing yourself or an athlete, think about the following:

#2 on my list is the arm bar, and all of it’s myriad variations.

Plus, these variations also help connect and re-engage the core, so they’re a wonderful place to start when you don’t know where to start.

When cuing these arm bar variations, again, think about exhaling to engage the abdominals, and find the happy middle ground for your shoulder position.

Instead, think about a subtle, active “reach” to set the shoulder appropriately.

And if you want to tweak this and take it to the next level, feel free to add in a screwdriver, where you slowly internally and externally rotate the shoulder at the midpoint of the lift.

The standard arm bar is also a fantastic exercise, but it may not be appropriate early-on. If someone has a tendency to extend through their lower back, this could irritate the issue (or make it worse).

Furthermore, if someone is lax through the front of their shoulder*, then this progression may not be your best choice.

(*My good friend Eric Cressey has noted that many of his baseball players come back lax in the anterior shoulder following the season, and as such, doesn’t use this variation until later.)

When performing the standard arm bar, a few things to consider:

Once you’ve exhausted your range of motion through the hips, feel free to use a screwdriver for 3-5 repetitions to really improve shoulder and scapular stability.

I know what you’re probably thinking at this point?

That’s the best you can do?

But I’ll be honest, I love push-ups for people that have a history of shoulder pain or dysfunction.

First off, push-ups are fantastic because they are closed chain in nature, which will blow up your stabilizing musculature like your rotator cuff.

Second, they teach us to reach, which we know is huge.

Third, they engage the core to a high degree. And you can’t have those sexy, stable shoulders if your core is a hot mess.

And last but not least, there are so many damn variations and tweaks that you can almost always find one that works well for you.

The standard push-up is a great place to start.

When coaching and cuing the push-up, here are a few things I focus on:

And even if you don’t have the strength to do a standard push-up from the ground, you can still do them in a power rack on an incline to get the same benefits.

The push-up to downward dog (PUDD) is a bit more advanced progression, as it requires a bit more coordination and mobility.

But the cool thing about PUDD’s are that they start to bridge the gap from horizontal to vertical pressing, all while staying in closed chain and keeping our rotator cuff happy.

Now some of you are probably thinking, “Damn Mike – how do I get all yoked doing these basic exercises?”

If the standard version is too easy, feel free to load up some of the following progressions and engage beastmode!

Last but not least, maybe more loading isn’t your thing – or you’d rather focus more on stability versus strength.

If that’s the case, I love using a push-up to single-arm support. This variation gives you all the benefits of the standard push-up, but the stability demands through the sholuder and the core go through the roof.

You can also go a step further and really crank up the stability demands via a med ball push-up or unstable surface variation.

When you combine all the tweaks and variations of push-ups you can choose from, with all of the good stuff they provide your body, it really was no contest as to why they’re firmly camped as the #1 exercise on my list.

If you strength train or play sports long enough, chances are you’re going to run into a shoulder issue sooner or later.

And when that’s the case, refer to and use the exercises on this list. They’ve improved the health and function of many shoulders, and I guarantee they’ll work for you too!