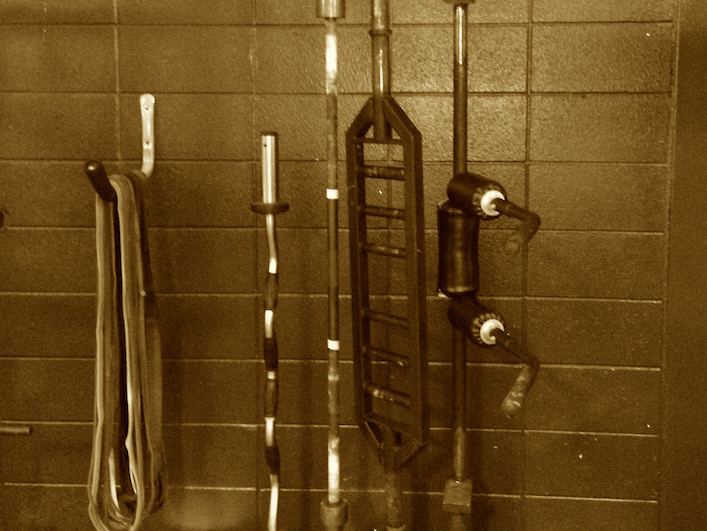 As a reformed powerlifter, the move away from strictly barbell exercises was not easy.

Because let’s be honest – the barbell squat, bench and deadlift are fantastic ways to get strong.

However, in my effort to build the most complete athlete known to man, while simultaneously keeping them healthy, sometimes the barbell falls by the wayside.

If you train athletes for a living, here are a few of my favorite exercises that utilize specialty bars in lieu of a barbell. Each one has unique benefits, and can often be a key difference maker in the health and performance of your athletes.

It should come as no surprise that the trap bar deadlift is the first exercise on my list. In my opinion, it is the safest and most effective deadlift variation that you can use with athletes.

First and foremost, I have yet to train an athlete whose posterior chain (glutes and hamstrings) are as strong as they can and should be.

But taking that a step further, I just love the groove of the trap bar for an athlete.

The traditional barbell deadlift puts the weights in front of the body, and can make for a somewhat unnatural starting position.

The trap bar deadlift, on the other hand, utilizes for a more natural body alignment, and when using the high-handles, decreases the range of motion (ROM) necessary to deadlift with a neutral spine.

If you’re going to train athletes, the trap bar should be the first specialty bar you add to the arsenal.

The safety squat bar (SSB) front squat is an awesome front squat variation for your athletes.

You start with all the great benefits you get from a front squat, which include (but are not limited to):

But the best thing about a SSB front squat versus a barbell variation is it minimizes unnecessary stress on the upper extremity.

After all, if you’re working with someone whose wrist, elbow and/or shoulder is worth millions of dollars, the last you want or need is extra loading or stress in the gym!

Another great benefit to this exercise (versus, say, a 2-KB front squat), is the ability to comfortably increase the load used. The 2-KB version is great, but at a certain point getting the ‘bells into the starting position becomes really, really challenging.

Let it also be known that  I won’t shy away from loading this baby up. We all know the benefits of strength training and getting our athletes stronger, so if I have an exercise that minimizes stress and allows me to load the athlete to a high-degree, that’s a huge win-win.

Another squat variation using the SSB is the traditional back squat.

Here you get the benefits of a back squat (i.e. greater posterior chain loading, more total load, etc.), but again, you greatly reduce any stress on the upper extremities.

One thing I’ve found with the SSB is that it’s much more akin to the groove of a front squat or high-bar back squat, versus a powerlifting-style back squat. It’s more of a “straight down” squat versus a “sit back” squat.

And with that being said, please don’t load this thing up and expect to move the kind of weights you’re accustomed to in a back squat!

Whether it’s the higher bar position, the decreased stability you get from muscles such as your lats, or a combination of the two, the SSB back squat is definitely a different animal.

Regardless, if your goal is to get strong while keeping the upper body healthy, the SSB back squat is an awesome tool to have in the toolbox.

I’m going to lead by saying this – a SSB good morning is not my first choice for an athlete.

A powerlifter? Sure. But not an athlete. Most have major issues controlling extension in the first place, so the last thing I want to do is put them in a very bent-over posture with a load on their shoulders!

With that being said, this can be a viable alternative for someone that has wrist or grip issues, and wants/needs more loading for their posterior chain.

The SSB would essentially replace a Romanian deadlift (RDL) in the program, and should be used as a supplemental or assistance exercise to build the glutes and hamstrings.

(Brief side note: I’ve used the SSB with great success for numerous single-leg exercises as well {i.e. step-ups, lunges, etc.}. I typically reserve these options more for injured athletes, but feel free to give them a shot and see if you like them.)

I know athletes love to bench.

I know it, and I get it. There’s something hardwired into most males’ DNA that draws them to the bench press like a moth to a flame.

But a barbell bench press isn’t always the best option, especially if you have a case where you want to protect someone’s wrist, elbow or shoulders.

With regards to the Swiss bar, the neutral grip you use naturally reduces stress on the shoulder. It’s a more natural position and gives the rotator cuff room to breath versus a standard barbell version.

Last but not least, a standard barbell isn’t the best option for an athlete whose shoulder rotation is asymmetrical.

With the SWIS bar variation you get many of the benefits of using a barbell (most notably, more loading), but with reduced wear and tear on the upper body. I really like it for football players, as any stress and pounding I can take off the shoulders is a bonus.

A derivative of the bench press, the Swiss bar floor press further reduces stress on the shoulder by limiting range of motion. This can be used either as a progression back to bench pressing, or as a stand-alone exercise.

I’m a huge fan of push-ups for athletes. I think they’re fantastic not only as an upper body pressing exercise, but even more so because it forces the core to tie the upper and lower bodies together.

The Swiss bar push-up also puts the wrist in a more neutral alignment, which can minimize stress and make the exercise more comfortable.

And of course, you get the added benefit of being in a neutral-grip, which is more shoulder-friendly than a standard pronated grip.

If you have any sort of upper body issue, give the Swiss bar push-up a shot in lieu of the standard push-up on the floor. I think you’ll really enjoy it.

Most athletes need some degree of upper body power, or at the very least, could benefit from some explosive upper body work.

Some of the obvious choices you have at your disposal include plyo push-ups, med ball throws, and push presses and jerks.

Med balls are great, but you don’t always have a place to throw them.

And the underlying issues with presses and jerks is the fact that many of our athletes don’t have the ability to go overhead safely and effectively.

The landmine push press is awesome because it’s unilateral (one arm at a time), which make shoulder mobility asymmetries a non-issue. Furthermore, on a landmine you’re pressing at something closer to a 45 degree angle than directly overhead.

The groove is a little awkward at first, but you’ll figure it out rather quickly.

If you’re interested in picking up any of these bars, you can find them via the links below.

Keep in mind I don’t get paid for recommending them – I just like them and feel they can provide tremendous benefits in your programs.

And if you want or need coaching on the big lifts I outlined above, please check out these articles.

When you’re writing a program training for athletes, it’s imperative that you don’t simply pick your favorite exercises.

The goal is to choose exercises that are going to give the athlete the biggest return on investment, while simultaneously keeping them healthy to boot.

Give a few of the exercises above a shot – I think you’ll love them!