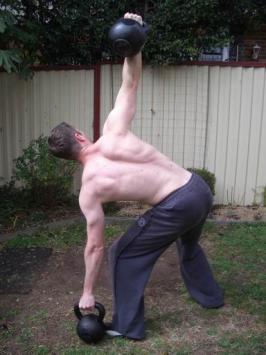 One of the consistent themes I see at IFAST when working with new clients is torso/core weakness.

(Really from this point forward, I’m going to use the term “trunk” versus “core.”  It’s much more all-encompassing, and doesn’t have the negative connotations associated with the words “core training.”)

It’s pretty sad when you’re getting young, healthy males that are physically unable to hold even the correct starting position for a front or side plank.

Taking it a step further, keep in mind our “norms” for these tests are a 120 second front plank, and a 90 second side plank on each side.  And these guys can’t even get into the appropriate positions to start the test!

What I see, primarily, are kids and adults alike who have grown up training on machines, or in more “stable” environments, without the many benefits of basic free weight exercises.  The myth that they only need to train one body part per day has led to a situation where one entire workout is done laying on their back (chest), another workout includes every isolative shoulder raise known to man (shoulders), and of course, you can forget arm day!

While it may not be the only influence, starting your training off like this has drastic side-effects.  Eventually, what you end up seeing is this body that looks great from the waist down, and possibly even better from the chest up, but there’s nothing in-between to tie them all together!

It’s as if there’s a collection of body parts that, aesthetically, may look quite appealing.

But when asked to work together as a cohesive unit, however, they often aren’t up to the task at hand.

Ask this guy (or gal) to front squat, and they curl up in the fetal position.

Have them try and perform a push-up and their low back sags so low their hips touch the ground.

Quite simply, their torso strength is not on par with the rest of their body!

To counteract this, try creating workouts that are constantly challenging the torso in conjunction with the rest of the body.  Here are a couple ideas to get you started:

1 – Take away the torso support.

Don’t include any bench press variations or rowing variations where the torso receives external support.  Instead, it’s only push-ups, inverted rows and similar exercises until trunk strength and stability gets up to snuff.

2 – Use more offset loads in your workout.

One of my new favorites is a kettlebell offset front squat, where you only get to hold a weight in one hand.  This really cranks up the need for torso stabilization, while concomitantly reducing the load.  In actuality, any lower extremity exercise where you use an offset load is probably superior for the time being!

A few months before Dan John’s DVD’s came out, we were already including more farmers carries, Waiter’s walks, etc., due to the research by Stuart McGill on the topic.  Not only can offset loading increase trunk stability, but they work the hip stabilizers hard as well.

3 -Don’t forget the isolative work to get you started.

Here’s the key: Until the torso is no longer the limiting factor, you don’t have any business continuing to grow the prime movers in isolation!

I’m curious, though:  Have you guys and gals seen this as well?

And if so, what changes are you all making to your programming to correct these issues?

I look forward to any and all comments below!