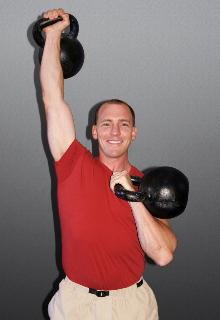 This past weekend we hosted a KB seminar at I-FAST, with Master RKC instructor Brett Jones being the guest of honor.  We had about 17 attendees, and I’m pretty certain I can say that everyone learned a ton.

I’m the first to admit I don’t know all that much about KB training.  Sure, movement is movement whether you’re using a KB, DB, or barbell, but there are obviously some differences between each medium.  I wanted to bring Brett in not only so that other members could learn more about KB training, but myself as well.

As well, I’m going to be attending the RKC in Minneapolis in April, so this was an excellent chance to hone technique and see exactly what I was getting myself into.  Here are some random thoughts after spending an entire day getting acclimated to the lifts.

–  Just like it’s easy to spend an entire day working on the squat, bench or deadlift, you quickly realize how easy it is to spend time on the KB lifts as well.  I would say the first 2 hours of the workshop covered the nuances of the swing.  This wasn’t a big issue when I started off with a 12 kg KB, but when I got “upgraded” to the 24 for the rest of the afternoon my outlook changed drastically!

–  You absolutely CANNOT learn KB techniques from a video.  Can you get a general understanding and appreciation of the lifts?  Sure.  But there’s simply no comparison to being taught by a knowledable coach.  It’s the same as learning any major lift – it you are serious about getting better, you need to get with a qualified coach.

–  I’m sure I’m not the first to have this sentiment, but the Turkish Get-up is just a beast of a lift.  I was sweating profusely just using my bodyweight!

–  One thing I like about KB lifts it not only how the integrate your entire body into the lift, but how they help you find assymetries as well.  Those little asymetries may not be evident in a squat or deadlift, but in a TGU where you need hip internal/external rotation, amazing core stability, and a host of other physical qualities they become quite evident.

–  I don’t think my adductors have ever been this sore before.  Period.

–  Much like video, it’s almost impossible to learn great technique from articles.  Again, you can get the basics down and get pretty good, but sometimes the articles aren’t even right!

For example, I read a KB article a while back which described the windmill position backwards!  Instead of the back leg being straight, this article described the front leg as being straight.  After doing it this way for several years, it was quite challenging to re-learn the technique with my legs doing the opposite of what they were used to.

–  In lieu of the RKC in April, I really need to get my hands prepared for the ensuing trauma.  By the end of the day, my hands were absolutely trashed and I think another hour or so would’ve ripped the calluses from my hands.  If one day can do that, what can three do?  Time to get my game face on…

All in all, it was a great weekend and I learned a ton of stuff from Brett.  It was also great to watch him coach and see that a lot of the things Bill and I are doing get results for others as well.

Before I sign-off for the day, I’d like to give a few plugs for people who helped out:

–  Thanks to Rick Huse for allowing us to use his KB’s all day.  Rick is a super smart, and all-round good guy.

–  As well, thanks to Jason Thompson for his KB’s as well.  Jason designs some sweet KB related gear, so be sure to check him out at his website www.GiryaNation.com.