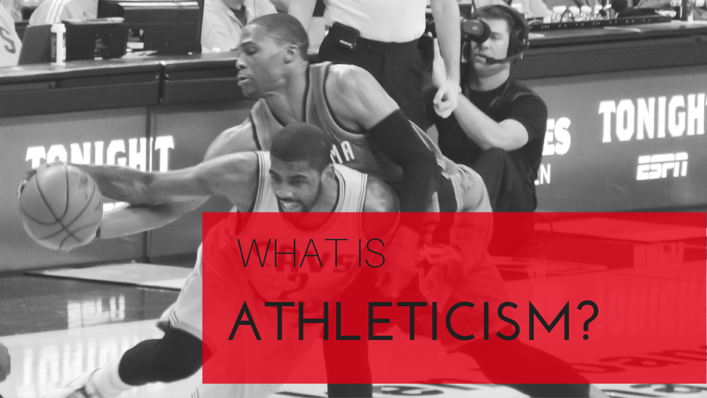 Is it LeBron James?

What about a gymnast – is he/she athletic?

And one more question: Who is more athletic – Stephen Curry or Russell Westbrook?

You said Westbrook didn’t you?

I don’t blame you. But let’s define what athleticism really is and then make the decision.

We typically define the best athlete as the one who can jump the highest or run the fastest. We have combines, websites and services dedicated to collecting this data. Athletes lose or gain millions of dollars because they ran slower or faster than the next guy.

Businesses profit from holding combines around the country but what do these combines tell us? Athletes boast about their measurable and get labeled because of them.

But that seems like a narrow and limited view.

If the best athlete was the one who ran the fastest and jumped the highest then the upcoming NFL draft would be easy to predict. Just go in order of the NFL combine results.

Do you remember Vernon Gholston? Maybe if you are a New York Jets fan. He was touted as one of the biggest freaks in the 2008 draft. Here is what they said about him…

…Blessed with incredible speed (clocked at 4.56 in the 40-yard dash), long limbs and superb strength, Gholston is the prototype pass rusher that professional teams look for — big, fast, strong and explosive.

An avid performer in the weight room, he boasted the best bench press on the team at 455 pounds. He also put on an impressive performance for teammates, squatting 405 pounds 20 times.

My point is there is more to athleticism than measurables. I prefer to define athleticism as Dictionary.com does.

“Athleticism is the use of physical skills or capabilities.”

I also like to include past experiences in athleticism because it is what has caused your nervous system to adapt. Running and jumping aren’t the only physical abilities.

Aren’t those skills as or more important to sport than running and jumping? Power is just one piece of the delicious athletic pie.

Let’s look at Steph Curry and Russell Westbrook now and how they use athleticism differently.

Steph Curry may not beat too many NBA point guards in a race (there are so many athletic point guards in the NBA right now!) but somehow he routinely gets by his man every night against the opposing team’s best defender. How?

Russell Westbrook also drives opposing teams crazy getting to the rim nightly and forcing coaches across the league to go gray.

One man relies on feel and reaction and the other relies on raw power.

Westbrook stays on a line. It’s either a straight drive to the rim or a quick pull up jumper. Curry, on the other hand, might do five different things before getting where he wants to go.

The purpose of this article isn’t to highlight two of the most entertaining players in the league.

It’s to highlight the “other side” of athleticism.

Curry is a scratch golfer on top of arguably the best shooter and ball handler in the NBA. What do all 3 of those have in common?

You know that guy who is “deceptively quick”, maybe he just sees his environment and can react to it better?

He may not have the raw measurables but somehow finds his way past defenders.

He understands change of pace, faking, timing, and had enough skill and ability to meet his physical goals.

Maybe that athlete has the ability to narrow their focus a little more in the moment of action and pour more energy into that action than their opponent.

(Side note: Really cool fun fact I just learned about Michael Jordan and why he sticks his tongue out when going to the basket…thrusting the tongue creates systemic extension which narrows the athletes variability and increases their focus on fewer things or one thing. Jordan needed all his body would give in order to blow by and dunk on the opposing team. Thrusting the tongue was how Jordan achieved that max effort.)

So how does this come together in training?

In Josef Drabik’s book “Children and Sports Training”, he outlines physical education programs for young athletes. The younger the athlete the more game-like the program.

We recently had a father want to pull his 10 year old son out of our Long Term Athletic Development program at IFAST because he did not see how playing tag, ultimate Frisbee and keep away made him a better athlete.

Take tag—put a football in there—and now its football.

These games develop not only speed but all other aspects of athleticism: Reaction, acceleration, agility, urgency, focus, feel, coordination and more.

So that’s the point of all this – to make you think critically about what athleticism is, and how we choose to define athleticism in our industry.

P.S. – What about you? How would you define athleticism?