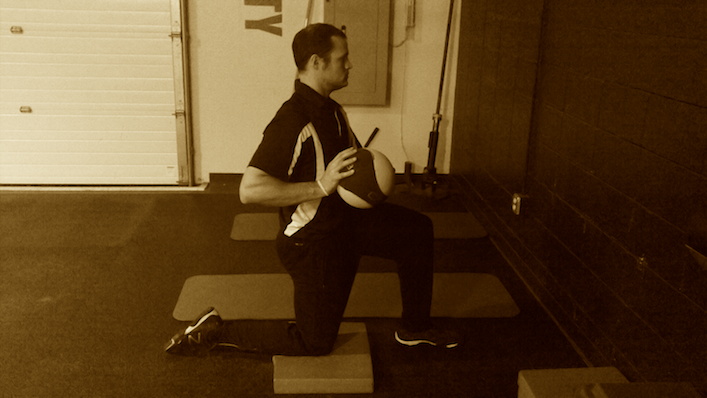 There are a few things that I really love in life.

Today we’re going to talk about the ins-and-outs of half-kneeling exercises, and I’ve got five hacks that I know will make your half-kneeling even more effective than it is currently.

But before we go there, let’s talk about why half-kneeling is such a powerful tool to have in your toolbox.

Why should we use half-kneeling?

One of the big focal points of any program that I write is to regain core stability and control.

Too often, clients present with a “scissored” posture – the ribs are flared on the top, and the pelvis is tipped forward down below.

When this happens the diaphragm and pelvic floor are no longer facing each other, and core/lumbar/pelvic stability is compromised.

Instead, the goal is to get the ribs down and the pelvis up, so that you essentially create a pressurized “canister” for maximal stability.

Regaining this canister position allows for improved respiration, a decrease in hip flexor and lumbar extensor tone, and improved integration between the upper and lower bodies.

And while many would think “that looks so easy,” I would implore you to do these exercises with focus and intent. Remember, the goal isn’t to sloppily throw some weight around.

Really focus on purposeful, well-executed movement and I guarantee you’ll have a new found respect for half-kneeling.

Now that we’ve covered our bases, let’s get into our hacks!

The first step to a perfect half-kneeling position is getting into a legit 90-90 position.

What does this mean? Easy…

What I like to do is have my athletes try it for themselves first. Get into what they feel is a clean 90-90, and then I reposition them so they can feel what it should feel like.

Here’s the thing – too often when people get into a half-kneeling position, it’s half-hearted.

They don’t take the time to really get into a great starting position, and as the set goes on, it progressively gets worse and worse.

For half-kneeling and tall-kneeling work, the set-up is everything.

If you get into a crappy starting position, you might as well not even do the exercise.

After all, it’s not like you set up poorly and magically get better when the set goes on, so take your time and do it right from the onset.

Once you’ve got a rock-solid 90-90 position, it’s time to move onto the frontal and transverse planes.

In the frontal plane, there are two main issues you can see:

Fixing a hiked hip is a pretty simple fix – just keep bumping the “down” knee up to a point where the hips are level. We use Airex pads at IFAST, so if one isn’t enough, we simply get another pad to get their pelvis level from side-to-side.

On the other hand if someone has a tendency so “sag” into their stance hip, you can go a couple of routes here.

My first option is always to let the client/athlete fix this on their own. I will make them aware of the issue, and see if they can make a correction.

If not, I may take my hand and physically push them (gently, mind you) into the right position and see if they can hold it.

Last but not least if they can’t fix it, then we can use a reactive neuromuscular technique (RNT).

To use RNT, you essentially pull them further into the compensation, so they are forced to work overtime to correct it.

So let’s say someone is working on half-kneeling and when their right knee is down/left knee is up, they sag into the right hip.

I would take a band, place it on their left hip, and pull them even further to the right.

The transverse plane is a bit trickier. If someone is rotating through their pelvis to the right or left, most athletes can’t figure out how to make this correction on their own.

To expedite the process, I will physically take my hands and spin their pelvis to put it in the right position.

Once square, I will give them the headlights analogy:

“If you’re driving a car, you want your headlights pointed straight ahead. Yours were pointing over here, so now you should feel the difference when they’re pointed in the right direction.”

While I could probably coach and cue them into oblivion, this seems to fast track the correction, but it also gives them a visual in their brain going forward.

Hack #3 – Get Your Canister

Once you’ve got your athlete dialed in from front-to-back and side-to-side, I’m sure you both are chomping at the bit to get rolling.

But not so fast.

This next step is critical to getting as much as possible out of half-kneeling. 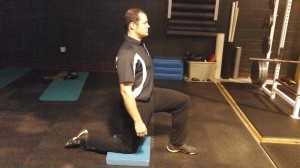 Collectively, this is simply called a “scissored” posture, and it’s often noted by a protrusion of the abdomen.

When you’re in this posture, your diaphragm and pelvic floor are more angled in their alignment than they should be.

Instead, the goal should be to get them both the diaphragm and pelvic floor into a more horizontal alignment, so that they can work in unison to create core stability.

To get into a great starting position, think about this as two separate (yet related) battles:

To get the ribs down, breathe in through the nose and then exhale through the mouth forcefully. If you watch yourself do this in the mirror, you should be able to see the lower ribs drop down into a better position.

Unfortunately, that’s where most coaches stop. Getting the ribs down isn’t a bad thing, but it’s only half the battle. You also need the pelvis (and by extension, the pelvic floor) underneath you.

While I used to cue a hard glute contraction, I’ve left that notion by the wayside. It works, but it doesn’t give us the correction that we want.

Instead, what I’ve been doing for the last year or so is cuing my athletes to “roll” their pelvis underneath them into a more neutral position.

For some, this is incredibly challenging. And if they can’t figure it out in half-kneeling, consider regressing them to quadruped or supine exercises for a short period of time.

However, if you can simultaneously get the ribs down and the pelvis underneath you, you have effectively put the abdominals in an ideal position to stabilize the front side of your core and pelvis.

Once you’re in a perfect position, it’s time to actually do the execise.

So you’re cruising along in your half-kneeling landmine press (or row, or chop/lift, or whatever), and you knock out 8 reps in about 10 seconds before doing the same thing on the back side.

Slow down there, boss man.

You know how we spent an inordinate amount of time getting into the right starting position?

So if you just go from there to 8 reps quick and dirty, I guarantee you fall out of that great position.

Instead, what you should do is break into down into mini “sets.”

If you’re really struggling with half-kneeling, you may have to reset every rep or two to make sure you’re in the ideal position. Gray Cook has said numerous times that instead of thinking of 1 set of 8, think about 8 sets of 1 rep.

If you do this, I guarantee quality goes through the roof.

What I find useful is to have the client perform a rep or two, and then simply cue them to “reset” when they start to lose their alignment.

In a perfect world, once they’ve been in that perfect position then they can get back into it on their own.

And if not, I will help put them back there until that position is engrained in their head.

As you’re going through a set, sometimes little things crop up that weren’t there before.

Or maybe you give them the “reset” cue and they can’t get themselves back int position.

While coaching half-kneeling, you have to watch for little compensations that will crop up throughout the set.

Are they losing the lower ab control over the pelvis?

Are their lower ribs starting to pop up?

Are they starting to lean further and further forward?

These three are easy, and typically a one word cue can fix the problem. But here are two that you’ll also see in an effort to get stability from somewhere else. 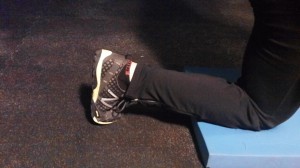 Pressing into the toes – If someone doesn’t have great stability in a half-kneeling position, they’re going to try and get it from somewhere that we don’t want.

Often, you’ll see them start pressing their toes into the ground on the back foot.

If that’s the case, I’ll often just plantarflex their foot, and rest it on the ground. 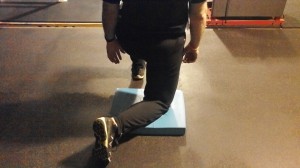 Another common issue is that they start off looking great, but as they fatigue they externally rotate the “down” hip. This may be seen up top as their belly button or pelvis starts to veer off, but I most often see it in the lower leg.

To fix this, I do two things:

This is often a noticeable difference, as someone that though they were quite stable gets a cold, hard dose of reality.

Regardless, be cognizant of all these little things, because chances are your athletes will be making one (or more) of these mistakes.

A Few Notes on Half-Kneeling

One of the first things I try and relay to my athletes is why we’re doing half-kneeling.

Maybe it’s to build their abs.

Regardless, never have I told them the goal is to move a ton of weight.

The goal of half-kneeling work is to improve stability. As such, I don’t care about how much weight they use.

Instead, I want them to work on becoming more and more stable over the course of time.

One of my favorite analogies is what I call “your last beer.” And if you don’t drink beer, use whatever their favorite beverage is – milk, pop, wine, etc.

Either way, kids or adults, it’s good for a laugh and gets their attention.

For whatever reason, you have this one final beer and it has to rest on both your knee and your head while you do this ridiculous exercise.

You really want this beer. Want it bad.

Like to the brim, about to spill just holding it full.

Now it’s resting on your knee or head, and you have to do this entire set without spilling one ounce of that beer.

Do you see the visual I’m trying to create here?

It’s not about load with half-kneeling exercises. It’s all about stability. And control. 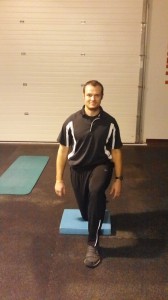 Furthermore, if you are using a bit of weight and just crushing it, continue to further challenge stability by moving the legs more and more in-line.

By narrowing the base of support, you make stability more and more crucial.

Look if I want to get strong I’m going to squat or deadlift. But if your goal is to get more and more stable, or to tie the upper and lower bodies together, then use half-kneeling.

Just make sure to do it the right way for maximal effectiveness.

Quite simply, this is one of the best ways possible to make someone stronger, more stable, and more resilient, all at the same time.

If you’re serious about getting better, incorporate some well-executed half-kneeling work in your programming.

Your body will thank you.