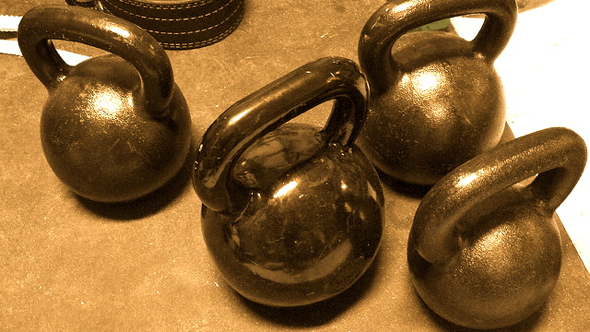 Yesterday I did a one-on-one kettlebell training session with a client.

And before I get any crap about 1-on-1’s, I’ll be writing a business post about that in the very near future. So try hold your sarcasm back for another week or two 🙂

Today’s post – while not uber exciting – while hopefully give you guys a bit of insight as to how I coach, and some of the progressions I use to improve clients’ kettlebell technique.

My client was new and had come in with the desire to learn some basic kettlebell techniques. She’s actually from Bloomington, and wants to join a Crossfit there once she’s a bit more comfortable with the lifts.

I applaud her, though, for making the effort to come and learn first. She realizes that just like any form of strength training, poor technique or performance can get you injured.

After a quick assessment of any current and/or previous injuries/surgeries, we did a bit of foam rolling and dynamic flex to loosen her up, and then we got right into the session.

The swing is the cornerstone for all the basic kettlebell lifts. The biggest issue you see with women (and many men) who try to swing is too much quad-dominance, or the tibiae/knees drifting forward.

To gauge her ability to maintain neutral spine and hip hinge/load her glutes and hamstrings, we started with a piece of PVC pipe in her hands and stood her about 6 inches away from the wall. Performing a basic RDL motion, I had her “push back” until she touched the wall.

When she could do this easily, we moved her out a bit away from the wall. This really forces your clients to push back, and doesn’t allow them to hang on their quads. If their knees start drifting forward there’s no way their touching the wall!

Next, we put a light kettlebell in front of her, and assumed a more normal “swing” stance – feet wider than shoulder width apart, and toed out. We set the kettlebell a few inches in front of her, so she would have to push her hips back to reach forward and grab the ‘bell.

We repeated this 8-10 times, and then I wanted to watch her actually swing.

My client claimed she head learned to swing from various books from Pavel, but it’s always different learning in person versus from a book. I had her swing 10 times, and she had a few major issues we needed to address:

For the quad dominance, I simply reminded her to sit back. Her knees drifted more as she fatigued, so I would place my hand in front of her knees as a kinesthetic cue to sit back. This made an immediate impact and she started to load the glutes/hams much more.

For taming the arc, I used the Dan John cue of “attack the zipper” (I friggin’ love that one!). There’s no nice way to put it – you need to swing the ‘bell like you’re going to hit yourself in the crotch.

Finally, to improve hip extension all I had to cue her to do was finish “tall” and think “hips” at the top. Immediately she got full hip extension and had a lot more pop on her swings.

Within 20 minutes we had seen a huge shift in her performance and technique, so I wanted to dabble with some other exercises.

My client mentioned that she had tried snatches before, but that she had beaten up her forearms quite a bit in the process. If you’ve ever snatched before you know when you’re learning, you’re going to get beat up a bit, so I fully expected this.

To get her snatching, we switched from 2-hand swings to 1-hand swings. We started light and focused on maintaining hip drive, and working the ‘bell from a position of neutral at the finish, to a thumb down position by the hips. We did 2-3 sets of 10 each arm, and then switched to high swings (eye level).

These looked fantastic, so the next step was to actually snatch. Before we did this, I demonstrated to her what proper alignment looks/feels like when receiving the ‘bell.  The wrist should be neutral and in-line with the forearm (Note: this will be an upcoming video post). Once comfortable, I had her do a set of offset waiter’s walks to get more comfortable holding the ‘bell overhead.

Like many other trainees, she also had a tendency to “shrug” her shoulders, so we put a heavy emphasis on not only neutral alignment through the wrist and elbow, but keeping the shoulder packed and down.

Once I was comfortable with her receiving position, it was time to actually snatch. There were two things I did here that I feel helped:

I’m not kidding when I say this, but I bet within 5-10 minutes we had her snatching pretty darn well. She obviously needs more time and reps, but I was very pleased with her technique improvements in this short amount of time.

With 20 minutes left on the clock, she mentioned that her Crossfit affiliate does quite a few cleans, so I figured we should spend some time training them as well.

I honestly feel the KB clean may be the hardest lift to coach and perform properly. The timing and feel is just a lot different than the swing/snatch.

The biggest issue you’ll see with cleans are the following:

The over-swinging is easy – you need to give them a target and say “if it gets higher than this, you’re going to get beat up.” I honestly feel like the lower you can finish and start to initiate your catch, the easier it will be (within reason).

With regards to letting the ‘bell drift, part of this is over-swinging, but another component is failure to keep the lats tight.  I cued her by having her arms by her side and “pulling” back into my hand to show her how to engage her lats.

Once we did these two things, we saw an immediate improvement in her clean. Not quite as well as her snatch, but still much better.

As you can see, we accomplished a ton in one hour. We cleaned up her swings, got her snatching fairly proficiently, and even ironed out some of the major kinks in her clean. All-in-all, I would say this was a fairly productive day!

For homework, I told her to try and do some swings daily. With only 15 and 20 pound kettlebells at home, I mentioned that her goal should be to perform 50-100 swings per day, and then dabble with some of the other lifts as well. The sooner she gets really comfortable swinging, the faster the other lifts will progress as well.

So that’s how I ran this particular session. What would you guys have done?

Any other tips/tricks you’ve used to improve performance?

If so, I’d love to get your feedback below. Thanks!

(Lead Photo Courtesy of Wilson B)