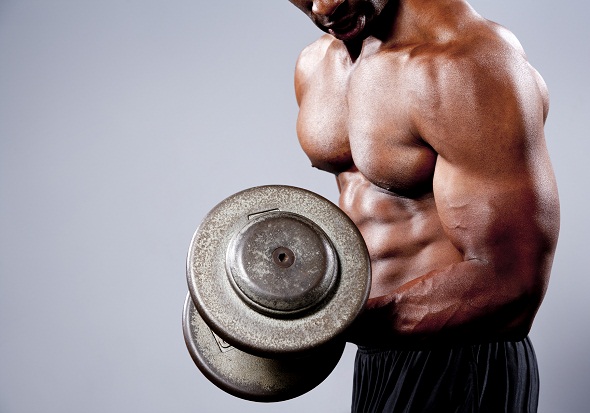 Mike’s note: I’ve got yet another guest post for you from my boy Dan Brown, IFAST Bootcamp Coach extraordinaire. Enjoy!

For those familiar with some of my writing and Force Barbell, you can see a trend that movement inspires people. It inspires change, thought, love and a bevy of other important qualities. I really do believe that. All of my best thoughts occur while moving.

During one of my cardiac output sessions (long story short, I woke up fat and weak one day, and I’m getting back into it), in an attempt to be a more well-rounded human being, I was reading a book on finance. As I was huffing up the incline, I had a great thought inspired by my movement.

I began recollecting on all the financially successful people I have trained and realized that the wealthiest people I have worked with were in pretty damn good shape, and if they weren’t when I started, they sure as hell were when I was done.

So this got me thinking, is there a correlation between bigger biceps (aka, better health) and bigger paydays? I think yes.

I know, I’m a skeptical reader, too, and I anticipate you are probably calling BS right now. But let me try to convince you with three examples of how bigger biceps means a bigger payday.

Once, when I was living in Chicago, I trained a fancy VIP executive at Staples. I didn’t think office supplies could bring anyone that much money, but this guy drove a beautiful red Ferrari, so what did I know?

I had been training him for about two weeks and we’d really developed a good rapport. It was interesting when I pushed him on his goals. I wanted a concrete goal so I could hold him to it, but he always told me he just wanted to maintain his current level of fitness.

I would always say to myself, “Who the hell wants to just maintain?! Why not go for personal records?” I figured he was just another guy in a fancy suit, zoning out for an hour before work, with no ambition for physical improvement.

After another week of me pestering him for a measurable goal, he finally said, “Look, I work about 80 hours a week. If I don’t do this I can’t keep up. If I can’t keep up, I won’t have a lucrative salary. I want the salary so my wife and I can travel when I retire, and so that my kids don’t have to worry about anything in the pursuit of their dreams.”

I never mentioned goals to him again during the time we trained together. He knew that Health = Wealth.

This was the best lesson I ever learned in health and fitness. All other goals are secondary to one’s health, because without health, good luck living a (physically and emotionally) wealthy life.

Another time, I trained two brothers who owned a start-up company. One was significantly overweight. I liked the guy. He was funny, loved whiskey, and was just an all around cool guy.

The other brother had no interest in exercise whatsoever, but wanted to support his brother. This was awesome because the duo wanted to train at 5am.

During the goal-setting session (a one-hour session – paid, mind you, because it is IMPORTANT), the brothers talked about not having the money to afford training more than once a week. At the time, I was charging $125 an hour. I may not have been worth the rate, but I was too stupid to think I wasn’t.

I told them that I understood the money objection, as they were strapped due to the cost of a start-up business. I told them they should seriously consider training as a business expense. I explained the “More Health = More Wealth” concept, in which more will physically be completed when you are in better health.

I explained that they would have more energy, more motivation, and just more spunk in general. They bought in, and bought training on a six-month trial agreement.

Here is the strange thing. Five months into training the two brothers, one of them bought a Hummer and eagerly showed it off to me. This guy was willing to drop $60K+ on a car, but was hesitant about spending a few thousand dollars on his health!

Having convinced them to invest in their health, I continued working with them for the rest of the year, as it was being written off as a business expense. When I left Chicago, they thanked me for the weight loss and credited me with having given them more energy and time to devote to growing their business. I was proud to have helped them.

I later got a card from them saying they were happy to have invested in me as a coach. However, I saw it as they took the opportunity to invest in themselves, the best investment anyone can make.

The best moment I have ever had as a coach came when I was fresh out of school.

I was hungry and on the grind, trying to make a name for myself in training. I went to Chicago and wanted to be the guy in Chicago everyone turned to for help.
I came across an Italian man; we will call him “Mr. Z.”  He was a well-to-do executive running a top excavating company.

Of all the athletes and executives I have trained, no one had as much cash as this guy.  He didn’t have a Ferrari, he had an airplane! I’m not talking about a little two-seater Cessna, either; he owned a full-sized jet. I never knew pushing dirt around with a bulldozer was such a lucrative enterprise.

During the assessment with Mr. Z, I was very candid. During an assessment, I will tell you the problem and offer solutions; it’s up to you to decide if you want to change your life.

To date, this is the only client I didn’t give the option to take it or leave it; his option was to take it. He needed my help worse than he knew. I became aware that money was not an object, and there was no conceivable way he could say no. I was going to travel to his office to see him four times a week.

Now that I look back on it, I should have charged extra for dealing with Chicago traffic, but I digress.

The assessment with Mr. Z looked like a Michael Jackson psych evaluation: red flags everywhere. The guy weighed nearly 400 lbs. His resting HR and BP were off the charts. He had the highest diastolic blood pressure I have ever seen (and keep in mind, I used to work as an exercise physiologist in a cardiac rehab facility)!

Even with all the Benjamins this guy had, I was surprised that he was able to afford health insurance. Insurance companies don’t want to insure time bombs.

For an insurance company, Bad Health= No Wealth. They want you healthy so they can collect your money and never pay for things like heart attacks.

Anyway, at the end of the assessment, Mr. Z had the audacity to say, “Yeah, I know I need to lose some weight, but I just don’t see the value in working together four times a week.”

I wanted to explode, but I didn’t. We went back and forth on a few points I made about the value of lowering his HR and BP and losing weight. None of it was impacting him at all.

Finally I got pissed, threw the assessment paper in front of him and said, “If you don’t change your ways, all that money, all that crap you buy, all the vacations, all the security for your family, is gone. You’ll be dead in three years.”

I paused for dramatic effect, and then said, “Take the paper and call me if you change your mind. Call me if you decide you want to live.” Then I walked out.

The next day, he called. He told me that what I said hurt, because it was true. He said he wanted to ensure the security of his family, and that was worth paying for my service four times a week. Health = Wealth; no other goals come before health.

I have a challenge for all of Mike Roberston’s readers and the Force Barbell gang.

I want sixty days from you. Thirty days to change you physically. Then I want thirty more, just to see what happens to your productivity.

If you are a business owner or a commission-paid employee, or even someone working hourly scrubbing toilets, I want to hear about your increases in business success. Did you make more money, close more deals, increase productivity, change more lives?

Health = Wealth, and no other goals can come before that.

Dan Brown is the creator of Force Barbell.

Force Barbell is dedicated to the pursuit of all athletic and physique goals. We believe that implementing coaching based on strong and sound scientific evidence, coupled with the ability to think outside the box, will greatly alter the physical culture of our country. More information can be found at www.forcebarbell.com.