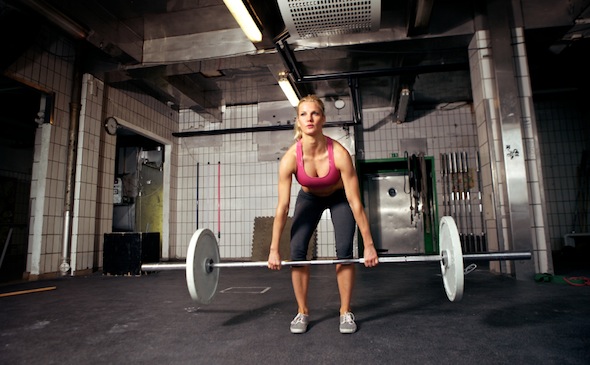 How Picking Stuff Up Can Be Totally Different

(Note from MR: This is a guest post from my good friend Wil Fleming. Wil is a very sharp guy and knows his stuff when it comes to O-lifting and power development, and I think you’re really going to enjoy this post!)

For a long time in my life I never picked up any weight without the intent to bring it to my chest or over my head, so the magic of the deadlift escaped me.

If I wasn’t moving it fast why did it matter if I could pick it up?

Not to mention, if I had ever deadlifted in training there is no way that it could be difficult to do, right?

As my training goals changed from track and field to general fitness, I found out the hard way that I was no good at lifting maximum weights from the ground. There was a disconnect as wide as Subway Jared’s backside before finding the veggie delight.

I realized that my years and years of Olympic lifting had set me up to lift heavy weights off the ground at high speeds, but not MAXIMUM weights.

It should be noted that lots of great Olympic lifters have tremendous deadlifts.

The US’s own, Kendrick Farris (187 lbs class) has deadlifted over 600 lbs raw, for instance.

I was not one of those athletes.

Coming to grips and figuring out the differences has made me a much better deadlifter, and even a better Olympic weightlifter.

So what’s the difference?

On the surface there are plenty of differences between the 1st and 2nd pull of the clean and the deadlift. The grip used, set up the shoes that are typically worn and the speed of the pull are all very different.

These are cursory when it comes to the differences between the two lifts but should be mentioned to frame the rest of the discussion.

In the deadlift the preferred grip is the alternate grip. This grip prevents rolling of the bar while lifting by pinning it between opposing forces of each hand.

Using this grip is ideal for pulling big weights but cannot be used in the clean because it prevents an individual from turning the bar over to rack it at the chest level.

The set up on the bar is highly individualized based on the torso length, leg length,  and arm length of the lifter. Deadlifters can set up with a very vertical torso, and while some Olympic lifters prepare the lift with a vertical torso, nearly all lifters have their torso around 30-35 degrees in relation to the floor when the bar breaks the ground.

Olympic lifting shoes are the typical apparel for completing the clean because they provide an extremely stable platform that does not leak any energy.

Seemingly this would be a great thing for deadlifts, but at maximal weights the forward inclination of the Olympic lifting shoe (to accommodate athletes in the deep squat position of the catch) leads to a lot of problems in the deadlift.

As a recreational deadlifter I find it best to complete the movement in bare feet.

The deadlift has one speed:

“Get the freaking thing up!”

Typically this means that the acceleration of the bar is negligible or even less than 0.

The clean pull on the other hand should have two distinct speeds: slow in the 1st pull, and fast in the 2nd pull. Deadlifts don’t get judged on their speed, cleans get made by more speed.

These are all things you know, so what are the real differences between the two lifts that have made me suck for so long at deadlifting max weights?

The first big difference in the two movements is the path that the bar needs to take to be successful.

Ideally the goal of the first pull of the clean will set up the 2nd pull to be successful. There is no such concern in the deadlift, and therefore the paths diverge immediately upon breaking contact with the floor.

The Olympic lift pull has a classic S pull pattern. Gradually moving in towards the body until the completion of the 2nd pull where the bar will move away slightly, and finally looping to completion at the top of the lift.

The deadlift pull on the other hand is ideally a straight line, but for many lifters makes a reverse S motion to pass around the knees.

Moving the bar around the knees is a huge mistake in the Olympic lifts.

Doing so cause the lifter’s center of mass to shift too far forward on the toes to complete the 2nd pull. This often results in a missed lift forward of the original starting position.

Difference #2 – Initiation of the Movement

Due to the bar path of each movement the way that lifters initiate the movement from the floor is very different.

Athletes in the deadlift lead with their shoulders. Lifting vertically on the shoulders starts the movement with an equal amount of hip and knee extension to begin the movement.

The clean, on the other hand, requires athletes to “get the knees out of the way” by focusing on knee extension at the start of the movement. In this way athletes are able to complete the classic S pull, without having to move the bar around the knees.

It should be said, though, that in each movement a constant torso angle should be maintained in relationship to the floor.

A common problem for many Olympic lifters is the hips rising faster than their shoulders (a “stripper pull,” if you will).

The stripper movement can be the bane of deadlifters as well.

Maintain the torso angle in relation to the ground regardless of how the lift is initiated.

Difference #3 – The Midpoint of the Movement

Reaching nearly complete knee extension in the first pull means that Olympic lifters need to re-adjust to complete the pull in a vertical manner. This leads to what is known by a million names, but is essentially a second bend of the knees.

In other words, the knees and hips must come forward to orient the lifter on top of the bar rather than forward of the bar.

In the deadlift this sort of thing happens when lifters hit the sticking point, but for most people isn’t something that should be taught.

Rather, as the bar passes the knees the focus is almost purely on driving the hips forward towards the bar.

In the video below you can see me doing some clean pulls and some deadlifts and then comparing them side to side. While I still have a lot of the tendencies of an Olympic lifter even with the alternate grip, this illustrates the points well.

These three big differences above are not where it stops, but only how I see them as an Olympic lifter.

There are plenty more, but identifying the differences has also made it very clear to me that there are a ton of  similarities between the two lifts.  Most of your time should be spent on taking advantage of the similarities.

If you want to know more about the deadlift, there is only one resource that I turn to, Mike’s post on the deadlift right here on this site.

I you want to learn more about how I teach the Olympic lifts, check out Complete Olympic Lifting, my DVD detailing all of my teaching progressions and corrections to make athletes better Olympic lifters.

P.S. – Complete Olympic Lifting is on sale today through Friday. Be sure to check it out today and save yourself some cash in the process!