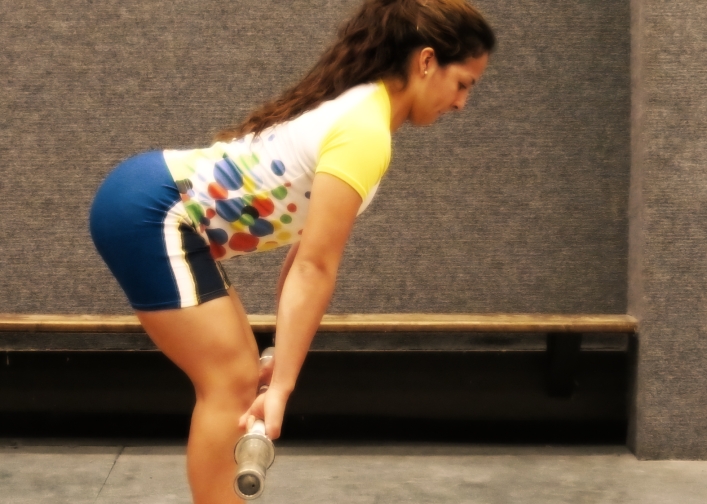 Note from MR: The following is a guest post from Aaron Cunanan. Aaron was an intern at IFAST several years ago, and a really sharp guy. I think you’re really going to love this post!

The Romanian Deadlift is one of the most important strength exercises out there and should be a staple in any training program.

Not only is the RDL great for developing glute and hamstring strength, but it complements the training effects of other exercises such as the Olympic lifts, squats, and deadlifts.

At its core, the RDL is a hip hinge movement, which generally involves a relatively fixed position of the knee and lower leg while the hips flex and move rearward. The hip hinge is not just bending over at the waist!

Let’s take a look at how to perform the hip hinge and how to use the RDL to improve performance.

A Movement for the Masses

The first group needs to learn the fundamental movement of the RDL—the hip hinge—before performing it with a loaded barbell. Many times, these individuals first need to teach their brain how to use and load their hamstrings and glutes. Once they learn the hip hinge, then they can perform the movement with added resistance safely and effectively .

Individuals with an improper strength balance usually have an unfavorable bias toward quadriceps, or knee, dominance. The RDL can be used to improve the relative strength of the posterior chain, bringing the bias toward a more favorable hamstring/hip dominance.

Make no mistake, I’m not saying people shouldn’t have strong quads. In fact, Mike has a great article making The Case for Big Quads.

It’s all about balance. And the majority of people could benefit from tipping the scales more toward the hamstrings and hips.

Figure 1. Comparison of the hip hinge and trunk flexion.

If the hips do not travel back (Panel 1B), then the load will primarily be placed on the lower back, with minimal load on the glutes and hamstrings. Not only does this improper technique reduce the effectiveness of the exercise, it increases the risk of injury by increasing the shearing forces on the lumbar spine.

After the breathe-and-brace, athletes should assume the power position. This position is characterized by a slight bend in the knees and hips; an upright, vertical torso; and the shoulders directly above or slightly behind the barbell.

When teaching the unloaded hip hinge pattern, have the athlete place their palms on the front of their thighs. The position of the hands will serve in place of a barbell.

Achieving the power position sets the knees at the appropriate position to perform the hip hinge. It also slightly pre-loads the glutes, facilitating a more natural movement.

The term “power position” comes from the Olympic lifts. For the uninitiated, the power position is the position of the lifter and barbell immediately prior to initiation of the explosive second pull.

It’s during the second pull that we see the tremendous power outputs that categorize the Olympic lifts as the most powerful movements in sport—hence the name “power position.”

Remember that the hip hinge is not just folding over at the waist. The hips must travel backward. This motion produces an eccentric load on the hamstrings and glutes.

Typically, I restrict an athlete’s range of motion to when the barbell reaches just below the knee caps. The torso will be nearly parallel to the ground in this position. However, it can be appropriate to further restrict range of motion due to mobility, strength, and/or motor control considerations.

Attempting to go lower than below the knee caps, or lower than an athlete’s functional range of motion, usually results in unwanted flexion of the lumbar spine. Athletes’ ranges of motion may increase as strength and motor control improve. A proper assessment and corrective programming can help address mobility-related issues.

Figure 2. Key positions of the RDL.

Cuing a tall posture and a proper breathe-and-brace technique are effective means to drive a neutral spine position.

Individuals with a posture of excessive lumbar extension and/or anterior pelvic tilt will experience increased compressive and shearing forces on the lumbar vertebrae and increased tightness in the hamstrings.

Such individuals will usually display limited range of motion during the hip hinge. You can read about how to reduce lumbar extension and anterior pelvic tilt here: Influencing Posture.

Head position is a function of cervical spine position. The tendency for many athletes will be to extend the neck during the descent of the movement. These athletes will appear to be craning their head up in order to look straight ahead.

Such a posture increases the compressive and shearing forces within the cervical spine. It can also cause reflexive extension of the lumbar spine—the effects of which are discussed above.

Cue athletes to keep their chin tucked and pulled back into their throat. This position may be unnatural for some but will enhance active stability and reduce injury risk.

A PVC pipe or long dowel may also be useful to provide tactile and/or visual feedback for maintaining neutral spine position.

The most useful indicator of whether athletes are performing the hip hinge properly is to check the knee-ankle relationship (i.e. shin angle). At the bottom position, athletes should have a vertical shin (shin angle = 0°).

The tendency for most athletes is to let the knees bend during the descent, resulting in a positive shin angle. This fault usually indicates general weakness and/or lack of coordination of the hamstrings and glutes. Many athletes are simply not used to loading their hamstrings!

The eccentric loading of the hamstrings during the RDL is a major reason it is such an effective exercise. Increasing knee flexion during the descent reduces the load placed on the hamstrings. As strength and coordination improve, the tendency to flex the knees will be reduced.

It is important to note that the knees should not be locked during the movement. The knee angle during the power position is the knee angle that should be maintained throughout the entire range of motion until the athlete returns to the start/finish position.

The following observable faults can be considered synonymous: weight too far foward, knees ahead of ankles (i.e. positive shin angle), hips too low and shoulders too far back (i.e. torso too upright).

If any of these faults occur, the simplest fix is to cue the athlete to push their knees back until they are in the proper position.

Because of the dynamics of the body segments involved in the movement (i.e. shins, thighs, and trunk), any cue to influence the position of one of the segments will effectively influence the other segments.

It is also possible to go too far in the other direction: knees behind ankles or fully extended (i.e. negative shin angle), toes may come off the ground (i.e. weight too far back toward heels), hips too high and shoulders too far forward (i.e. torso too horizontal).

To correct athletes experiencing this second set of faults, focus the athlete’s attention on keeping their feet flat. Others may need to direct more attention toward maintaining the position of the knees in space and pushing the hips back.

Some athletes may exhibit rounding of the shoulders, or flexion of the thoracic spine, toward the bottom of the RDL. Emphasize that the athlete sets up with and maintains an active core and lats during the movement.

Sometimes differentiating between “letting the barbell descend naturally” versus “reaching the weight toward the ground” is effective.

If cuing does not work, the athlete simply may not be strong enough to maintain proper position. In such cases, reduce the weight and make sure their program targets upper back strength and mobility.

There is one additional point to make if you include the snatch and the clean, or any of their variations, in your training programs. Ensure that your athletes set up with their elbows turned out (humeral medial rotation) and wrists rolled forward (wrist flexion).

These actions help maintain a more vertical bar path during the snatch or the clean, especially during the second pull, increasing efficiency.

Reinforcing these actions during accessory exercises, such as RDLs, barbell shrugs, pulls, and deadlifts, will make these actions a more natural part of one’s technique during the snatch and the clean.

As with any exercise, it is important to have a progression/regression model in place to accommodate individual needs and abilities.

An effective progression is as follows (click each exercise for a video demonstration):

The Slideboard/Swiss Ball Leg Curl can be programmed concurrently with the Unloaded Hip Hinge Patterning. The leg curl exercise is intended to develop basic strength and coordination of the glutes and hamstrings, while the hip hinge patterning is used to facilitate motor learning and programming.

Even if they progress to the pull through or the RDL, beginner and intermediate athletes may still benefit from performing some variation of the leg curl. Bilateral-to-single-leg or single-leg Swiss ball leg curls are great for developing pelvic control/stability. For added benefit, make the athlete perform one deep breath at the top of the movement before returning to the start position.

Such variations might be suitable for experienced and advanced athletes during general preparatory and/or transition phases of the training plan. However, assuming a sound foundation is in place, the RDL will better serve these athletes’ need for increased absolute strength.

The RDL is a great exercise in its own right, but it can also serve as a bridge to other movements such as the deadlift, snatch, clean, and kettlebell swing. The RDL and the “RDL Position” are progressions I use when teaching the deadlift and the Olympic lifts, respectively.

The popular notion is that weightlifters are known for their great quads; however, I have not seen a respectable weightlifter without a well-developed posterior chain. Put simply, a properly performed snatch or clean pull/deadlift is great for targeting the glutes and hamstrings.

The eccentric loading of the hamstrings and glutes during the RDL is the same type of loading that occurs during the first phase of the pull of the snatch and the clean. RDL’s are a great accessory exercise for weightlifters to strengthen the top half of their pull.

The hip hinge is a fundamental movement that athletes must master in order to maximize performance in the weight room and on the field. The RDL is the ultimate progression when it comes to the hip hinge pattern.

The RDL is an incredibly effective movement for developing strength and size in the posterior chain. It also plays important roles in teaching progressions and as an accessory exercise in strength training programs.

Use the progressions provided in this article to develop the hip hinge pattern for individuals that aren’t able to RDL quite yet, and apply the strategies outlined here to use the RDL to improve the performance of athletes of all sports.

Visit www.fiveringsathletics.com and “Like” our Facebook Page to stay up to date with more great articles from Five Rings Athletics.

Aaron Cunanan is the founder and owner of Five Rings Athletics. He created the company with the vision of helping others pursue Excellence through Sport. His primary role in this vision is as a strength and conditioning coach, applying the principles of long-term athletic development and sports science.

As an athlete, Aaron played rugby at the collegiate level before transitioning to the sport of weightlifting. He is a national level competitor with the goal of representing the United States in international competition. He also serves as an assistant coach at the USA Weightlifting Center for High Performance and Development in Shreveport, La.

Aaron received his master’s degree in kinesiology from Louisiana State University in Shreveport. He is an adjunct instructor in the Department of Kinesiology and Health Science at his alma mater. He teaches undergraduate courses on resistance training, theoretical and practical applications of strength training, applied anatomy and physiology of movement, and the sociology of sport. He has also guest-lectured graduate courses on the topics of periodization, overtraining, and applied anatomy.