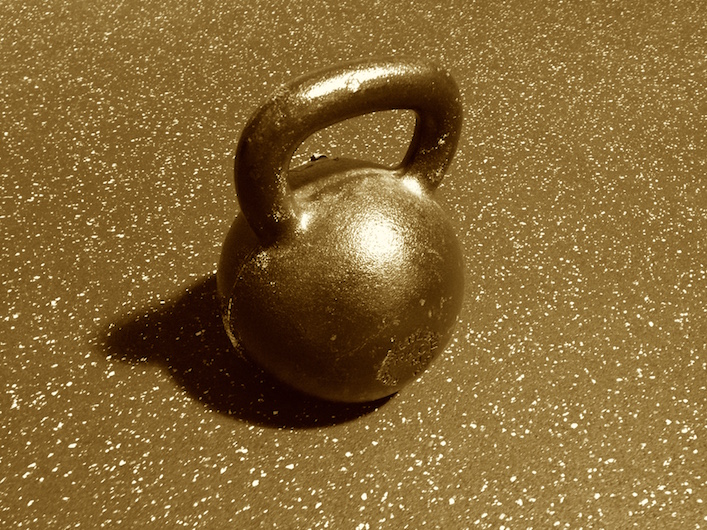 The other day I was having a discussion with one of my favorite athletes of all-time, the incomparable Danny O’Rourke.

Every off-season, DO comes in and we put together a program to help him take his game to the next level, as well as prepare him for the rigors of a 9-month MLS season.

He is a very thoughtful and intelligent guy, and over the course of our discussion he asked a very simple question:

“Are you doing anything new or different from what you did last year?”

While I like to think that I’m fairly vanilla in my approach, is question got me thinking about things that I have changed, tweaked or improved over the last year.

One of the biggest changes I’ve made is trying to get even more focused and specific with regards to my exercise selection with my athletes. Quite simply, I want to choose exercises that give them maximum carryover, either with regards to sport-performance, movement quality, and ideally, both!

And one thing I’ve found myself using more and more of are anterior-loaded kettlebell exercises.

Let’s discuss why you might want to consider using these exercises in your program, and then I’ll finish up with a few of my favorite kettlebell leg training exercises.

Before I get into why I love these exercises so much, let me make one thing abundantly clear:

Yes, I know the kettlebell purists are going to hate me for writing this.

I’m not going to write about cleans, snatches, long cycle or the like.

Instead, the exercises I’m going to depict are actually very standard exercises, but we use a kettlebell to modify and improve how they are loaded.

So while I’m obviously a huge fan of the traditional kettlebell exercises, all that I ask is that you be open-minded about how you can use these tools to get more out of your average, everyday lifts.

And with that being said, here are three reasons I feel as though you should give these exercises a shot!

Look, I know everyone wants to talk about the posterior chain (or P-chain, for short), but that’s soooooo 2008.

Nowadays, all the cool kids are bringing their training back to the middle and doing some serious anterior chain (or A-chain) training as well.

In all seriousness, the quads are a key muscle group, whether your goal is athletic development or more physique focused. I wrote an entire article called The Case for Big Quads, which is definitely worth a read.

When evaluating most of our clients, it’s obvious that there are serious imbalances between the muscles of the anterior core versus the posterior core.

And there’s no shame in my game here – I’ve been heavily influenced by the Postural Restoration Institute, and their methodology has changed how I coach my clients and athletes.

With that being said, I really feel as though everyone needs a ton of anterior core training. When you use the exercises below, not only do you develop the legs to a high degree, but the core as well.

This jumps off the previous point, but if we can agree that most of us live in a position of extension, or inhalation, then we need to choose exercises that allow us to train our legs without moving into excessive extension.

The lats are a muscle group we have to keep an eye on here. While we know they play a role at the shoulder, they often get pulled into the mix at the lumbar spine and low back as well.

If your lats are stiff, they can yank you into an anterior pelvic tilt/increased lumbar lordosis, so working around them can be critical in our program design. Again, I wrote an entire article the lats (Lats: Friend or Foe?), so definitely check that out when you have some free time.

But the cool thing here is that anterior loaded kettlebell exercises reduce the need for external rotation at the shoulder, which decreases the likelihood that the lats will kick on and yank you into a bad position.

Whether it’s reducing the influence of the lats as a spinal stabilizer, or strengthening the quads and core, I’m a huge fan of anterior-loaded kettlebell leg training.

Now I’m sure there are 1,000 derivatives of the exercises below, but here are my three go-to exercises, along with some coaching cues that I think will help you get more out of your training.

At the time I was still very powerlifting dominant in my training, so I’m not sure I really respected the movement at the time.

However, as my focus has shifted more towards training athletes, and thus developing more well-rounded athletes, this is now one of my go-to exercises, especially early-on in a training program.

Set-up with 2-KB’s in front of the body. I like to keep the elbows down to a degree, and interlock the fingertips.

The feet should be placed about hip/shoulder-width apart, with a small degree of toe flare. From this position, simply sit down/back, making sure the feet, knees and hips are in a straight line throughout.

Squat as low as you can without losing your lower back position, and think about “feeling” your entire foot while squatting down. Stay in control, and then think about using the quads and glutes to drive out of the bottom.

At the top, finish tall and reset before squatting again.

I’m obviously a huge believer in single-leg and split-stance work (which is why I create the Single-Leg Solution in the first place!), but the 2-KB variations take this stuff to the next level.

I always liked using anterior loaded variations of split-squats and lunges, but the barbell wasn’t ideal for two reasons:

The 2-KB version of the split-squat and lunge keeps you in a great torso position, loads the anterior core, and builds the quads to boot.

Set-up with 2-KB’s in front of the body, interlocking the fingertips to improve stability and control.

If you’re performing a split-squat, set-up in the 90-90 position outlined here. Exhale to get your abs/core turned on, and then think about dropping straight down.

Keep the entire foot on the floor, and then think about pushing through the foot to drive back up to the starting position.

For the reverse lunge, the goal is to step back into that 90-90 position. It’s obviously a bit more dynamic and prone to error, but if you’re in the ballpark of the 90-90 position then you’re doing just fine.

Last but not least we have the 2-KB step-up.

Much like the lunge/split-squat, I always liked anterior-loaded step-up variations, but they feel prey to the same issues.

Again, when swapping out a kettlebell for a barbell, you eliminate those issues and really get a ton out of the movement.

Performance on the step-up is pretty simple to coach, but definitely not easy to perform. Start by racking 2-KB’s in front of the body and interlocking the fingertips. One foot should be on the box with the foot/knee/hip in alignment.

From this position, think about feeling the whole foot and then driving through the midfoot to stand up onto the box.

Lower under control, again feeling the whole foot, and lowering back down the foot/knee/hip staying in alignment throughout.

There are obviously a million or more cues I can use here, but I really like to keep things simple.

Up to this point, we’ve assumed that the kettlebells themselves are enough to get you into a good core and pelvic position, but unfortunately, that’s not always the case.

What you may need to do is exhale to restore core and pelvic position first, and then inhale slightly (while keeping the proper position!) to improve stability.

And if that doesn’t make sense, here’s a quick video to better explain how to do this:

Kettlebell leg training isn’t the be-all, end-all of training, and I will never tell you that it is. The powerlifter/meathead that lives deep in my soul still loves the big, basic squatting and deadlifting variations, and I don’t think that will ever change.

However, I think there is definitely merit in using these kettlebell variations for specific clients, to get a specific training effect.

If you haven’t tried them in the past, give them a go next time you’re in the gym, as I think they can make a profound difference in your training!