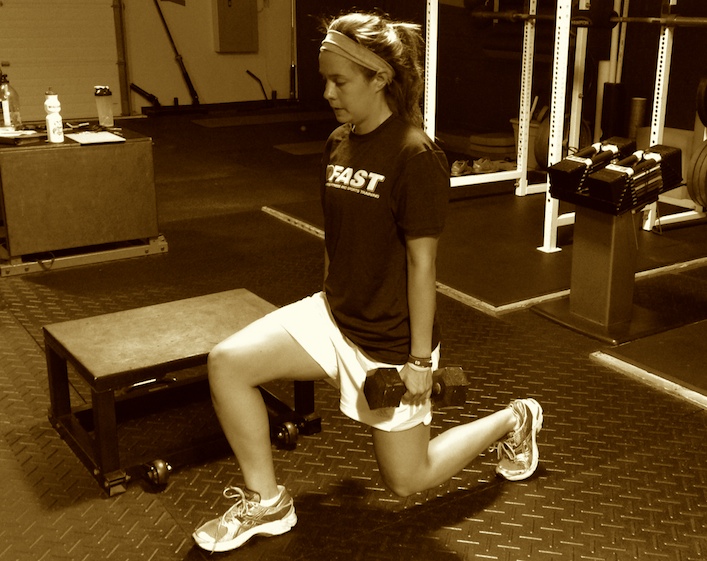 Last week, Kirsten (my amazing admin and the Wonder Woman of IFAST) posted a picture of me working with one of the new guys for the Indy Eleven. 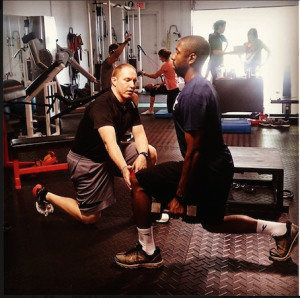 I’m an admin on the page, so I get a notification that another gym owner here in Indianapolis has commented:

“Better check on that lunge form.”

Now I don’t know about you, but I have better things to do than post snarky comments on people’s Facebook pages.

(Unless we’re “Friends” – in which case you’re basically begging me to post snarky comments!)

But I’ve posted the pic above, so you can see the guys technique.

As you can see, it’s not perfect – but definitely not horrible, either.

But rather than get into some sort of Internet battle royale, I figured it would be more productive to simply talk about proper technique a bit, as well as our role as coaches.

As the performance coach for the Indy Eleven soccer team, we’re currently in-season and we don’t get a ton of time with the guys in the weight room on a weekly basis.

It’s an incredibly long season, and the goal is to maintain their physical qualities (i.e. strength, power, conditioning).

By doing this and keeping them as fresh as possible, we give them the best chance for success. The goal is to have them recovered by Saturday so they can go out and win games on the weekends.

Furthermore, we’ll often get guys in on trial (i.e. trying to make the team) for a handful of days. Some of these guys have have minimal, or even no, lifting experience.

In the case of the above picture, this trialist had been in for about a week, and this was his first training session with us.

We hadn’t done an assessment on him.

I’d never seen him lift in a weight room before.

And I really had no clue about how well he moved.

The situation is far from ideal, but it’s the reality of how things work.

So on any given week, I could have 16-18 guys who are my “regulars”, and then another 2-4 who are new and trying to make the team.

Let’s start by getting one thing straight:

There is no such thing as “perfect” technique.

Everyone has different leverages, varying amounts of mobility and stability, and quite simply, everyone moves differently.

Even the best powerlifters and Olympic lifters in the world don’t have perfect technique. In fact, since lifting is their sport, they will often fall into the second group.

In other words, everyone can stand to work on their technique!

Now with regards to the gentleman above, is his technique perfect?

I’d love to get him into a perfect 90-90 position for his split-squat.

I’d love to see him exhale, bringing those ribs down a bit.

I’d love to see him also curl his pelvis underneath him a bit, to get a nice canister position where his diaphragm and pelvic floor are facing each other.

I’d love to see his weight balanced perfectly in a tripod position on the front foot, and able to drop straight down and stretch his rectus femoris on the back leg.

Quite simply, I know what perfect technique should look like – and no, we’re not there yet.

But really, that’s not the point.

The point is, when you look at one single picture of someone lifting, with ZERO background information, you have no perspective or context with regards to the situation.

But do you know where his technique was 5 minutes before this?

Or even better, 5 reps before this?

And I can tell you this much – this rep was vastly better than the previous ones were.

This is the key here – we’re always working towards better technique.

And once you think you have it dialed in?

I guarantee it can still be better.

But please understand that the continuum of “Acceptable” technique is incredibly long.

Another Example of Coaching & Technique

A few years back, I was working with a gal who originally came to us for weight/fat loss.

She was a very dedicated client, and eventually achieved her body comp related goals. Following this, she decided to move into more serious strength training, and her goal was to someday compete in power or Olympic lifting.

Her journey was far from easy, though.

First and foremost, she was incredibly unstable and, therefore, injury prone. Programming for her was not simple.

And to make matters worse, she flat-out didn’t move particularly well. While some people have very fast or malleable nervous systems, others really struggle to pick up new movements or adjustments in technique.

I often posted a picture of her overhead squatting in my training lectures, to talk about this very point.

If you saw a still shot of this woman overhead squatting, you may not be all that impressed.

But in that same breath, I’d tell you how much better this woman moved than before.

That it was as much about the progress we’d taken to get to this point, versus simply nitpicking her technique from one still frame.

In fact, when she first showed up at IFAST years ago, she couldn’t squat her bodyweight or perform a Goblet squat without pain in her knees.

So the fact that she could overhead squat with pretty good form?

To me, that was a huge victory.

My goal here isn’t to “call this guy out” as much as it is to bring up a very valid point.

As a coach, I have athletes of all shapes, sizes and abilities that I train.

Not one of them displays “perfect” technique. 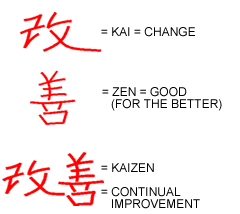 But the key is to take what you currently have in front of you, and every session, every week, make it a little bit better.

To dial in and get it closer to what you know (or think) ideal is.

Because Kaizen, or continuous improvement, is what coaching is all about.