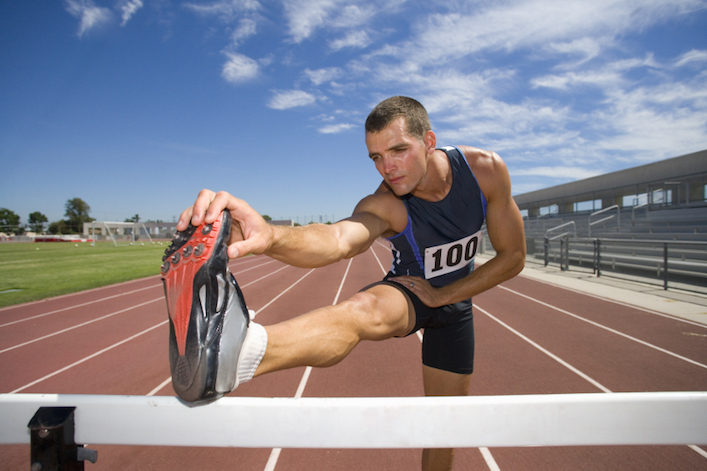 With spring right around the corner, there are a few things you can bank on:

I joke, but I’ve seen it first hand.

Last year when we started working with the Indy Eleven soccer team, more than a handful of the guys were dealing with hamstring or groin pulls.

So the question becomes, why does someone strain their hamstring?

And equally as important, how do we address the underlying issues to keep this from happening time and again?

Now I would be remiss if I didn’t at least mention the Postural Restoration Institute here, as their philosophy and way of thinking has had a profound impact on our work at IFAST.

So if you haven’t checked them out before, now would be a great time to do so.

While it’s easy to go the reductionist route and say there’s only one reason that people pull a hamstring (i.e. poor strength, poor flexibility, or whatever), that simply is not the case.

Most hamstring injuries are multi-factorial in nature. Here are just a few potential influences on injury:

Now I’m not a physical therapist, nor do I play one on TV. I’m a performance coach so I’m going to focus more on prevention side of the equation vs. how to rehab an acute hamstring strain.

With that being said, here’s a four-pronged approach to reduce the likelihood of hamstring injury with your athletes.

The starting point for improved hamstring health is improving posture and position.

Now I know what some will tell you – that posture can’t predict pain or dysfunction. And on one hand, they’re absolutely right.

I’ve seen some of the most toned-up, deep backed, anteriorly tilted pelvises known to man, and these athletes don’t have a hint of pain.

But I can also tell you this – just because it isn’t a problem now, doesn’t mean it won’t be a problem down the line.

More times than not if they continue down this path, or don’t improve stability through the anterior core and pelvis, they’re a pulled hamstring (or groin, or quad) waiting to happen.

If you came to IFAST for a training session, the first thing we’d work to do is reposition your pelvis. The beauty of the individual assessment is that we figure out the exact repositioning exercise that works for you, but give this one a shot if you’ve never tried a reset before.

One other thing to note: The goal here isn’t necessarily to give someone “perfect” posture (whatever that is), or to get rid of all of their anterior tilt.

If you’re working with an explosive athlete, extension isn’t necessarily a bad thing – it often makes them fast, powerful, or explosive.

It’s a checks and balances system, and you need your athletes to be able to control extension. Improving posture or position can go a long way to helping you do this.

Once position has been improved, now it’s time to actually strengthen the hamstrings.

If you’re immersed in the soccer community, you know that everyone wants to talk Nordic hamstring curls.

And if you’re not in the soccer community, a Nordic hamstring is simply an eccentric only glute ham raise. Many athletes don’t have access to a glute-ham machine, so they do this version where a partner sits on their ankles and they slowly lower under control.

However, there are at least two issues with the Nordic hamstring that I rarely hear people discuss:

We’ve used the Nordic hamstring with the Indy Eleven for the past year or so now with great results. In fact, by the end of last year we only had one guy on our team who was dealing with hamstring issues.

However, we didn’t just blindly jump into the movement – especially since we didn’t start training the team until the competitive season started.

If you’ve ever performed any version of a glute-ham raise, you know his is NOT an easy movement. Even 2-3 sets of 3-5 reps could leave your athletes sore for days.

Instead, we had to slowly but surely build strength and resiliency in the hamstrings over an eight week period.

Here’s a brief tutorial on a glute-ham exercise that should help as well:

Second, like every exercise it’s not just the fact that you program it for your athletes, but how you actually coach it that makes it more (or less!) effective.

When performing the Nordic hamstring with our athletes, we cue them to “get abs” first. To do this, we have them exhale to bring the rib cage down, and then think about rolling the pelvis underneath them.

This restores the pelvis to a more neutral position, and gives the hamstrings an improved position to work from.

If you use an appropriate progression to get the athletes’ hamstrings prepared for the movement, and combine that with improved coaching, I guarantee your athletes will be healthier as a result.

Hack #3 – Stabilize and Strengthen the Core

When it comes to hamstring injuries, it’s obvious that strengthening the hamstrings is important. The “pull down” on the back of the pelvis, which helps restore a more neutral pelvic alignment.

But I think too often that’s all a coach focuses on, when simultaneously, they should be placing an equal emphasis on controlling the front side of the pelvis as well.

If an athlete lives in a position of extension from top-to-bottom, the front of the pelvis is tipped forward.

And when the front of the pelvis is tipped forward, the abdominals are put into a lengthened and weak position.

Now keep in mind, your athletes may have abs that look as though they’re chiseled out of granite – especially the rectus abdominus, or six-pack muscles.

But good looking abs, and abs that can control your pelvis and low back position, are often two entirely different things.

What we need in this case are obliques (both internal and external), and a transverse abdominus that can help control the pelvis from the front.

How do we do this? I’m glad you asked!

To begin, it all starts with an exhale. Just like the Nordic hamstring, a full exhale allows our lower rib cage to come down, and our pelvis to “tuck” underneath us slightly.

From this position, every single ab exercise that I’ve discussed in the past (leg lowering, dead bugs, planks, etc.) will be more effective.

On the other hand, if you’re starting these exercises in an extended posture (or state of inhalation), you’re going to consistently miss the mark.

My good friend and business partner Bill Hartman has a saying:

In soccer, it’s been shown that the likelihood of hamstring injuries increases towards the end of each half.

So we could do all the right things in the gym with regards to repositioning the pelvis, strengthening the hamstrings, and stabilizing the core/pelvis, and still get injured if we can’t resist fatigue!

Now this is a whole ‘nother can of worms that I’m not going to dive into in this post. However, I firmly believe you need a mix of energy system training and development if you want to keep your athletes healthy.

My general recommendation is to develop a low-intensity base first, and then follow it up with more intensive methods to widen the aerobic window.

From a tactical perspective, smart substitution patterns in every sport can make a huge difference as well.

At the end of the day, just remember that you can’t talk about a holistic hamstring health program and not discuss proper conditioning.

I think at one point or another, we’ve all been on the “hamstring stretching” or “tight hamstrings” bandwagon.

Because outwardly, it makes sense – if someone is tighter than cable wire, then they need to stretch. Right?

However, we’ve talked ad nauseum about the position of the pelvis. If I make no other point crystal clear today, I want it to be this:

If you’re dealing with an extended athlete (anterior pelvic tilt, deep lumbar lordosis, anterior weight shift, etc.) then their hamstrings are in a long and neurologically weakened position.

So you know what stretching will do?

Here’s an awesome video in case you want a better visual:

I’ll let you answer that, but I think you already know the answer.

So there you have it – a four (and really five!) step approach to getting your athletes’ hamstrings healthy once and for all.

Use the tips I’ve provided above, and I’ll expect to hear back from you when your athletes are moving and feeling better than ever!