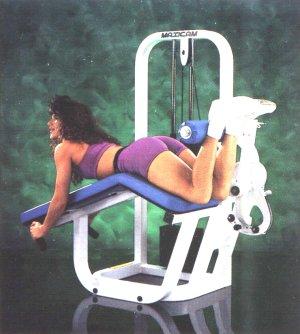 Thanks for sharing this story – very insightful.

\”You know the feeling – the first time you do a glute-ham is like none-other, and you quickly realize that the leg curl machine is pretty much useless.\”

But at risk of incurring your wrath (since you’ve likely been asked this a thousand times before), do you see leg curls as having a place for any goal at all? For this question, assume that the person is already doing things like GHR’s, slideboard leg curls, Swiss Ball SHELC, etc. (not to mention hitting deadlifts hard, using reverse hypers, and all of the other productive stuff lifters should be using at one time or another) and is considering these as something to add on for brief periods of time rather than as a way to avoid doing the “hard stuff”.

Not that a top coach using any given exercise is proof of its value, but Charles Poliquin has leg curl machines in his facility, and I am assuming he doesn’t have them there simply for the sake of increasing his expenses or having something worthless sitting around the facility.  Furthermore, you’re one of those coaches who rarely singles anything out as totally worthless, merely as a tool that may have broad or limited application depending upon the context.  As such, I figured you’d be one of the go-to guys for answering this question.

I get a lot of questions about the differences between leg curls and glute-ham raises, so let’s discuss this a little bit further.

One of the key benefits of glute-ham raises is the fact that you can get a co-contraction of the gluteals and abdominals while performing the exercise.  This is similar to a stabilization pattern that we’d like to see in many of our athletes.

In contrast, what we often see are athletes that hang on their hamstrings, hip flexors and lower back muscles to get said stability.

A properly executed glute-ham raise engages the core and gluteals (maintaining hip extension), while then utilizing the hamstrings to promote the movement.

To answer your question, there are times when I might consider using the leg curl in a specific client’s program. For example, if a client was a bodybuilder, figure athlete, or any sort of physique athlete, their goal may be solely to develop hypertrophy in the hamstrings. In this case, a leg curl may be beneficial.

Remember, if your goal is solely to maximize muscle hypertrophy, machine-based training could be of value. It may not be my first option, but it would definitely achieve their goal of building bigger hamstrings.  When in doubt, remember this simple equation:

In most cases, I would always choose glute-ham raises over leg curls. However, I like to see both sides of the equation and could make an argument for leg curls with clients who have physique-specific goals.