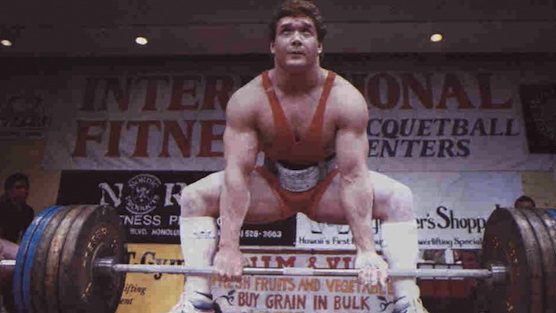 A few weeks back, there was a pretty epic training session at IFAST.

Our “Meathead Training Hour” (as I’ve come to call it) is always the most intense training time at our gym, but there was just something in the air that that took this workout to the next level.

Along the way, I was reminded of an all-important lesson:

Arousal is a bell curve.

Unfortunately, on this particular day, I got TOO jacked up.

“But Mike – you’re a powerlifter. You’re supposed to rage and get jacked up, right?”

First off, I train like a powerlifter and yes, I’m going to compete again.

But let’s be realistic here: No one is going to confuse me with Jim Wendler, Jason Pegg or Dave Tate when it comes to maximal strength levels. 🙂

What I want you to do is watch the following video, and seriously consider muting the sound if you’re anywhere remotely important and/or public. Lil’ Stevie had some interesting musical selections looped in to this one!

Now if you’ve got a trained eye, you might’ve already seen the difference between my 455 and 495 lift. If not, go back and watch again.

It may be difficult to pick up on as you don’t see me before the lift or approaching the bar, but I was so jacked up that I actually completely changed my set-up!

Quite simply, I went stupid and forgot how to do something I’ve done about a bazillion times.

I wanted this pull.

I had my whole training crew in there, Pantera was blaring, and I knew hitting this weight would put me well on my way to hitting the numbers I want (and expect) to hit.

But getting that jacked up actually detracted from my performance!

This is a great training lesson for many of you. Let’s look at arousal in a couple of different ways.

Firstly, the level of technical difficulty in your chosen skill is going to influence how much arousal you need. Olympic lifters, for example, perform a much more skilled/technical lift than powerlifters do, so their general level of arousal should be less than a powerlifter.

Now think about the difference between a lifting event, and a skill event like archery. Almost any arousal in that sport can throw you off, which is why they test for performance aids like beta blockers to see if you’re cheating by calming yourself down!

For powerlifters, think about the difference between a squat and a deadlift. Sure, you need some technique to be successful at either lift, but the squat is a much more technical lift overall than the deadlift – and there are a lot more ways to screw it up!

This is why you can often see someone full-on raging before they deadlift; it may not look pretty, but since it’s technically less demanding, sometimes they can just grind it out.

I think this at least one of the reasons that you can often pull a lot more early in your training career compared to your squat; it’s less technically demanding and you don’t need to control your emotions/psych/arousal as much.

To help illustrate my point, watch these videos of Ed Coan, one of the greatest squatters of all time. Most importantly, watch as he approaches the bar:

When I see this I think not only focus, but controlled aggression.

This is something I’d implore you to try as well. When getting ready for a maximal lift, you don’t have to go bonkers, smash your head into the bar, and look like a raging lunatic.

Instead, get yourself “up,” but not so high you can’t focus on the task at hand.

Do your best to match your level of arousal with the task in front of you, and I think you’ll be pleasantly surprised with the improvement in your results.