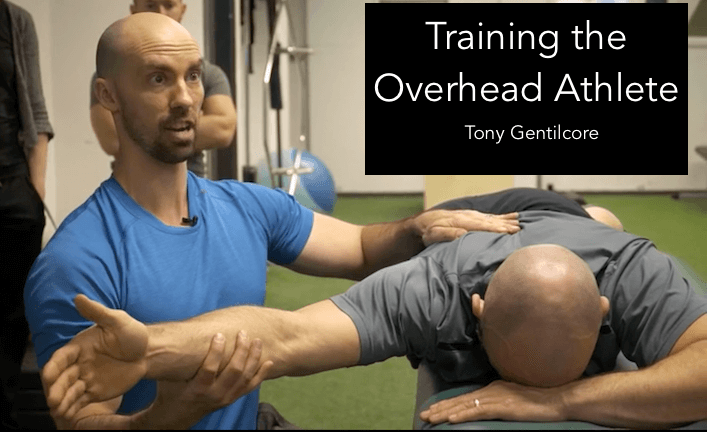 I’m slooooowwwwwwllllyyyyyyy recovering from the Physical Prep Summit this weekend, but I wanted to make sure I got some fresh content to you ASAP.

Tony Gentilcore is a guy I’ve known for years, and it’s been cool to watch him grow and evolve.

In today’s post, he’s going to give you the digs on training overhead athletes (he dealt with a few during his time at Cressey Sports Performance).

And if you enjoy the content, make sure to check out his new Complete Hip and Shoulder Blueprint product that just launched. It’s 11 hours of rock-solid material that is guaranteed to take your skills as a trainer and coach to the next level.

But enough about that – here’s Tony….

I’ve somehow gotten the reputation as one of the guys on the internet who hates overhead pressing. This is unfortunate because it’s not true; I only sorta hate it.

“People Need to Earn the Right to Overhead Press.”

I’ve long championed the above quote, and it’s something that came about via my eight years as a strength coach at Cressey Sports Performance.

Lets put it this way: If I had to make a list of the things I saw most frequently in my time at CSP it would look something like this (in no particular order):

CSP is known as the mecca of baseball strength & conditioning. Throwing a baseball, much less at 90+ MPH, isn’t remotely healthy for the shoulders. And you can bet there’s a lot to consider and a lot of attention to detail with regards to keeping them healthy over the course of a long season.

What’s more, understanding the unique demands of the sport (and the demands of any overhead athlete for that matter) plays a key role in the assessment process and subsequent program design.

And even if you’re someone who’s not an athlete, and the most athletic accomplishment in the past ten years has been winning your office Fantasy Football league…chances are, if you’re reading this site, you lift heavy things and/or coach people to lift heavy things… oftentimes overhead.

Unfortunately, the ability to lift one’s arms overhead – and to do so without any major compensation patterns – is a lost art in today’s society.

Think about what three actions must happen at the scapulothoracic joint in order to bring the hands overhead:

However, due to any number of factors – lack of anterior core control, tight/stiff latissimus dorsi, soft tissue restrictions, poor programming balance, poor exercise selection, or a combination thereof – contrary to “computer guy,” many people – overhead athletes and everyday meatheads alike – tend to live in a state of gross extension.

In both populations it’s a common theme that the above three actions – scapular upward rotation, posterior tilt, and protraction – are difficult to achieve.

As a result we see less than stellar scapular kinematics that often (not always) lead to injury or a speed bump in one’s ability to train effectively.

So Lets Try to Fix That S#!t

It makes sense that if someone is “stuck” in a more extended posture we may need to “release” or turn off certain muscles in order to get into a better position to move well.

A few common areas to focus our attention would be the erectors, pecs, and the lat/teres area.

Overactive erectors can “pull” us into a more extended posture. Standard foam rolling would be a great starting point, but lately I find using a mid and upper back release with my new favorite toys – AcuMobility Balls – to work well.

In addition, spending some time releasing the pectoral muscles would bode well too.

As well as the lats/teres minor insertion.

The idea here is to find the trigger point on the backside of the shoulder using a lacrosse ball and pin the area down. Once you find the spot – you’ll know it, trust me – you’ll then perform 5-10 “passes” moving your arm up towards the ceiling with each repetition.

Much like Mike, I too am a believer in PRI (Postural Restoration Institute) principles and have used them with great success with my clients. Helping it “reset” posture with focused breathing drills cam be a game changer – especially for those with shoulder pain.

To simplify things you can think of PRI as helping to break patterns of threat, which then help people get into better positions, which then allow for a window of better movement.

Which then allow people to piss excellence everywhere.

When working with overhead athletes, we’ve already established that extension is an overarching issue, and we can attempt to address it with some focused breathing drills like the All 4s Belly Breathing.

It helps to accomplish the following:

A few weeks ago I was presenting in Minneapolis talking about, what else, how I could totally beat Jason Bourne in a street fight shoulder assessment, and the topic of overhead mobility came up.

Broken record time: what three actions have to take place at the shoulder blades in order for ample overhead mobility to occur?

”You down with U.P.P?” (All 90s hip-hop aficionados know what I’m talking about)

A hashtag was born!

To that end, any drills we can implement which target the muscles that accomplish all of those things – upper/lower traps, serratus anterior – will be money.

Here are a handful of my favorites:

The key here is to make sure you push-away (protract) away from the wall to activate the serratus and then “walk” up the wall making sure not to allow the ribcage to flair. Be sure to also control the lowering portion.

Again, a key component to good execution of this exercise is to protract away from the wall. Also, I like to cue people to make the number “11” with their arms (don’t allow the wrists to extend) and to get the movement through the elbows.

It isn’t so much this exercise targets the low/upper traps or the serratus, but rather the hinge component (dipping the hips) allows the scapulae to upwardly rotate.

As far as low(er) trap activation is concerned this can be considered THE exercise. It’s much more coaching intensive than it looks and I’d recommend watching THIS video from Eric Cressey on the topic. Nerd alert….;o)

For those stuck in downward rotation this drill is very challenging. The objective is to use an elevated surface (a plate) to then protract the shoulder blade in a controlled manner.

Walk into any commercial gym or CrossFit box and you’ll witness any number of trainees happily pushing, hoisting, or worse…kipping overhead.

If we’re doing our jobs well as personal trainers and coaches we’ll implement proper assessment protocols and appropriate programming regressions and progressions to help best set people up for success.

Assuming someone does lack the ability to fully bring his or her’s arms overhead, it may surprise some that I don’t feel we have to avoid all overhead pressing.

Also assuming we’re addressing everything mentioned above, we can pepper in some “shoulder friendly” overhead pressing exercises.

Here we’re staying out of the “danger zone” but still allowing an opportunity to train the shoulders. What’s more, this is a fantastic rotary stability exercise too.

If we want to up the ante on the landmine press we can add a resistance band.

What does adding the band do?

I stole this idea from Joel Seedman a year ago and have been running with it ever since.

The bands make the weight move around unpredictably which adds a little more of a core demand. The idea is to go slow and controlled (which will also help increase time under tension).

You won’t need much weight here to feel the challenge, which is one of the reasons why I like the exercise so much. Because the load is relatively light(er), it’s less likely someone will compensate by extending through their lower back.

Credit to Joel Seedman for this one as well. This exercise is a great way to build core stability and overhead pressing.

You’ll use around 85-90% of what you’d normally be able to overhead press, but this will keep you honest and less apt to use “body english” to get the weight overhead.

Tony Gentilcore is a co-founder of Cressey Sports Performance where he served as one of the head coaches from 2007-2015. He now owns and operates his own training studio in Boston called CORE where he works with athletes and general fitness clients from all walks of life and is able play all the EDM he wants.

He contributes to some of the most reputable fitness publications like Men’s Health, Women’s Health, T-Nation.com. Bodybuilding.com, and STACK, as well as continues to run his popular website TonyGentilcore.com, where deadlifts and LOLCat memes run rampant.

The Complete Hip and Shoulder Blueprint 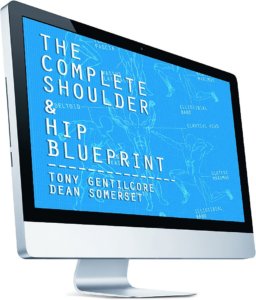 All told Dean and I have taught this workshop 15+ times all across North America and Europe over the course of the past two years. Each time we’d present in front of 30-50 health/fitness professionals, which is always awesome and an honor.

What’s more, and this is not to sound biased, Dean and I always received amazing feedback. If our workshop sucked, word of mouth would get out, and we wouldn’t have requests to keep putting it on.

We know the material is top notch and we know we’re helping health/fitness professionals get better. So, why not film the sucker and reach even more people? And that’s exactly what we did with The Complete Hip and Shoulder Blueprint.

I’m very proud of it.