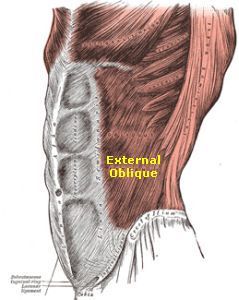 There’s been tons of talk lately about the abs, and even more specifically, the rectus abdominis (RA).  After all, everyone wants that lean, sexy six-pack before summer hits, right?

Here’s the problem:  We’re still caught up in outdated training methods, and not focused on what science has brought to light over the past 5-10 years.  Let’s take a quick look at the actual anatomy of your abs, as well as the various functions that your RA provides.

The RA is a large, beaded muscle that runs from your xiphoid process and bottom of your rib cage to your pubic symphisis.  It’s interesting (and important) to note that instead of being one long, continuous muscle, the RA actually is broken up into several smaller sections.  But more on that later.

The RA has several well-defined roles, along with some lesser-known roles, too.  Let’s examine each.

The primary functions of your RA include:

Let’s look at each in a little bit more depth, as this is where the story starts to unfold.

Any trainer or fitness enthusiast who knows anything can tell you the RA can promote flexion of the trunk.  This is why you’ve seen the ridiculous number of ab rollers, Bender balls, and other gimmicky guru crap being sold at 2 am in the morning for decades.

The idea, initially, was that sit-ups were the best to promote this flexion movement pattern.  Then, people started looking deeper and decided that sit-ups placed too much compressive loading on the back, or that they didn’t “isolate” the RA from the hip flexors.  Thus, crunches were deemed better for “isolating” the abs and keeping the back healthy.

The problem, however, is that while your RA is capable of producing trunk flexion, the underlying anatomy leads us to believe that this role isn’t nearly as important s the fitness industry has given it credit for.  At the Chicago Perform Better Summit in 2007, world reknowned spinal biomechanist Dr. Stuart McGill went so far as to say that if your RA was really there for crunching and trunk flexion, instead of having the beaded sub-sections, you would have one long, continuous hamstring instead!

1 – Trunk flexion works to shorten our RA. Doing so exerts a downward pull on our ribcage, effectively pulling us into an increased thoracic kyphosis or “slouched” upper body posture.  Not only is this aesthetically unattractive, but virtually useless to us as weight trainers, fitness enthusiasts or athletes.  By pulling our body into an increased kyphosis, we lose the ability to get our scapulae into the appropriate positions and increase the likelihood of shoulder and rotator cuff problems.

2 – Research by McGill and others has shown that repetitive flexion/extension of the spine is injurious.  Our spine only has so many flexion/extension cycles in it; once we hit a certain threshold, we get injured!

Mike Boyle has a great analogy here – it’s like a credit card.  Bend a new credit card back and forth and, initially, it bounces back.  But if you continue to bend that card, you eventually start to see a white crack.  Continue to bend it back and forth, and over time that crack leads to a break.  Your spine is not much different.

Here’s another way to think about this – instead of thinking about promoting movement, start to think about how your muscles work to control or resist various movements as well.  In this case, your RA not only promotes trunk flexion, but it also works to resist trunk extension!  It’s not rocket science, but it’s a huge step forward in your thinking.  Far too often, we only think of how muscles work in an open-chain, textbook definition, instead of what they do in real life.

However, there might be some exceptions to this rule – I can think of a few high-end athletes who might need some judiciously included trunk flexion in their programming.  For most of the population, however, hopefully we can agree that crunching and trunk flexion movements probably aren’t in the best interest of our bodies.

The second function of the RA is to promote posterior pelvic tilt, and/or to control pelvic alignment.  We can thank Florence Kendall and her fantastic book Muscles: Testing and Function for tuning us into this one.

(Note: If you are unfamiliar with the concept of force coupling or pelvic alignment, definitely check out my “Hips Don’t Lie” article.)

While many are focused on upper vs. lower RA, it only has one common nerve supply and therefore can’t be isolated into upper and lower sections.  Instead, what I feel most people are really focusing on when they think upper vs. lower abs is the difference between movements that promote trunk flexion, and those that control pelvic alignment and/or resist trunk extension.

Many people assume that exercises like leg throws and ab wheel rollouts must hit their “lower” abs harder, because they get so sore following these exercises (especially when compared to crunches).  The primary difference, however, is that these movements emphasize the negative portion of the lift.  Eccentric exercise has been proven time and again to increase delayed onset muscle soreness (DOMS), so it’s not so much that you’re training different muscles as it is that you’re shifting the type of training stress.  Or it could just be that you’re doing something “new”, which is also virtually guaranteed to make you sore.  It’s not necessarily better, it’s just different.  But I’m getting a little off target here; I digress.

While the RA does promote posterior pelvic tilt (or gets us back to neutral if we’re in an anterior tilt), it’s rarely the key to the puzzle.  For instance, Kendall cites the differences when testing someone’s strength in a curl-up/crunch versus a leg lowering exercise.  Often, you’ll see someone with no issues passing a curl-up test, but give them a leg-lowering test where they have to control pelvic alignment and they get crushed.

In this case, it’s not so much a matter of having a weak RA as it is weak external obliques.  Try this:  Have your client (or yourself) set-up in a pillar hold/plank position with a PVC pipe along their spine.  There should be three points of contact; the back of the head, the upper back, and the glutes.  Often, you’ll see clients who can keep their hips up, but they exaggerate their kyphosis and lose their 3 points of contact.  This is a classic instance of RA dominating the external obliques.

Instead of using all the muscles of the torso to promote core stability, their rectus dominates and “shortens,” pulling them into a slouched position through the upper back.  This is something that you’ll see time and again when testing/training both the general population and athletes as well.

Transmission of Stresses and Force

The final piece of the puzzle is promoting or transmitting “hoop” stresses that are generated from the obliques.  This concept was originally promoted by Porterfield and DeRosa in their book Mec
hanical Low Back Pain.

The idea here is simple – instead of working to promote movements around the lumbar spine, the RA (along with the rest of the abdominal muscles) was primarily there to prevent movement and transmit forces!  Again, this was a huge shift in thinking.

After reviewing McGill’s Ultimate Back Fitness and Performance for the 1000th time, I ran into this fantastic quote:

“Isometrically training the rectus is consistent with its architecture and stabilizing function to enhance performance and power development in the hips and extremities.”

Think about a baseball player, for instance:  Where does he generate his strength and power from?

I’ve never, in my entire life, seen a big hitter who didn’t have seriously jacked hips and thighs.  The premise is simple:  The hips/thighs store energy, and upon initiation of the movement transmit that energy into the ground.  The ground reacts, transmitting force up the leg, through the core, and into the hands and the bat.

This is a fundamental concept – the core doesn’t promote the power itself.  Instead, it transmits the power that the hips and thighs have generated.

This is why I’ve written almost a half dozen articles on the need for core and lumbar stability – and I’m not even going to get into rotation in this newsletter!  If you’re looking for training ideas, be sure to check out my YouTube page as well.

Lastly, I had an entire lecture on core training in the Indy Performance Seminar DVD series, and Eric and I talked in-depth about core training and core exercises in Building the Efficient Athlete.  Both can be found on the Products page.

Quite simply, if you want to get the most out of your abdominal training, you’d be well served to focus on exercises that optimize pelvic alignment and train your body to stabilize the lumbar spine.

Not only will you stay healthier, but you’ll perform better to boot.