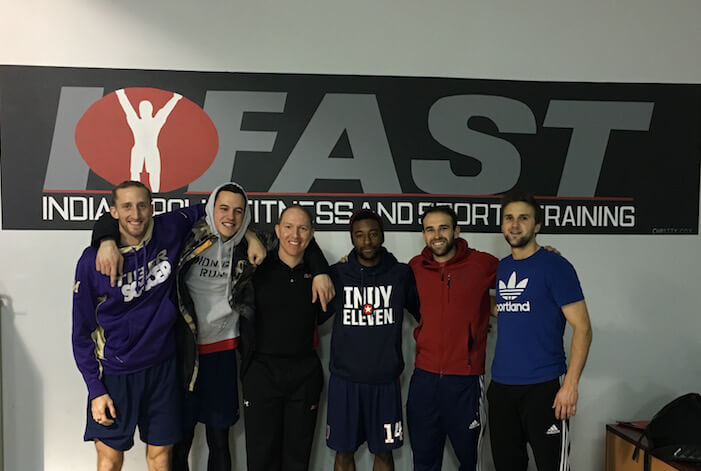 When it comes to writing and critiquing programs, I’m not sure anyone is harder on themselves than I am.

I’d like to think that over the years I’ve had quite a bit of success with athletes at all levels, but that doesn’t mean I’m not always tweaking and refining things to get to the next level.

One area where I’ve always wanted to improve was in my “Realization” training blocks, or the block right before you send an athlete off to camp.

When you think about it, this is where we make our money. You want an athlete that feels fast, explosive, and well conditioned going in to camp, because as my guy Joe Kenn likes to say: “Look good, feel good, play good.”

Once you get to the pre-season, all of the things you’ve done well as a coach (or perhaps, not so well) during the off-season will be exposed.

This year, I had eight guys from the Indy Eleven for a good portion of the off-season. Some I had six weeks, some eight, and others as many as 12. In case you haven’t been exposed to my off-season philosophy before, here’s a quick overview.

In the early off-season, I like to be a bit more general in my approach. The goal is to build movement efficiency, general speed/strength/power, and a conditioning base. There’s a lot of teaching going on during this time as well.

As the pre-season approaches, though, the training must get more and more specific. The goal is to prepare your athletes for the rigors and stresses that will be imposed upon them when they get to camp.

This article will provide an overview of my thought process when writing that final off-season training block, with the goal of having my guys ready to go in and dominate training camp. While it’s definitely geared towards soccer, I think you can take the general thought process and extrapolate it out to virtually any sport.

We all know that athletes get sore the first week or two of training camp.

The question is, WHY?

If a guy has done absolutely nothing in the off-season, then the answer is pretty simple. However, if a guy has been training hard, is there a way to mitigate some of this soreness?

I think as coaches we get really focused on force production, and miss the boat a bit when it comes to force absorption. That eccentric stress you get when planting and cutting a couple of hundred times during a practice is something that we must prepare our athletes for.

Therefore, one of my goals during both the speed and agility sessions, as well as the conditioning sessions, was to make the athletes change directions a lot.

Another area of emphasis is preparing the lower extremity for not only the planting and cutting, but the tremendous amount of running that occurs in soccer.

Now obviously you can go out and just have them run a ton, but the downside here is that they run a ton during the season. If you factor in pre-season and the competition calendar, you have guys that are running for 9-10 months out of the year!

Instead, I like to do just enough running to get them fit (more on this below), and then use low-intensity plyos to build tissue tolerance in the lower extremity.

This concept was really solidified for me when Joel Jamieson gave his Certified Conditioning Coach course here at IFAST. Aerobic plyometrics was the one aerobic method that I’d never really used, specifically because I didn’t know how to use it appropriately!

I’m hoping that giving the guys some of that low-intensity plyometric work is going to keep them healthier throughout their lower extremity not only in camp, but throughout the season as well.

When camp comes around, it’s go-time with regards to your conditioning. If a guy hasn’t done the right things leading up to this point, you’re really behind the eight-ball going forward.

Here’s how a general off-season layout looks with my athletes:

As you can see, Block 3 is where we bring it all together. We’re going to do the highest intensity work, we’re probably going to at least expose them to some lactic work, but more importantly we have to make the conditioning tissue specific.

This is where we have to pull everything together. Change of direction isn’t just important when you’re fresh, but how do you change direction when you’re fatigued?

And most importantly, can you do this for extended periods of time without falling apart?

This is where we bridge the gap from general conditioning work, to specific conditioning work. It’s not just manipulating work to rest ratios, but training the athletes in a context that helps mimic their sport.

The average soccer team has 10 athletes go down annually due to soft-tissue injuries. I believe the breakdown looks like this:

The numbers may be off a bit, but the message is clear – we must incorporate work to keep the hamstrings healthy!

If you want a comprehensive overview of what we do to prevent hamstring pulls, please read this article. At the end of the pre-season, we’ve already laid the base (good positioning, abs, hamstring work, etc.) so at this point we’re really putting the icing on the cake.

Admission time: Many moons ago, I was training a young athlete prepping for camp and I had her squatting and deadlifting heavy a week prior to going to camp.

I clearly remember watching her grind out reps and thinking to myself: “Why on Earth are we doing this? How is this going to translate to her sport?”

Strength was absolutely an issue for this girl, but this was a keystone moment for me as a coach.

As the pre-season nears, basic levels of strength should already be developed. Strength is absolutely a quality I want in an athlete, but when they’re heading to camp I want them to feel light, fast and explosive.

In a realization block you’ll see the heaviest emphasis on speed and power development. We’ve been building it all along the way, but this is where we really see the fruits of our labor.

This was solidified for me last week, as I’ve had numerous guys tell me this is the fastest and most explosive they’ve ever felt.

It’s anecdotal at best, but it tells me I’m moving in the right direction.

Last but not least, I put a premium on competition in this final training block.

This was most evident in the speed and agility work we started the training sessions off with. We had spent a good portion of the off-season building better movement patterns and teaching them superior strategies for acceleration, change of direction, etc..

However, the best way to make someone faster or more explosive is to force them to compete. This is really the only way to ensure that you’re getting 100% effort, and that they’re able to take those concepts you’ve built and actually use them at “game speed.”

Last but not least, not only is this the best way to get a training effect, but it’s a ton of fun for the guys as well. They love competing, and it gets them fired up and ready to start the season.

So there you have it – my general thoughts when pulling this final realization block together.

If you want to learn more about this topic, I’m actually going to use this as my case study for IFAST University this month. If you’re already a member, great! And if not, you can get your first 30-days at IFAST University for only $1.

I sincerely hope this article gives you some food for thought, and helps you write better realization training blocks going forward!