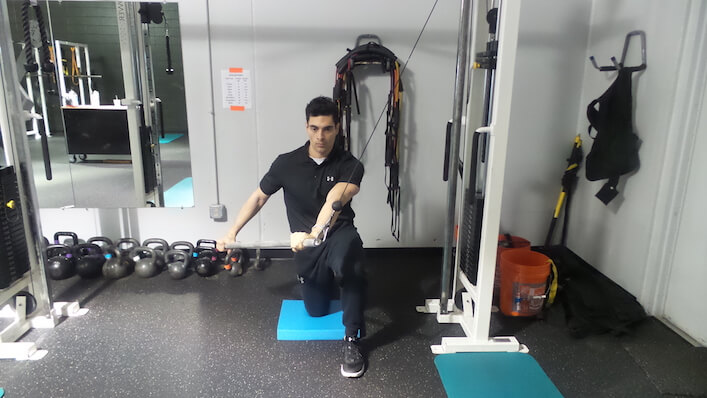 I don’t know about you, but I love making mistakes.

Okay, okay – maybe love is too strong a word. I don’t like making them at the time – but I firmly believe if you’re not making mistakes, you’re not doing everything in your power to get better.

A lot of my articles on here (as well as my videos, my seminar talks, etc.) focus on things that I’ve learned over the years.

And often, these learning opportunities have come directly from the mistakes I’ve made.

Here are the five of the biggest core training mistakes over the years. I hope that my honesty will help you get better results with your athletes!

Mistake #1 – Too Much Supine Core Work

When I was just getting started as a coach back in 1999 and 2000, ab circuits were all the rage. All you had to do was pick out 5-10 core training exercises, lie on your back, and flex and extend your spine into oblivion.

Luckily I got away from that stuff pretty quickly, but that doesn’t mean I truly learned my lesson.

When it comes to core training, all too often we think that it can’t be “core work” if we’re not doing it: 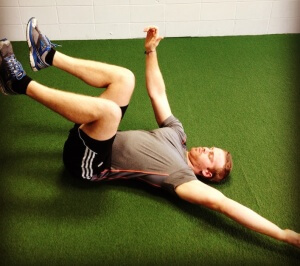 The “end of the session” part is a battle for another day, though. Let’s focus on the “on the back” part.

I’ve always thought (known?) that core training was important, and always strove to get a ton of it in my programs. One of the easiest ways to do this is to throw in a ton of supine core work.

Can you see benefit from this stuff? Absolutely. The benefits to ground-based/supine core work are numerous:

“But Mike – all those things sound great. So why is supine core work a negative?”

It’s not that supine core work is a bad thing. But like anything, it can be overdone (or used with too much exclusion).

And if we really want to play devil’s advocate, we can take those positives and make them a negative.

So let’s take that same list and flip the script:

Another key mistake I’ve made over the years was shying away from hip flexion work.

As with all of these mistakes, one of the biggest issues here is performance. If someone is doing sloppy hip flexor work where they’re unstable through their core and pelvis, they’re probably not getting a ton out of it.

However, athletes absolutely need strong hip flexors in combination with a strong and stable core.

Think about the movement of acceleration, which we see in virtually every sport: You’ve got an angled torso, and you want to impart maximum force down and back into the ground.

In acceleration, the core needs to be strong and stable, so that the hip can flex powerfully and position the leg to drive down and back. If the core is too weak or unstable, it becomes an energy leak and you lose that piston-like action we’re looking for.

If the hip flexors are too weak, you lose recoil and pop when you go to extend. I’ve never seen an athlete meekly flex their hip, and then powerfully extend it back. There needs to be balance on both sides of the joint, both for safety and control.

Another population that absolutely needs to learn how to use their hip flexors again are clients who come in with a swayback posture.

In a swayback, the pelvis appears as though it’s in a posterior tilt. However, what has probably happened over time is that this athlete has driven so much extension through their pelvis that it’s now drifted in front of the body, relative to the shoulders and feet.

If you think about the force coupling here, virtually everything on the front of the body is going to be long and weak – specifically the abdominals and hip flexors.

To rebuild their flexion patterns, these athletes need to learn how to effectively flex their hip again on top of a stable pelvis. Some of my favorite exercises here are mountain climber ISO’s, and band jackknife variations.

In my opinion, rebuilding solid a hip flexion pattern on top of a stable pelvis is one of the most important things we can do for our athletes, so don’t ignore it like I did!

When many of us hear the words “spinal flexion,” we subconsciously cringe.

We immediately envision an athlete bending over to pick up a pencil off the ground, and they spontaneously herniate a disc in their back and are crippled for months.

A lot of this stems from Dr. Stuart McGill and his amazing work in spinal biomechanics. McGill taught us that loaded end-range flexion is a great way to get injured, so we should avoid it.

But like most things, we often have a tendency to take a good thing too far. If you listen to my podcast with Doug Kechijian, he jokes about how he was so nervous about flexing his spine years ago that he would literally lock himself up in extension while brushing his teeth!

It’s funny, but at the same time, I think he was more the rule than the exception.

Spinal flexion is not a bad thing. It allows us to not only flex our spine, but restore flexion throughout our entire body as well (something that many athletes struggle with these days).

Flexion also allows us to re-position our rib cage and our diaphragm. When the diaphragm is properly position it helps us breathe, versus becoming a more posturally-focused muscle (thanks to PRI for that insight).

Now keep in mind as well that just because we have the ability to flex, and we maintain it, doesn’t mean we do it repeatedly (ala crunches and “ab circuits,”).

It also doesn’t mean we do it under load. For instance, this is not permission for you to walk into the gym, load up a max effort deadlift, and pick it up with a round back.

Just like locking yourself up in extension, that’s taking things too far in the opposite direction.

Do your best to get, and keep, your spinal flexion range of motion. Your athletes will perform at a higher level, and for longer periods of time, as a result.

Mistake #4 – Not Having More Progression

As I alluded to up top, I had a tendency in the past to get really locked up in certain areas of core development.

For periods of time, I loved supine core training. If I got an athlete in the gym three times per week, we were going to do a different exercise branch each time in (i.e. leg lowering one day, dead bug another, PNF patterns the next, etc.).

The goal, however, isn’t to see how awesome your athlete’s core strength is when lying on their back – the goal is to see how well they can perform in their given sport!

As such, something I’ve worked hard to improve upon over the years is to have progression built into the program. One way I do this is to challenge the core at multiple levels throughout the training program.

For instance, if a general program looks like this:

A more specific program could look like this (along with some cues/thoughts to help):

2A) Half-Kneeling Chop (building a split-squat/lunge pattern, but getting the requisite core/hip/pelvic stability first)
2B) 3-Point DB Row (reaching long through the down arm to engage abs)

3A) Tall-Kneeling Landmine Press (exhaling, pelvis up, locking in the abdominals, etc.)
3B) Front Plank (reaching long through the elbows, 3-point of contact, etc.

As you can see, all of these exercises are going to develop the core to a degree, and we’ve built in multiple postures and positions throughout the session (vertical, half-kneeling, prone/quadruped, etc.).

One final question becomes – what if you’ve used all of those “isolated” core exercises with an athlete?

This is common, especially if you work with an athlete for multiple years. In this case, I have no issue taking them “back to basics” at some point and doing a reboot.

If you think an athlete can’t get improve the execution of a simple exercise like a plank or a dead bug for a long, long time, you’re mistaken.

It’s like reading a good book time and again. The book doesn’t change, but what you take away from it is different each time, because you as a person are different.

Training is no different, so don’t be afraid to go back to the well time and again to milk each and every exercise for everything it’s worth.

Mistake #5 – Not Including Contextual Core Training in the Warm-up

This is the most recent mistake I’ve made, and one that I’m hoping I won’t make again any time soon.

If you look at the program example above, I hit the core in multiple ways throughout a training session.

However, something that’s critically important (and that I failed to do) was including contextual core work in the warm-up (BTW, thanks to Ty Terrell for the feedback here – it helped a ton!).

So first off, what does contextual mean?

Choose exercises that directly carryover to the movements or qualities your athletes are training in that session.

For instance, if it’s a powerlifter and they want to squat that day, maybe I would throw in more tall-kneeling work in the warm-up. 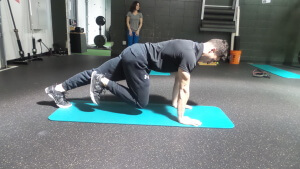 Tall-kneeling is a parallel stance core training exercise, which will help them more properly position their core, hips and pelvis when they squat.

If an athlete is working linear acceleration, exercises like mountain climbers or step-up chopping and lifting patterns could be of benefit.

Doing this prior to a training session helps create more context, so that the athlete can use the core in the postures/positions we’re training them in that day.

If you know anything about me, you know I don’t like being “cute.” I think that too often we overthink things when it comes to exercise selection, and we end up negatively impacting movement, motor control, or both, in the process.

However, giving your athlete some context with regards to proper core posture and position prior to a training session should pay massive dividends.

So there you have it – five of my biggest core training mistakes. 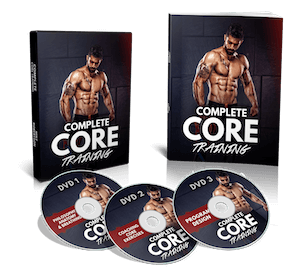 I hope you’ve learned a thing or two from this, and it will help you get better results with your athletes as a result.

Next week, I’m also launching my new Complete Core Training product. This product is going to give you a complete overview of how I train the core, and how to help your athletes get even better results.

If you want to learn more about Complete Core Training, be sure to check it out via the link below: